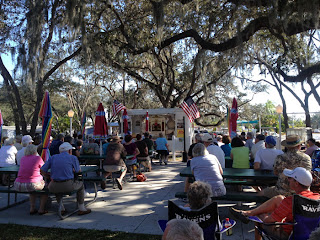 What's happening at Sun 'n' Fun lately? LOTS of stuff! This week there was a carousel band organ concert in the picnic area. A couple played 1900's music, explained the workings of the band organ, a background of old music was given, and there was audience participation and a sing along. Not quite Sparky's cup of tea, but these folks sure enjoyed it!

The music certainly made one think of old fashioned picnics in the park in the good old days of our grandparents. All that was needed was long dresses, big hats, and cotton candy!


Sparky has been attending swim exercise class at least three times a week. She's trying to get Eldo to get involved, but he's not that interested. He did come down and snap a photo to prove to Sparky's girls that she's trying to get in shape! 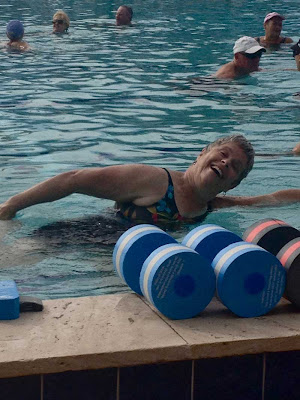 This week there's also a disc golf tournament. The course is too short for Sparky's liking (9 holes and very short distances out in the open sun), so we're going to pass on that. There's a Sounds of Soul show--Remembering the Hits of Motown, and an Indiana luncheon for park residents from the great Hoosier state--we're going! What else is going on at this fun place? A Bob Ross oil painting class, zumba, a chemical free gardening lecture, a photography class, pickleball, a lecture on managing hip and knee pain, a craft show, a free dance, and always the spa services--nails and pedicures, massage therapy, facials and wraps. Friday is "Wear Red Day"--It's the start of Heart Month.

Sparky's best friend of over 34 years, Jeannie, (and she's a teacher, too!) had just seen a financial advisor few days ago to plan on retiring at the end of this year. Two days after her appointment, she suffered a heart attack at 11:00 PM at night at the age of 63. She's ok. She had 100% blockage in one artery and had two stents put in....She's back at home recovering nicely. So Sparky will be wearing RED this Friday in honor of her friend, Jeannie.....Get well, quickly, Jeannie!

So Sparky wanted to share this with women readers: Women's symptoms of a heart attack CAN be very different from men's. Sparky's friend had NO chest pain, NO left arm pain. She had been on blood pressure medication. Here's what she DID have in the way of symptoms...

1) extreme fatigue leading up to the days right before the heart attack
2) she said she felt "weird" and had tingling and numbness in both hands and fingers
3) she felt like very nauseous and felt like vomiting but didn't
4) she had never felt like this before in her life, she knew something was very, very wrong
5) she had shortness of breath
6) she was sweating

Other symptoms women have described during a heart attack are:
1) pressure across the upper back, like a "rope being tied" around your upper back
2) dizziness, lightheadedness, or fainting
3) pressure, squeezing pain in the center of the chest
4) pain, discomfort in the back, neck, jaw or stomach


Heart Attack Signs in Women
If you have any of these signs, don’t wait more than five minutes before calling for help. Call 9-1-1 and get to a hospital right away.


She decided not to mess around and called 911. Sparky is so glad she did! Sometimes we women think we can "tough it out", most of us are MOMS after all, we've taken care of everyone else but ourselves most of our lives...Now it's time to pay attention to things our body is telling us as we age and Please--DO NOT IGNORE SIGNS & SYMPTOMS THAT SOMETHING IS WRONG! Better to be wrong about what we thought it was, than to do permanent, irreversible damage to our bodies, right? (And Sparky would be VERY guilty of ignoring body signals, so I'm gonna have to watch her like a hawk! says E.)

A trip over to Costco's today to stock up on supplies and sample FREE food, and that was our day!  Bye!
Posted by Jeannie and Eldy at 11:47 PM