Time to Visit the Grandson!

Sparky was so excited to get to go see her little grandson in Houston....It was a short visit, just four days, but Sparky had a ball! And so did little Barron. Sparky flew Spirit Airlines, and perhaps will not be flying them again any time soon. We were delayed at the Orlando airport for 2 1/2 hours ON THE PLANE because of "peeling paint" they said on a part of the plane, the cowling. After an hour or so, they did say we could disembark, but had to stay in the boarding area. We couldn't take off until all the proper clearance paperwork was done and the repair inspected to the 'nth' degree. Sparky got off with about one third of the passengers who chose that option, then waited, and waited and waited some more. She overheard some lady say she knew there was something wrong when she could see some sort of "duct tape" on the plane as she came on board...Yikes!....The captain did explain what was going on after a LONG period of time, so that information was appreciated. We eventually took off and Sparky landed in Houston uneventfully. By the way, Spirit charges for both carry on AND/or checked baggage...Their fares might be reasonable, but they end up getting you one way or another!

It didn't take long for Barron to remember Grandma from quite a few Facebook chats. Thank goodness for modern technology! Sparky remembers talking to her grandma and grandpa by her dad handing her old fashioned corded phone, saying, "HERE! Talk to your grandma and grandpa!" with having no idea what to say with awkward silences on both ends. Now, there's much more interaction and fun faces to be shared. Heck, you can read stories to your kids by FaceTime chat if you have an iPhone, or choose Skype, or Google Chat Room, or probably there are even more ways out there to connect! But attention span has to be there, too, lol!  Sparky is starting to lose ground with keeping up with technology, but at least she's very in the moment with talking to her little grandson by face time, he's almost three and growing oh, so fast......

He decided Grandma was going to be his latest and newest wrestling buddy! Within 15 minutes of arriving home, we were on the couch and Barron was tackling Sparky over and over and over. Of course she had to pretend that he was almost stronger than she, so she let him grab her by the neck and pull her down on the couch. He laughed and laughed. Grandma made all the appropriate groans and comments that he was just too tough! Barron likes to tickle Grandma Sparky, too. For some reason, he called his tickling, "mosquito bites" and he would say, "I'm going to give you mosquito bites, Grandma!" 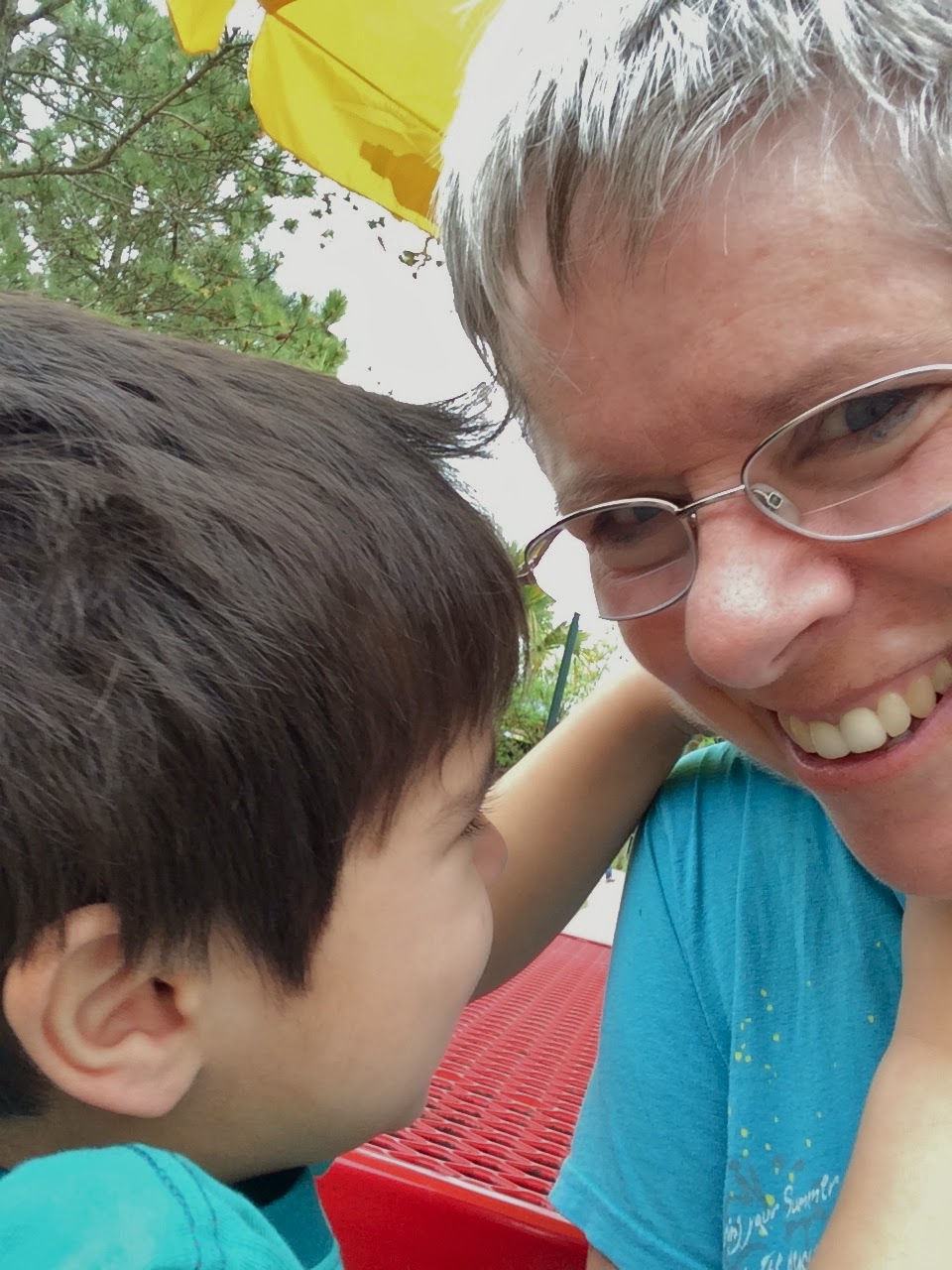 The second day Sparky was visiting, we headed off to the Houston Zoo, a MARVELOUS zoo as far as landscaping and layout was concerned. It was truly a very beautiful zoo! 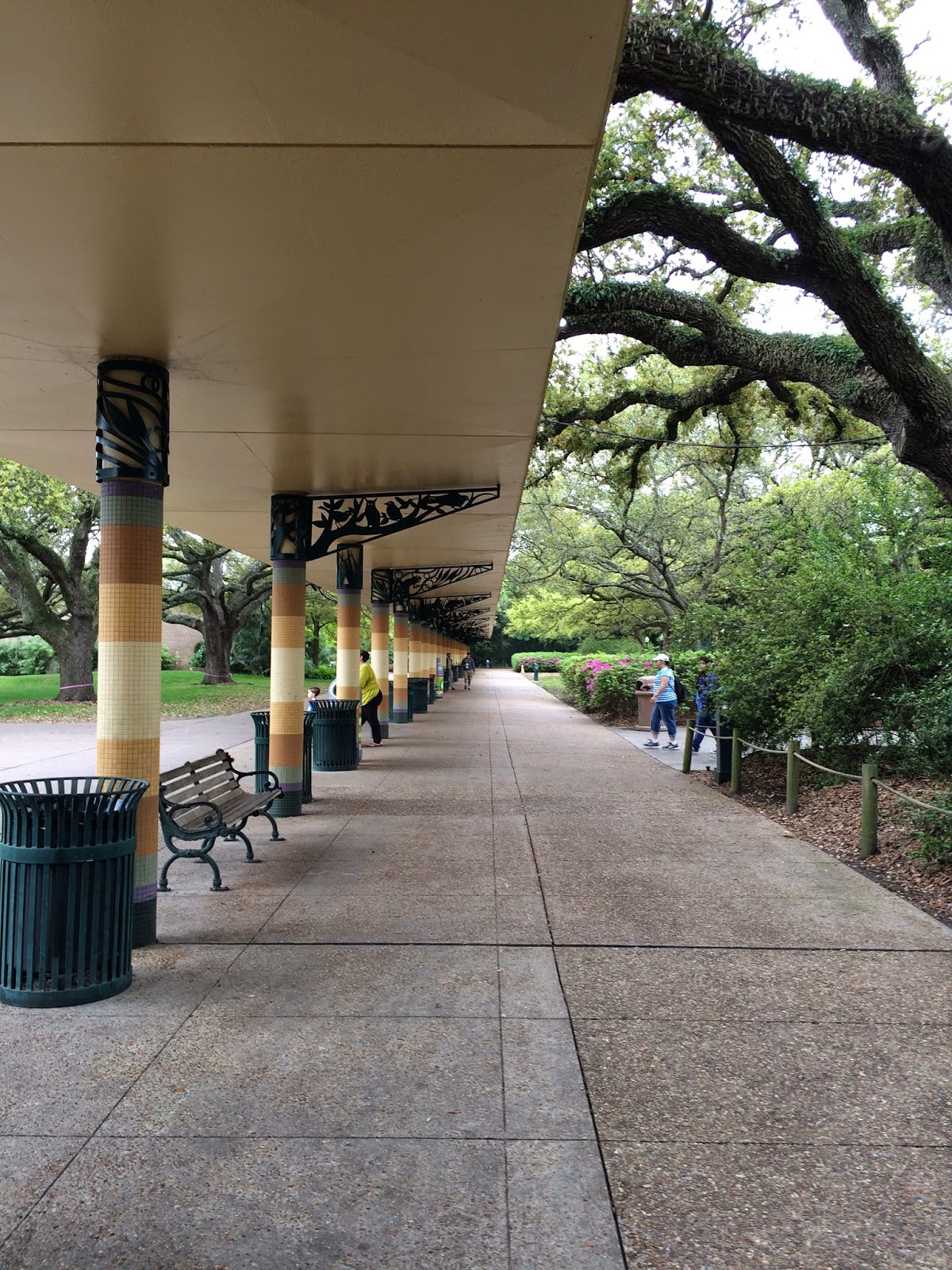 For seniors, 9.00 entrance fee---nice!  Barron LOVES the zoo very much and never tires of going....His favorite animals are probably the goats at the petting part of the children's zoo. The goat just quietly stood there and let him hug him quite a bit. He was very careful and gentle with the goat. 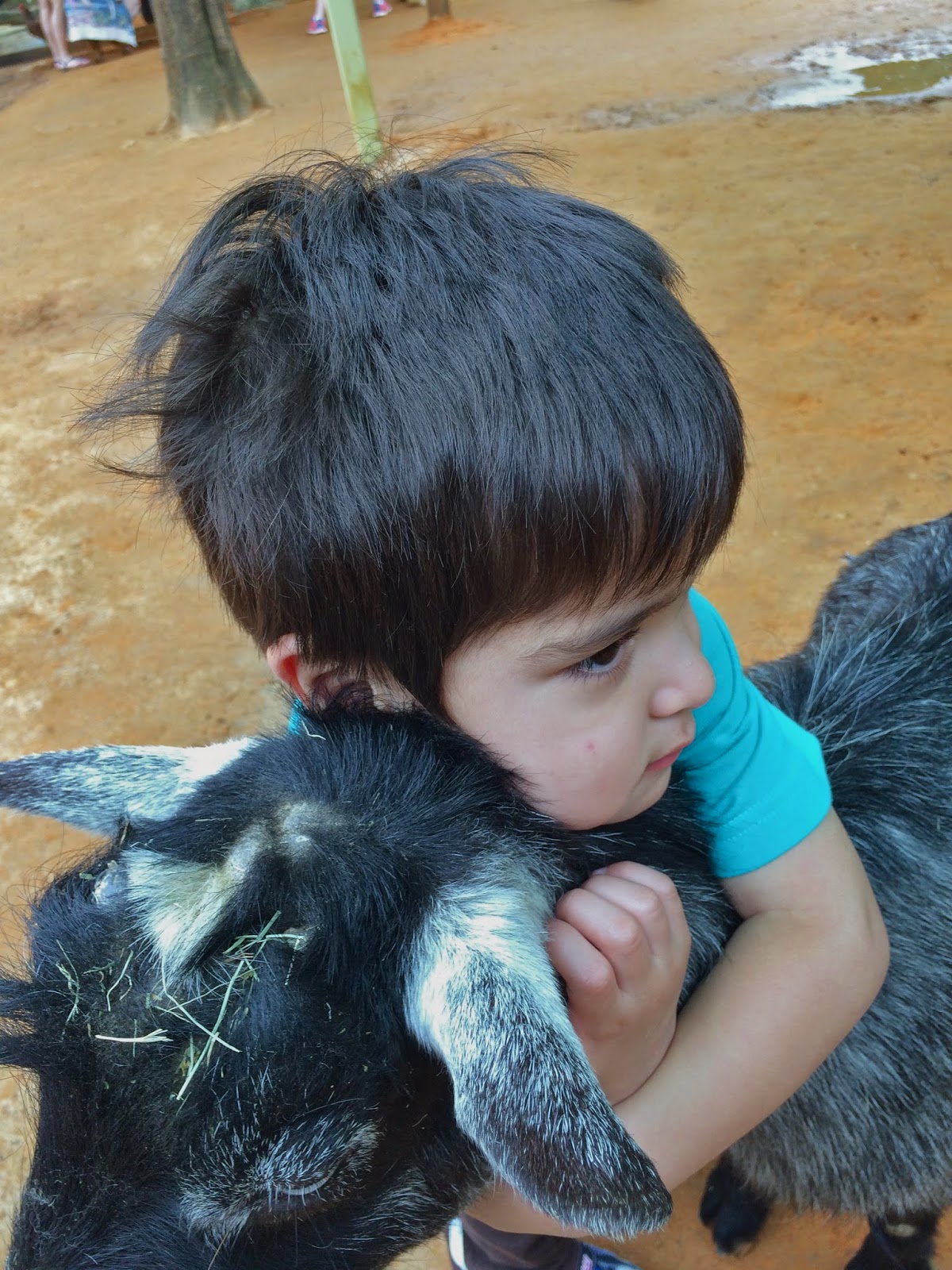 The children's section of the zoo was terrific! Congo drums to play.... 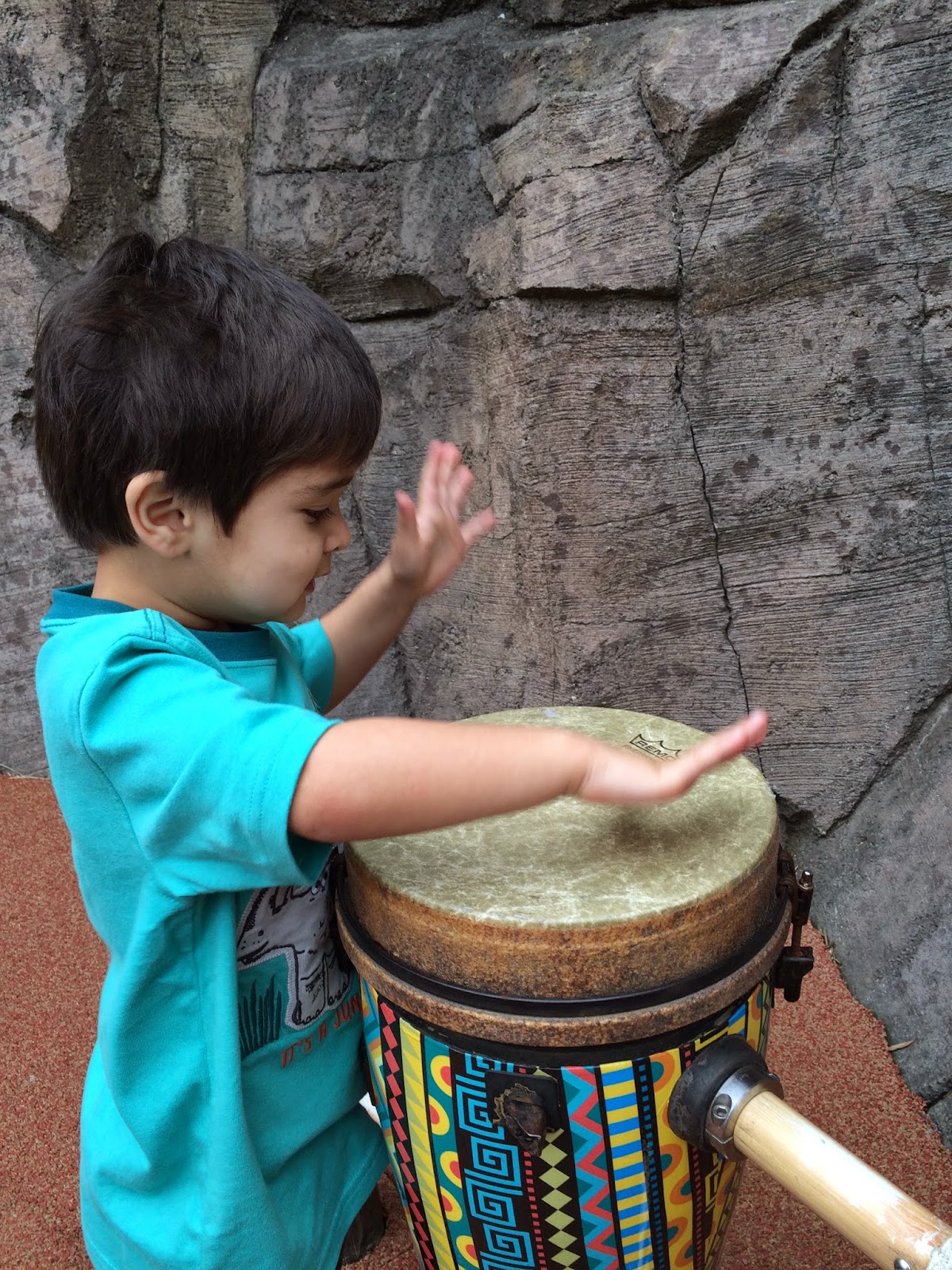 Lots of hands on learning....Even if he can't read yet....But he's learning, he knows LOTS of his letters, can sing the ABC song, recognizes numbers up to 20 and has a very sophisticated sense of humor! 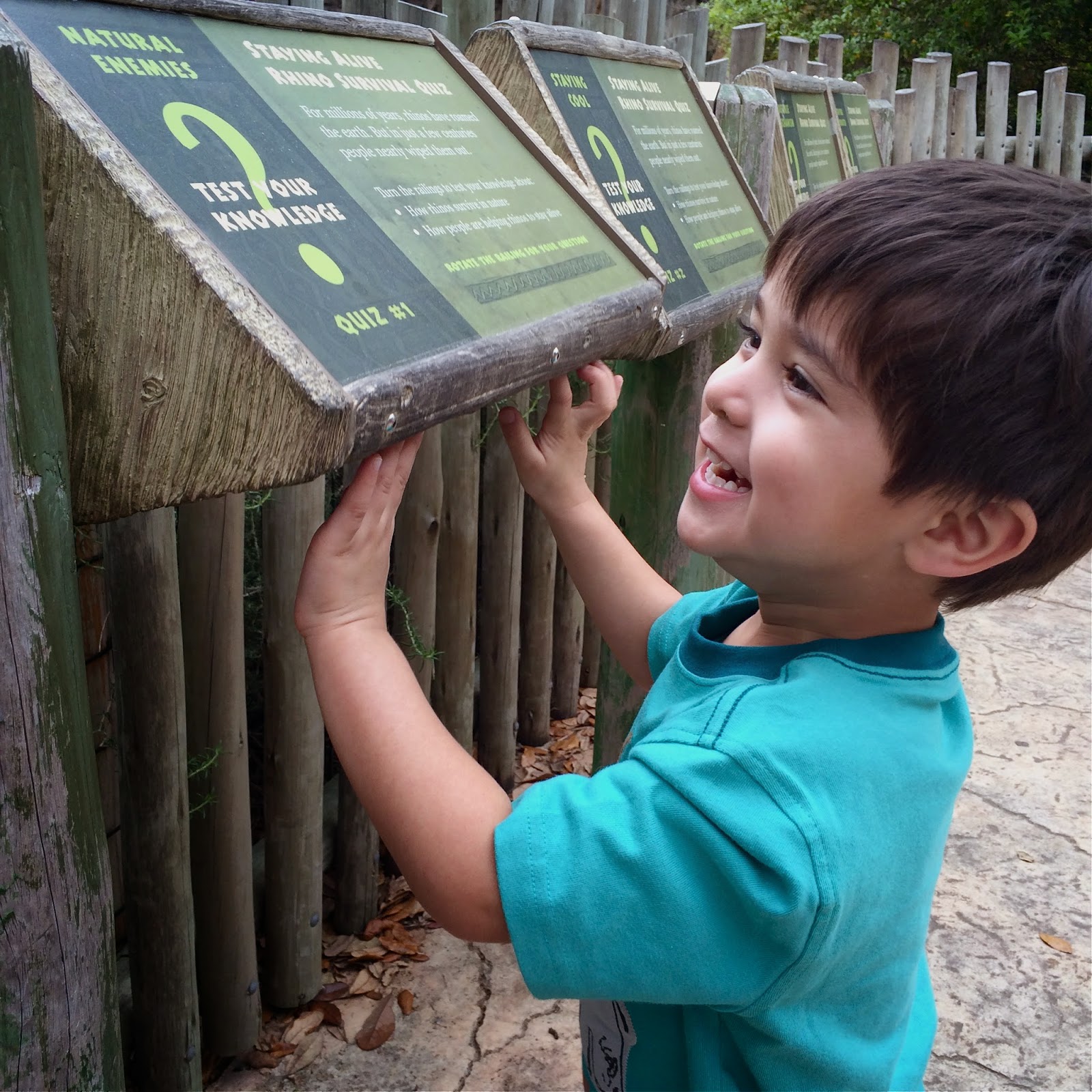 When he got tired of walking, he settled for Grandma's shoulders..... 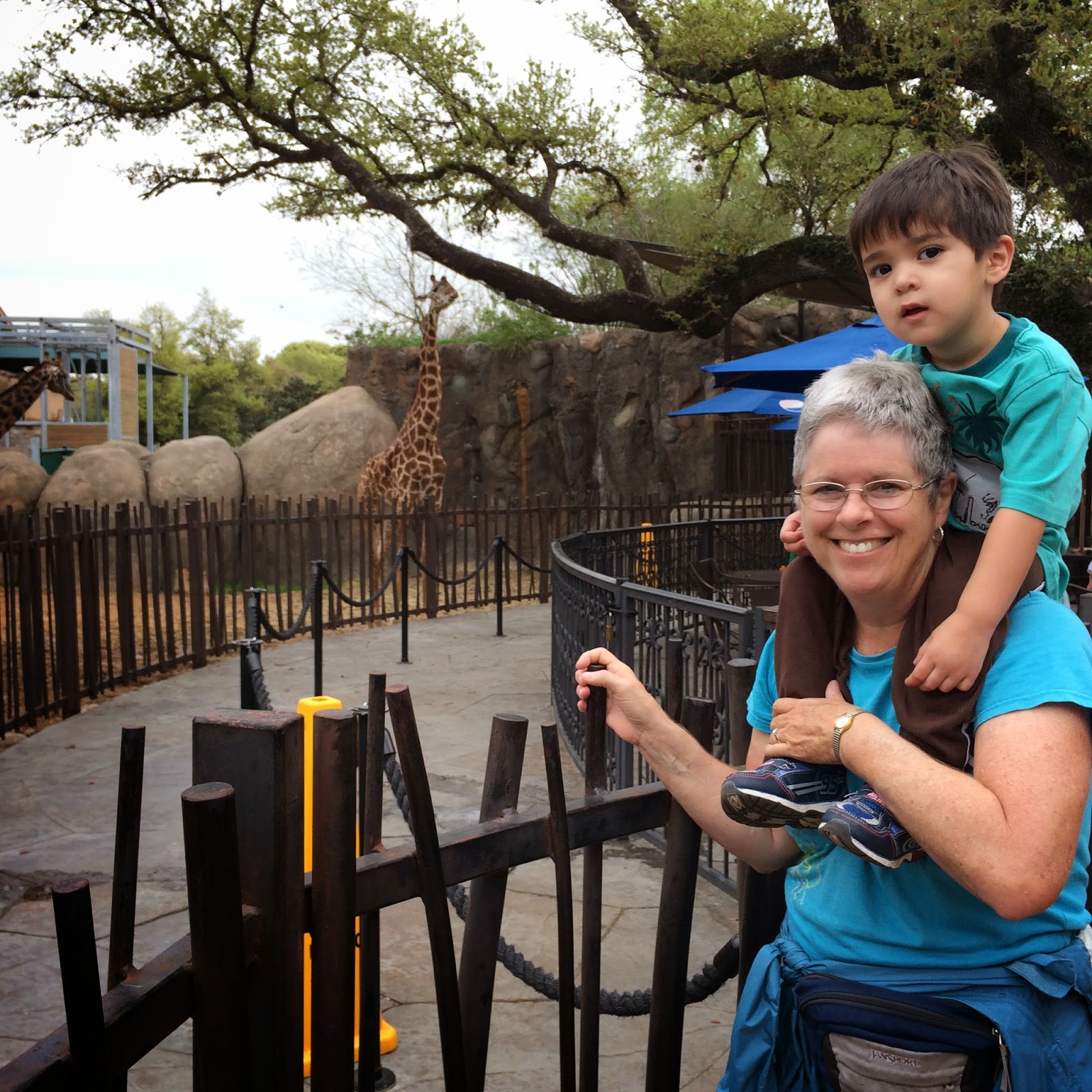 We took lots of silly selfies.... 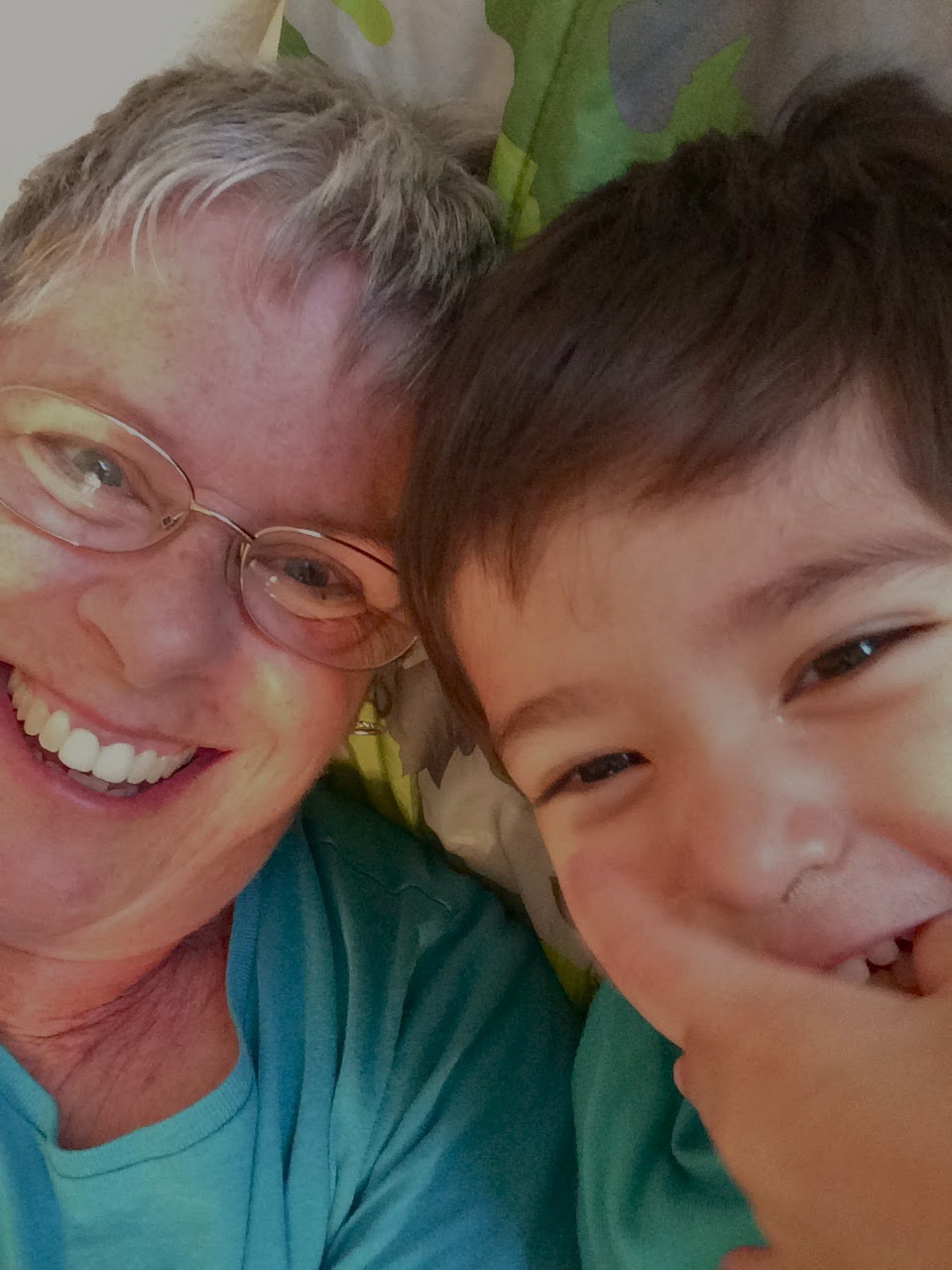 We did chalk drawings on the patio, and Barron is laughing hysterically because he came over and swiped some orange and blue chalk on Grandma's feet and Grandma gasped in horror! (wink, wink!) 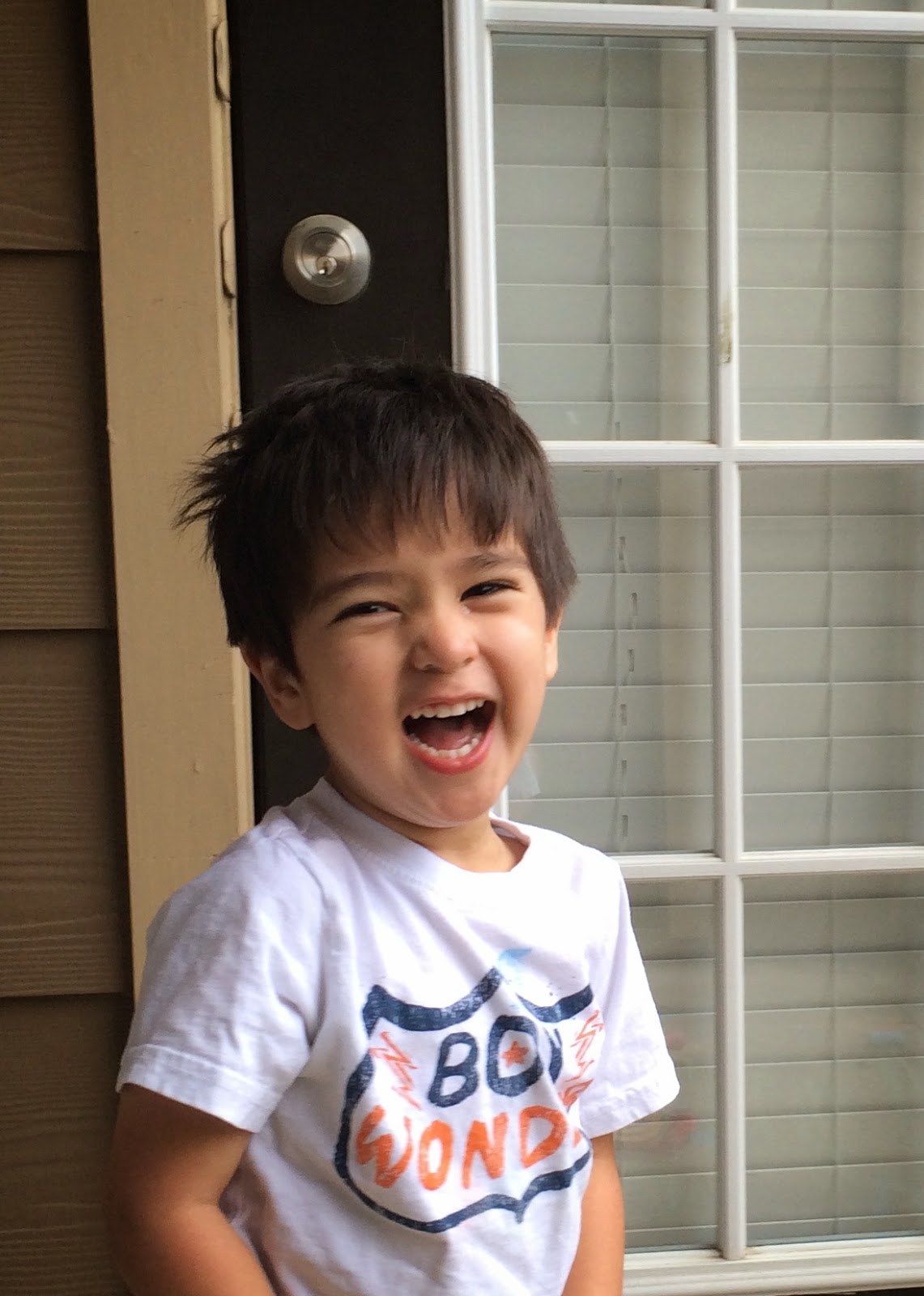 The four days were over before Sparky knew it.....Time to head home....It will be awhile before another visit, but we will stay close by internet and phone...Sparky can't wait to hear the latest Barron stories until she can go visit again....Thank you, Kerry, for a wonderful visit..... 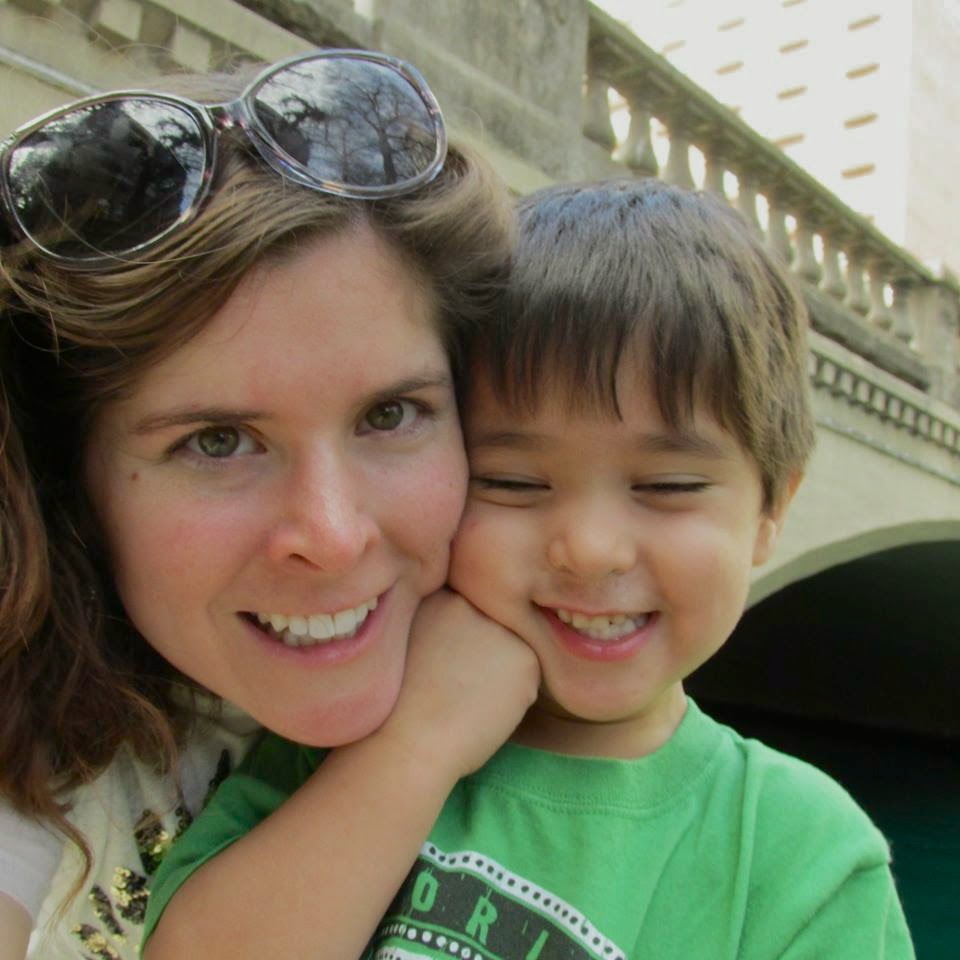 Goodnite sweet boy, Grandma had so much fun with you and loves you very  much.....Until next time... 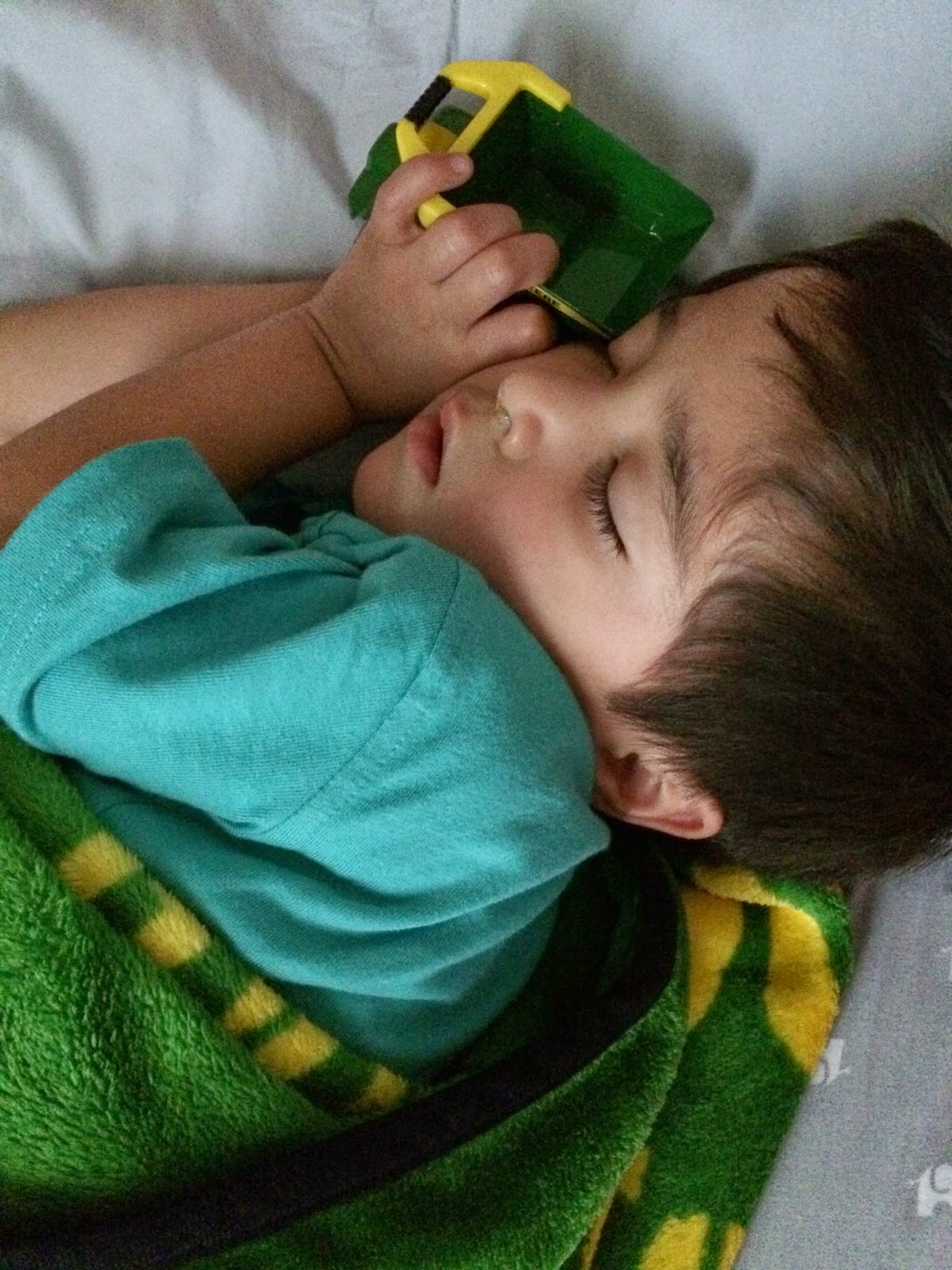 Spring Came and Went! and So Did Coke in the Morning

Well, phooey! Sparky thinks Bradenton/Sarasota had the shortest spring ever--like just a few days? We started the warming trend after a nice enjoyable winter, and BAM! Mid eighties hit and are staying! Record high today--88! Hope this is not a harbinger of the worst summer ever for heat index and humidity and not enough rain! Sparky is going on record as forecasting that kind of summer, hoping she's wrong.

Sarasota had spring break this week, so Sparky didn't sub...Eldy worked the Valspar golf tournament as a volunteer this week. He enjoys that very much although it is exhausting--on your feet a lot and hot. One of the pro golfers got mad at how he was playing and shoved a very expensive driver club  (he probably didn't have to pay for it) to one of the volunteers, and said, "HERE! You take this...Maybe you'll play with it better than I am!" Eldy said he wished it had been him. He would have LOVED to have been given a nice driver. (Like he needs another club, but hey---in all fairness, Sparky really doesn't need any more craft supplies either!)

So...what's new? Sparky was diagnosed with type II diabetes. It's not super bad, but it's definitely in the "you have type II diabetes range." She had to buy a glucose monitor and test strips and all that stuff. BUT--Sparky said to the doctor, let me work on this for three months and see if I can't get my numbers down with diet and exercise, and the doctor said ok. So, Sparky is:
1) drinking LOTS more water
2) totally giving up Coke for breakfast and all sugary drinks (you have no idea how hard THAT was, says E.)
3) trying to count carbs somewhat--no more than 35 g. for breakfast, 45 for lunch, and 45 for dinner.
4) switching to whole wheat bread for sandwiches
5) Giving up breads, eating smaller portions, using minimal amounts of diet drinks 'cuz they are not good for you, either
6) Eating more salads and veggies, using balsamic vinaigrette dressing instead of creamy dressings and making her own dressings
7) Reading the stack of books her daughter sent about diabetes, (thank you, Kelly!) meal planning, etc. etc.
8) keeping a food diary to see patterns of spikes in sugar....
9) riding her bike 4-5 times a week as opposed to 2-3 times per week
10) reading labels and trying to watch for "hidden sugars" in sauces and condiments
11) eating protein within 90 minutes of exercising
12) exploring SparkPeople website for healthy tips, exercises and recipes  (WHAT???!!! You are going to cook more??? asks a hopeful E.) Don't hold your breath, honey..but maybe.

Sparky is NOT going to eat oatmeal, quinoa, bulgur and things like that, but never say never. What she is doing now seems to be working for her.

So far, Sparky has lost 7 pounds in three weeks and the high sugar numbers are coming down. Sparky has discovered a nice protein bar from South Beach called Good to Go bars in double peanut butter flavor to appease her sweet tooth. 150 calories, 10 g. protein, 5 g. fiber, 6 g. sugar, and it doesn't affect her sugar hardly at all. It also has "ancient grains" in it-- quinoa, amaranth, hemp seeds, and other stuff. Sparky is also exploring apps for diabetes, but hasn't come up with any outstanding ones yet.

So that's the latest on this end of things...Here are a few more photos of the week from Sparky's bike riding.....A wasp hanging on for dear life in 15-20 mph winds. And yep, Sparky got a good workout on this 15 mile bike ride today in those winds! He looks like he was riding a bucking bronco! (taken with an iPhone 5S--doesn't it take great photos for a camera phone?) 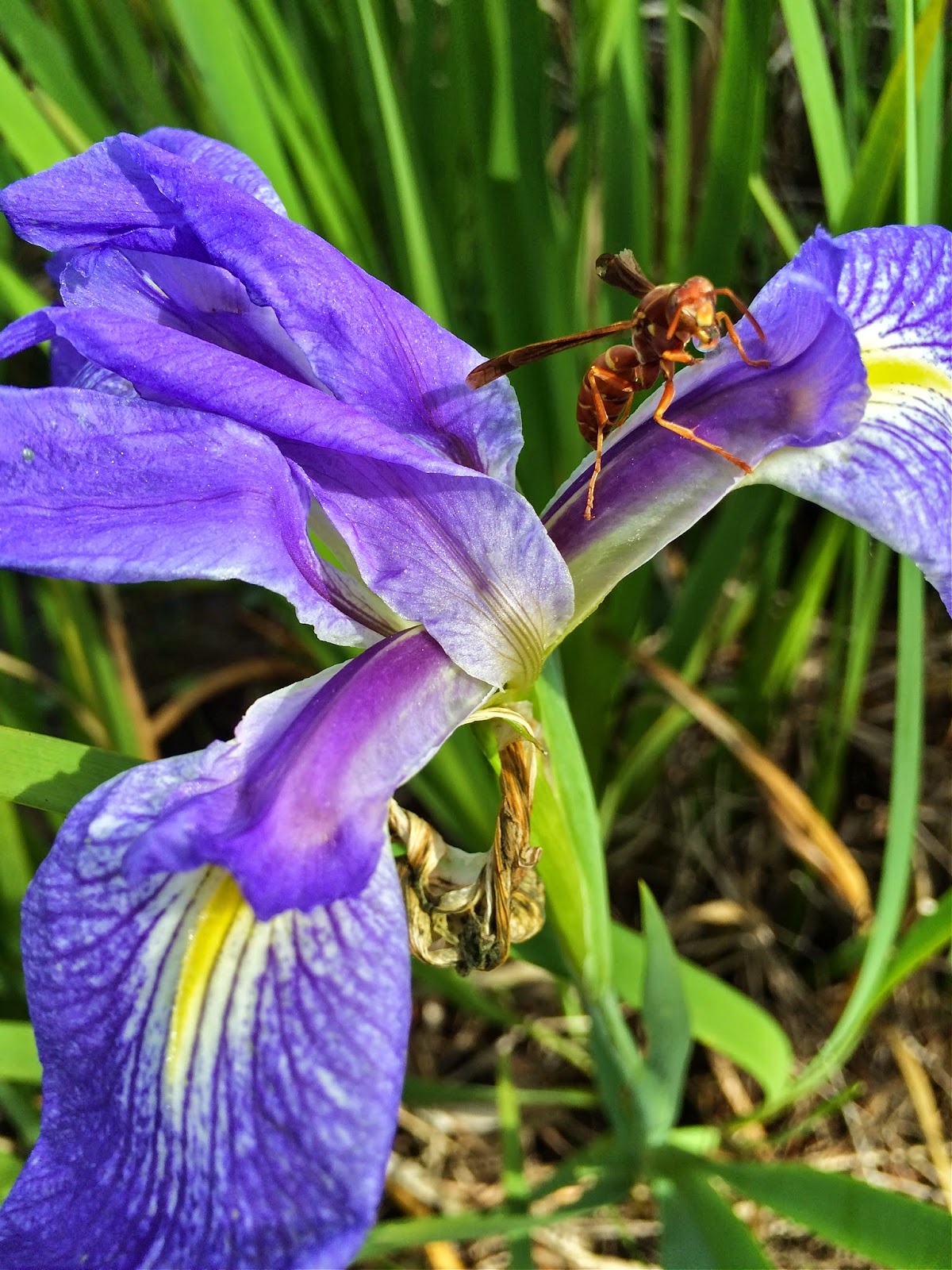 There is only one single marsh plant left blooming out of the entire side of one marsh Sparky rides by every day.... 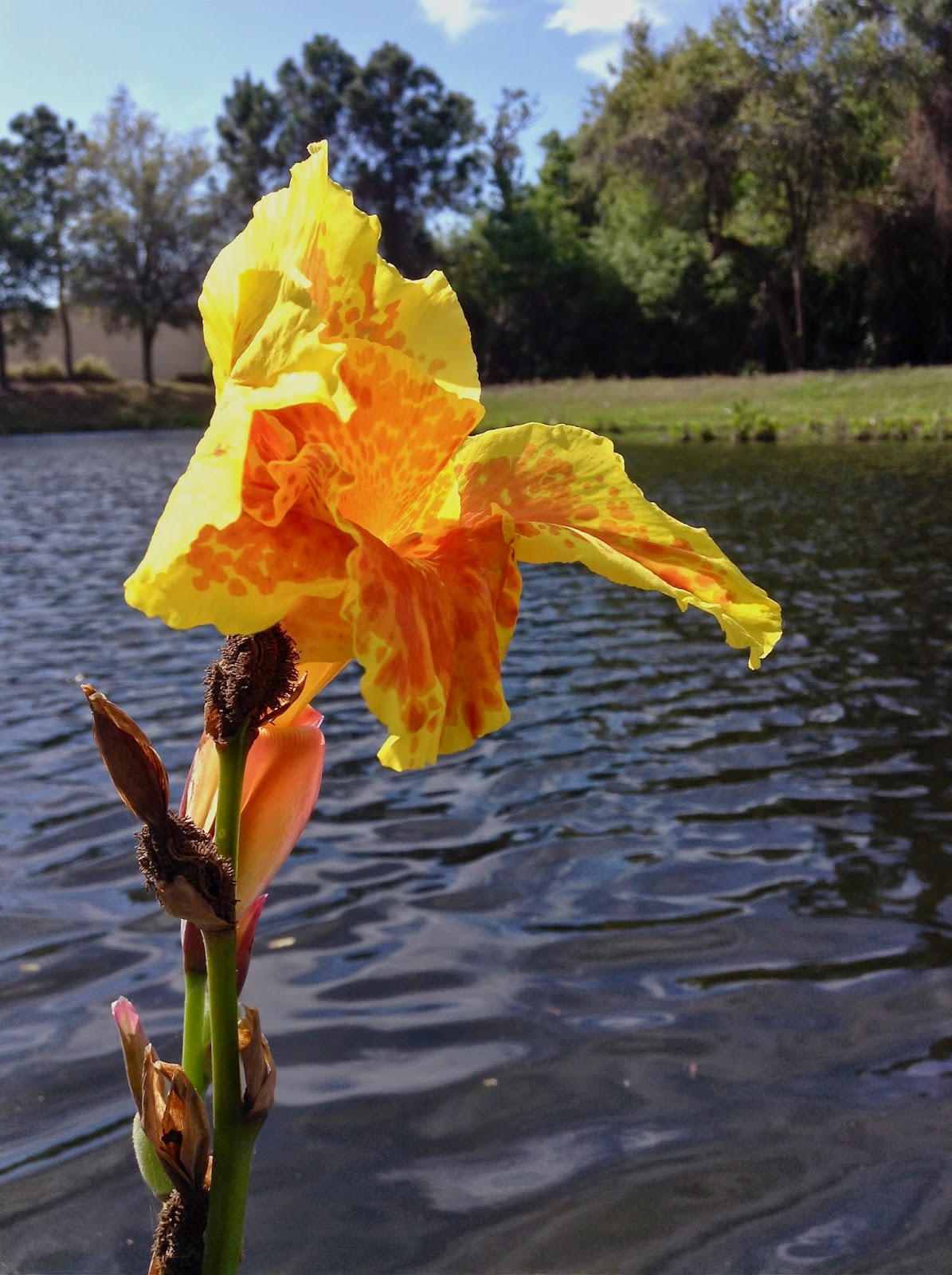 And the scenery is just wonderful...and the weather, too, although it's getting hotter..... 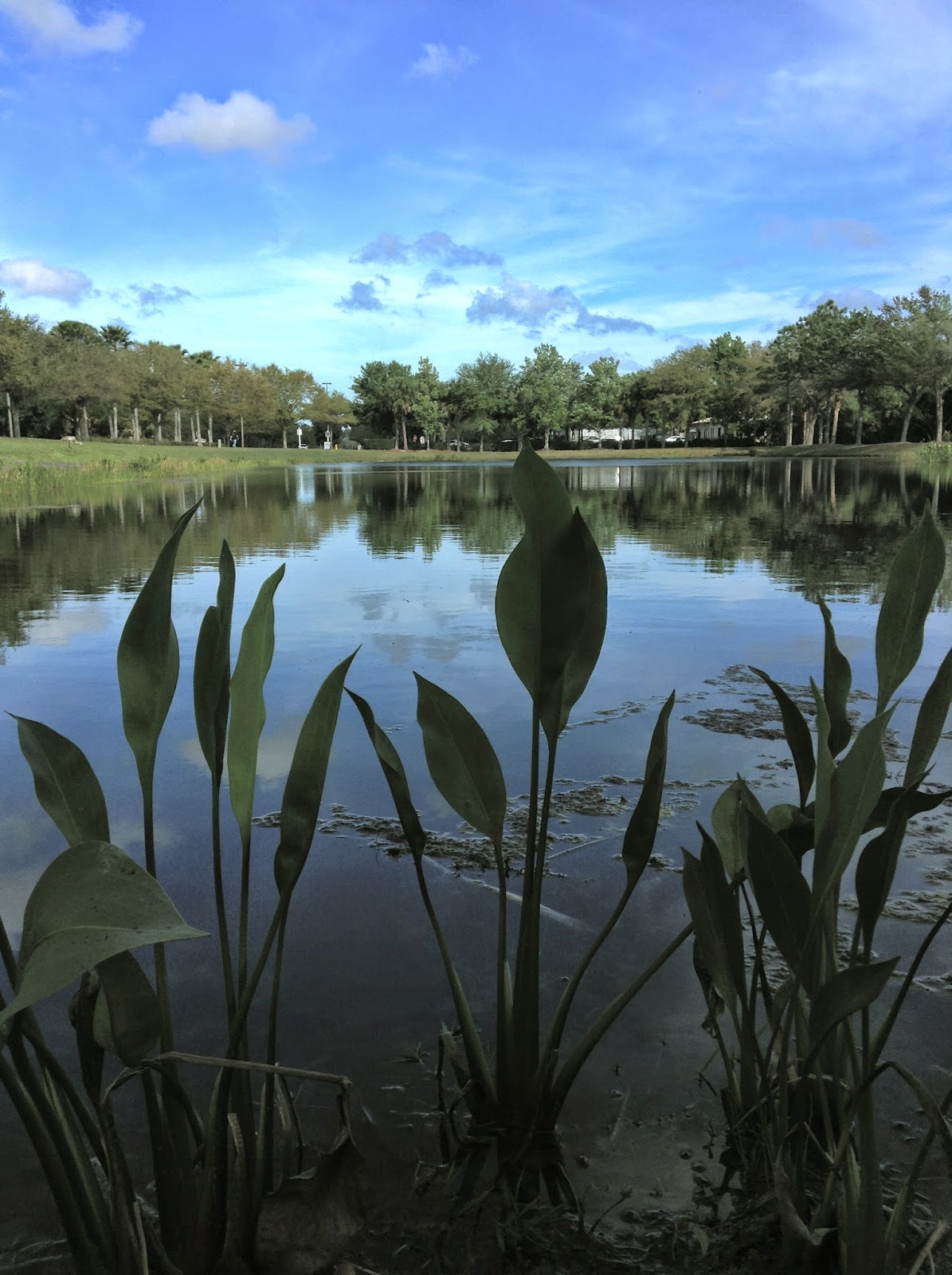 A turtle rescue! Sparky saw a big, slimy, muddy, grass covered turtle in the center of a street trying to cross. Cars were swerving trying to avoid it...So she got off her bike, and nudged the turtle along by stomping her foot behind him to get him to move along until he was off the street but stuck up against a big curb. "C'mon, big guy. Move it, move it, move it." Sparky was debating on picking him up to get him over the curb when along came a couple of runners. The guy had no hesitation in picking up the turtle and deposited him back along the OTHER side of the street by the pond's edge. Mission accomplished! A turtle saved from turtle soup, maybe. 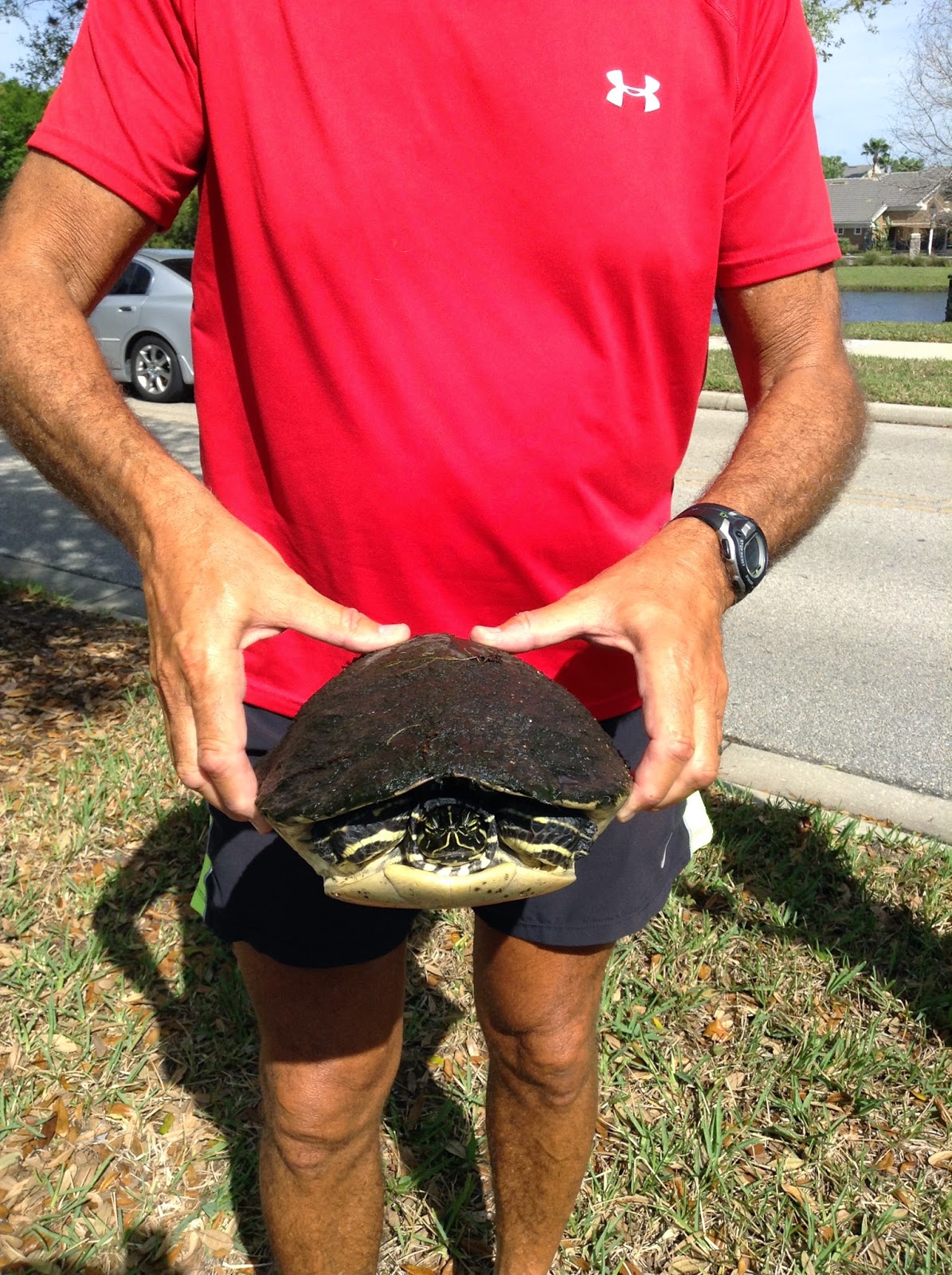 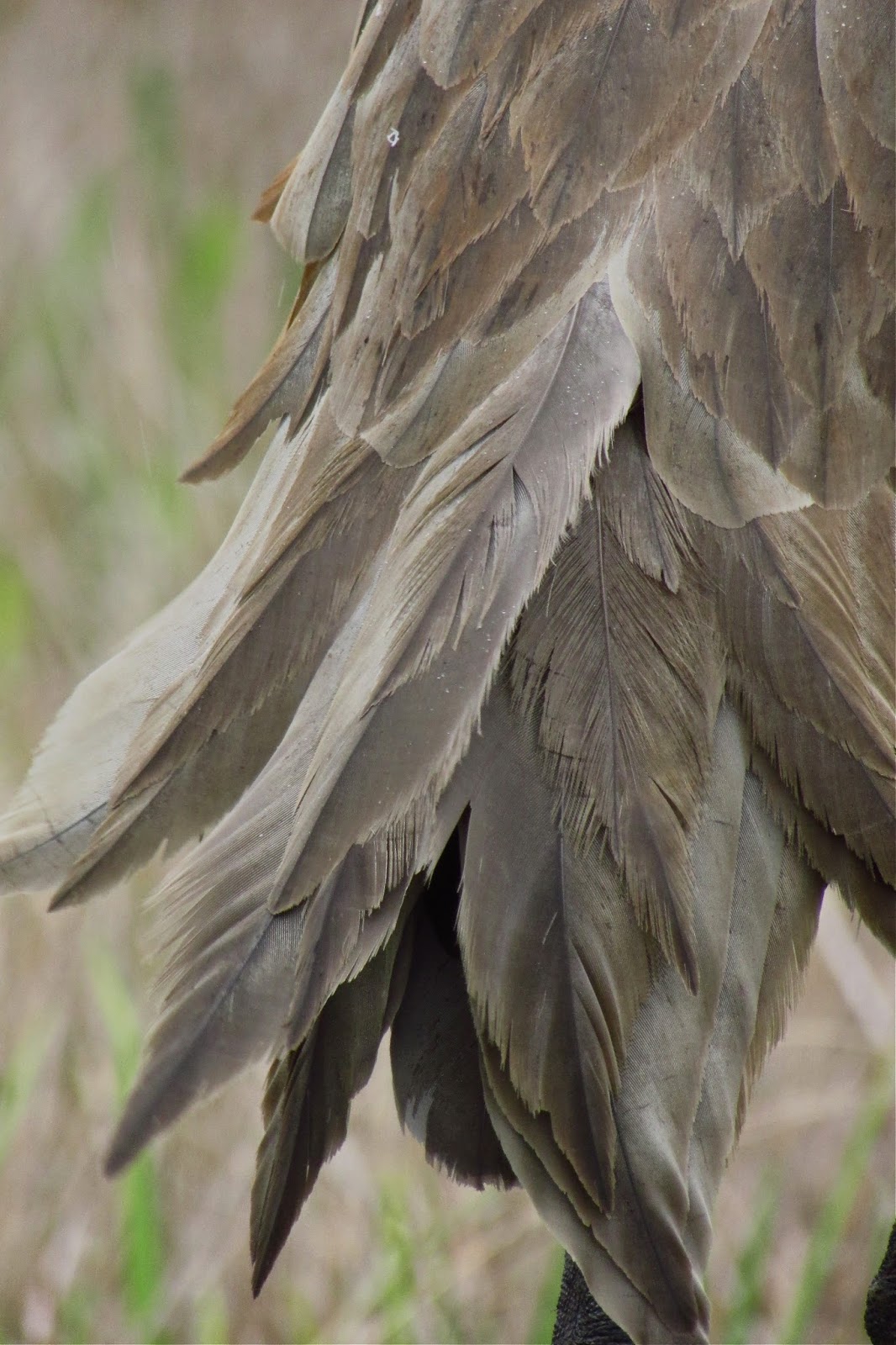 The End
Posted by Jeannie and Eldy at 8:29 PM 7 comments: 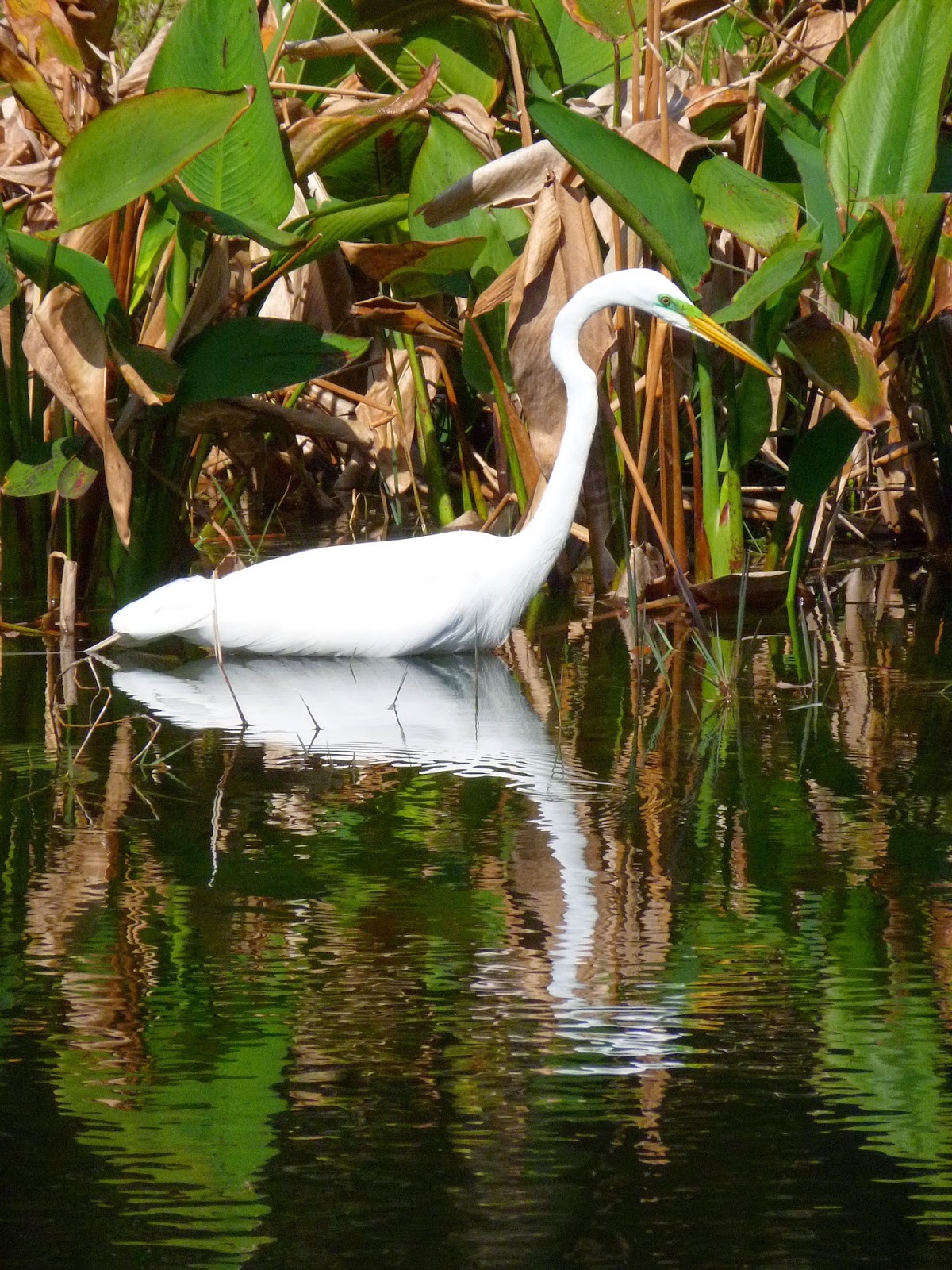 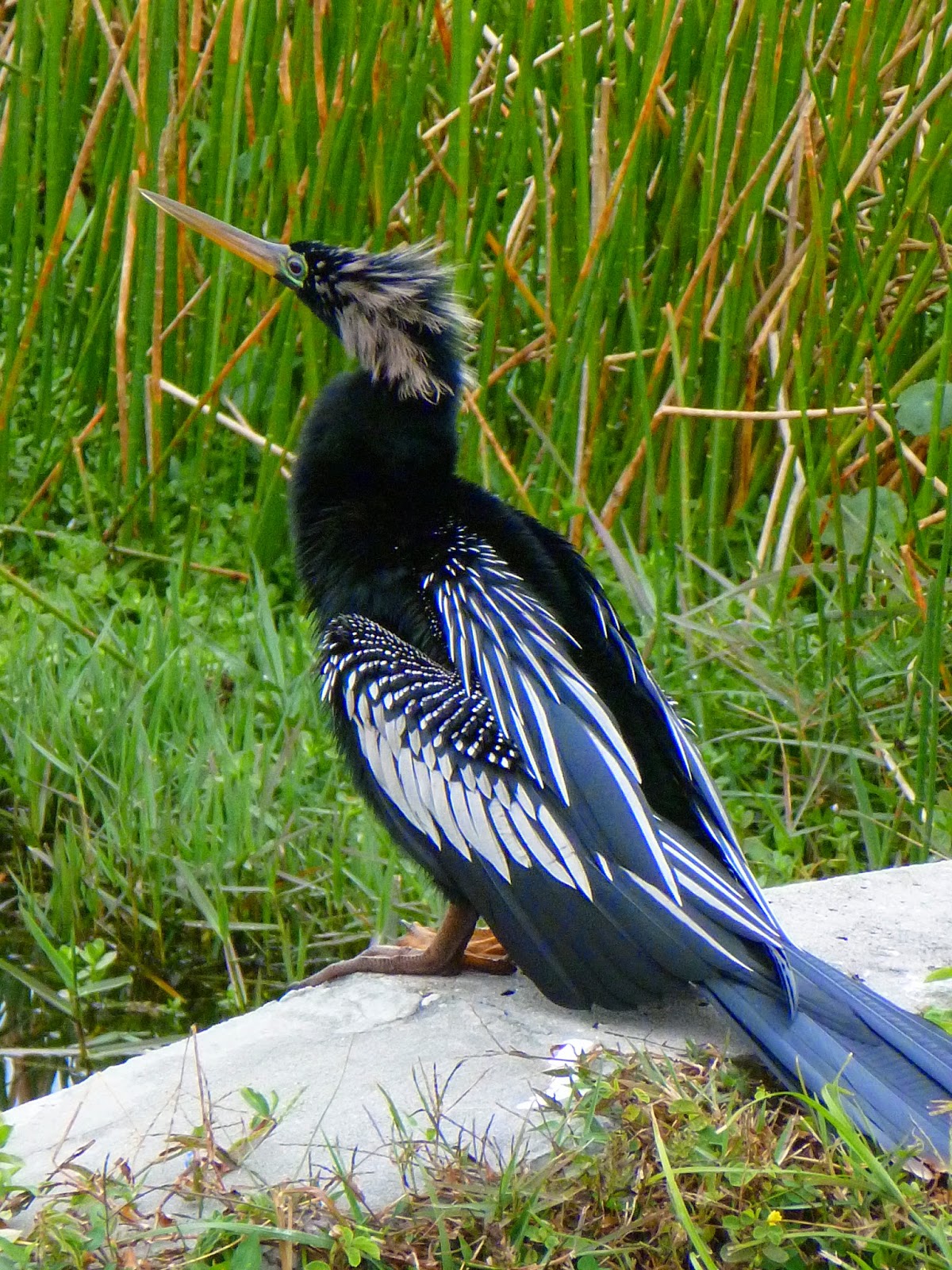 The bark pattern on a tree philodendron? They look like eyes with eyelashes..... 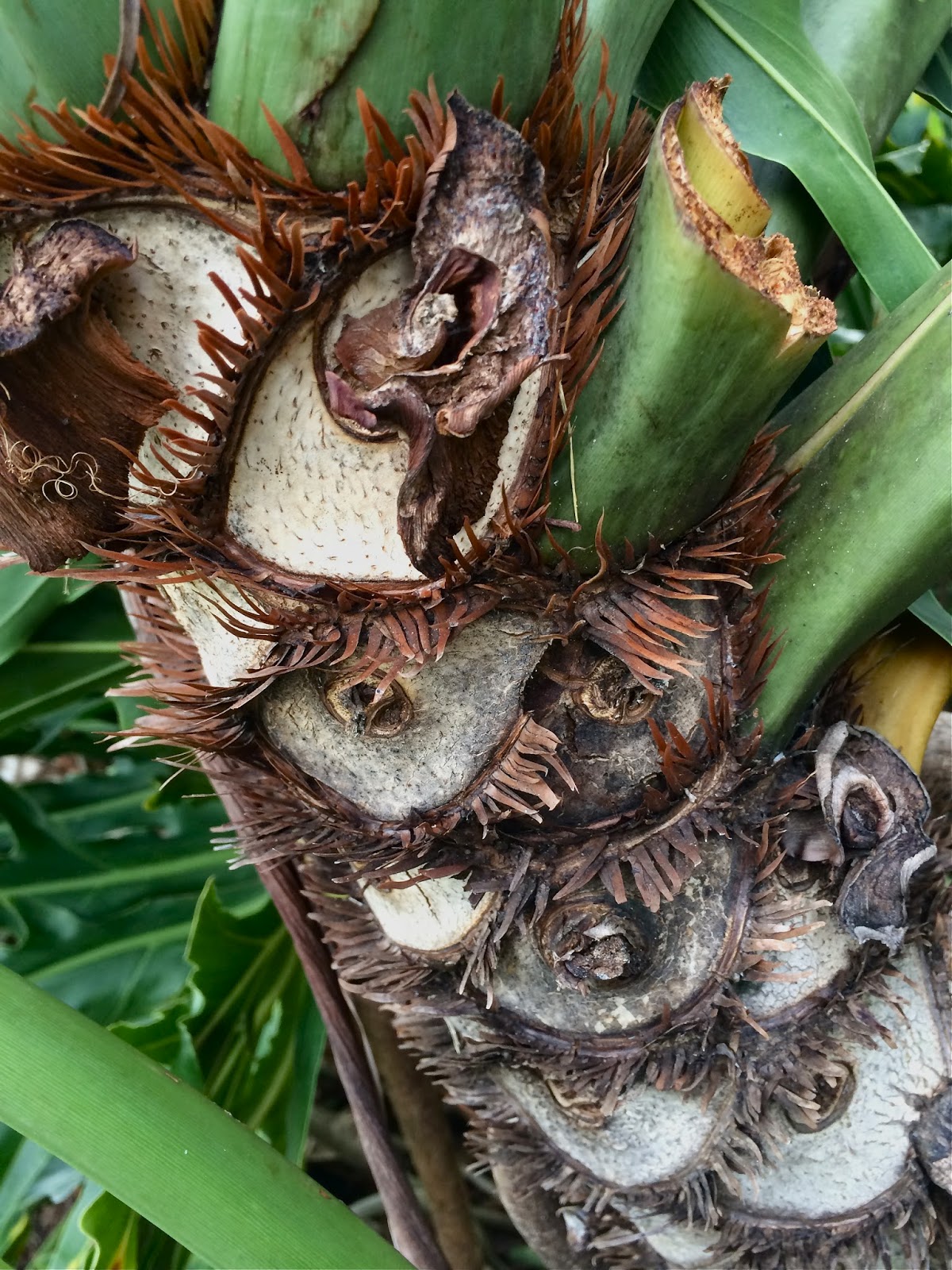 How a wood stork sits?  On the "knee" joints! With the feet in "tippy toe" position! 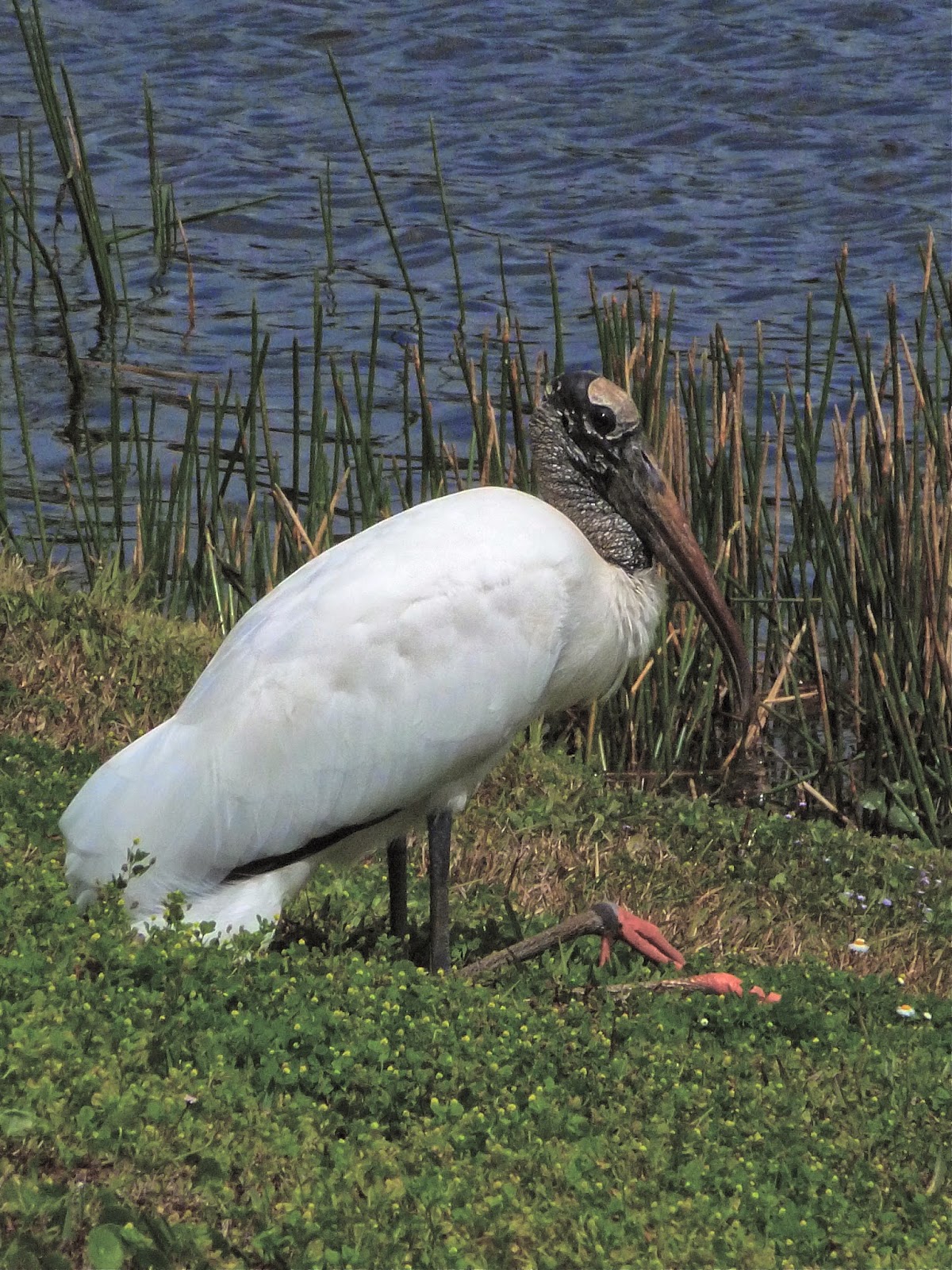 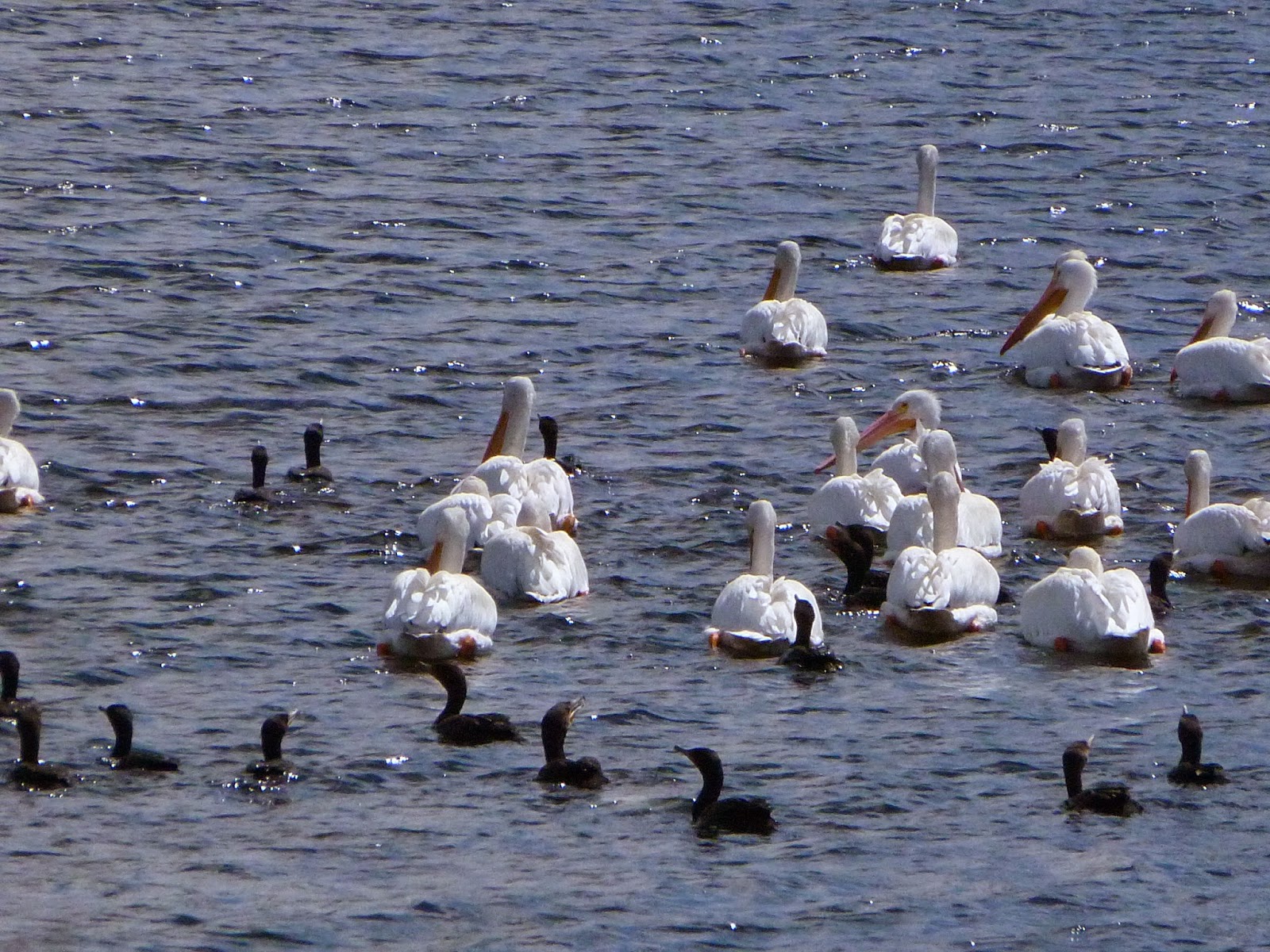 How cormorants hang out with pelicans and possibly herd fish together? Sparky saw a flock of 85 white pelicans migrating through Lakewood Ranch the other day and a flock of at least 40 cormorants hanging with them. They seemed to be fishing together. It seemed the cormorants were diving towards the bottom, pushing the fish upwards, and they were both benefitting from the fish coming to the surface. Along the shores of the pond where the pelicans were nearby fishing, were 6 Great Blue herons, and they were NOT comfortable with the crowd of pelicans there. Sparky saw one Great Blue back away as the pelicans herded fish towards the shore. The birds on shore kept a watchful distance until the pelicans moved away.

Ever noticed.....why it's so difficult it is to sneak up on turtles? Sparky can do it in a kayak, but not while walking along a sidewalk...If she takes just one or two steps towards a group of sunning turtles on a pond bank at a distance of at LEAST 100 yards or more, PLOP! PLOP! PLOP! into the water they go....Can they feel the ground vibrations? (Sparky, you DO have heavy feet some times, explains E.) Can they really see that far? But look how close Sparky can get while in the kayak.... 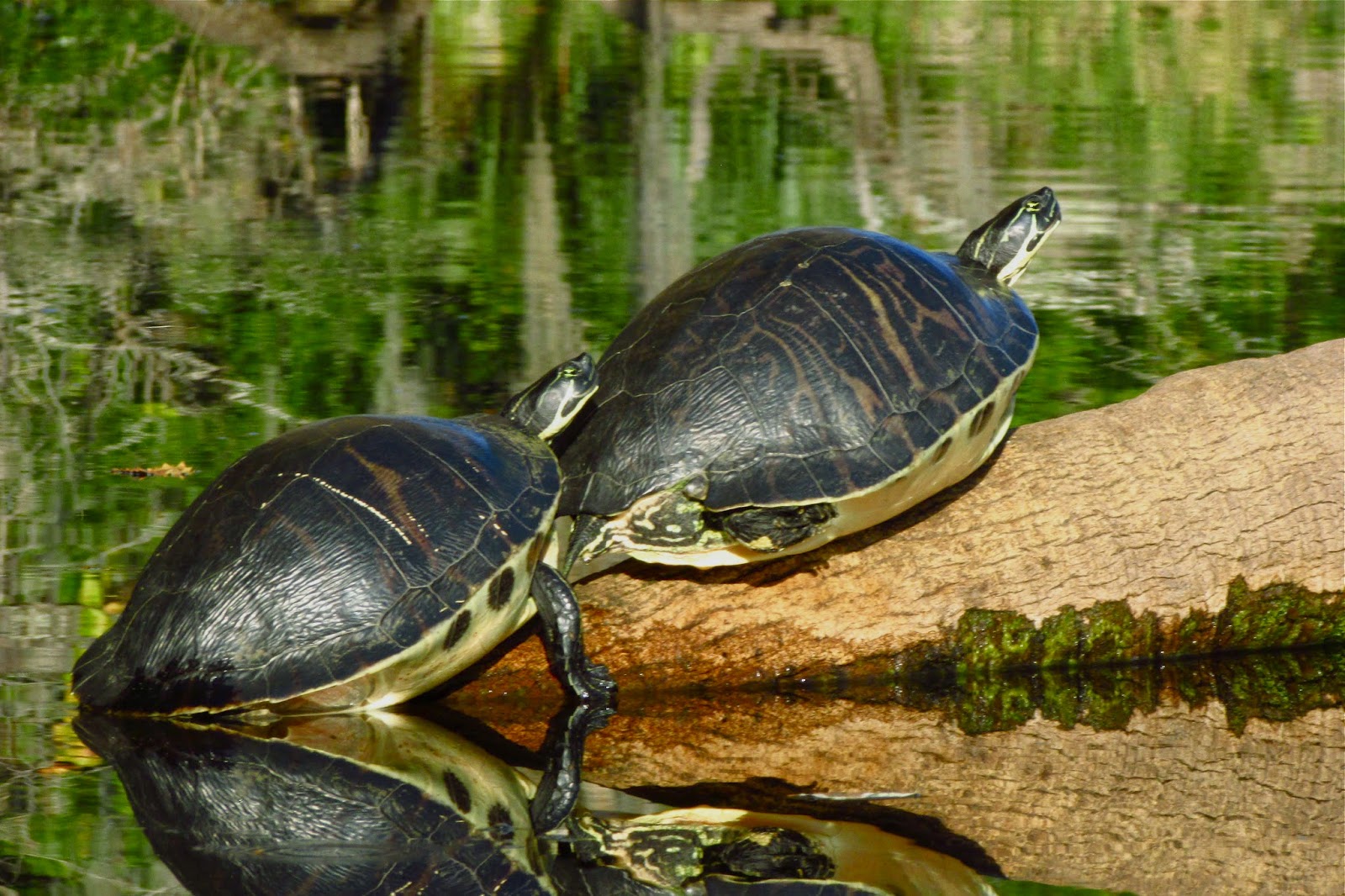 How many bees are on a bottlebrush tree when they are budding and blooming? HUNDREDS! 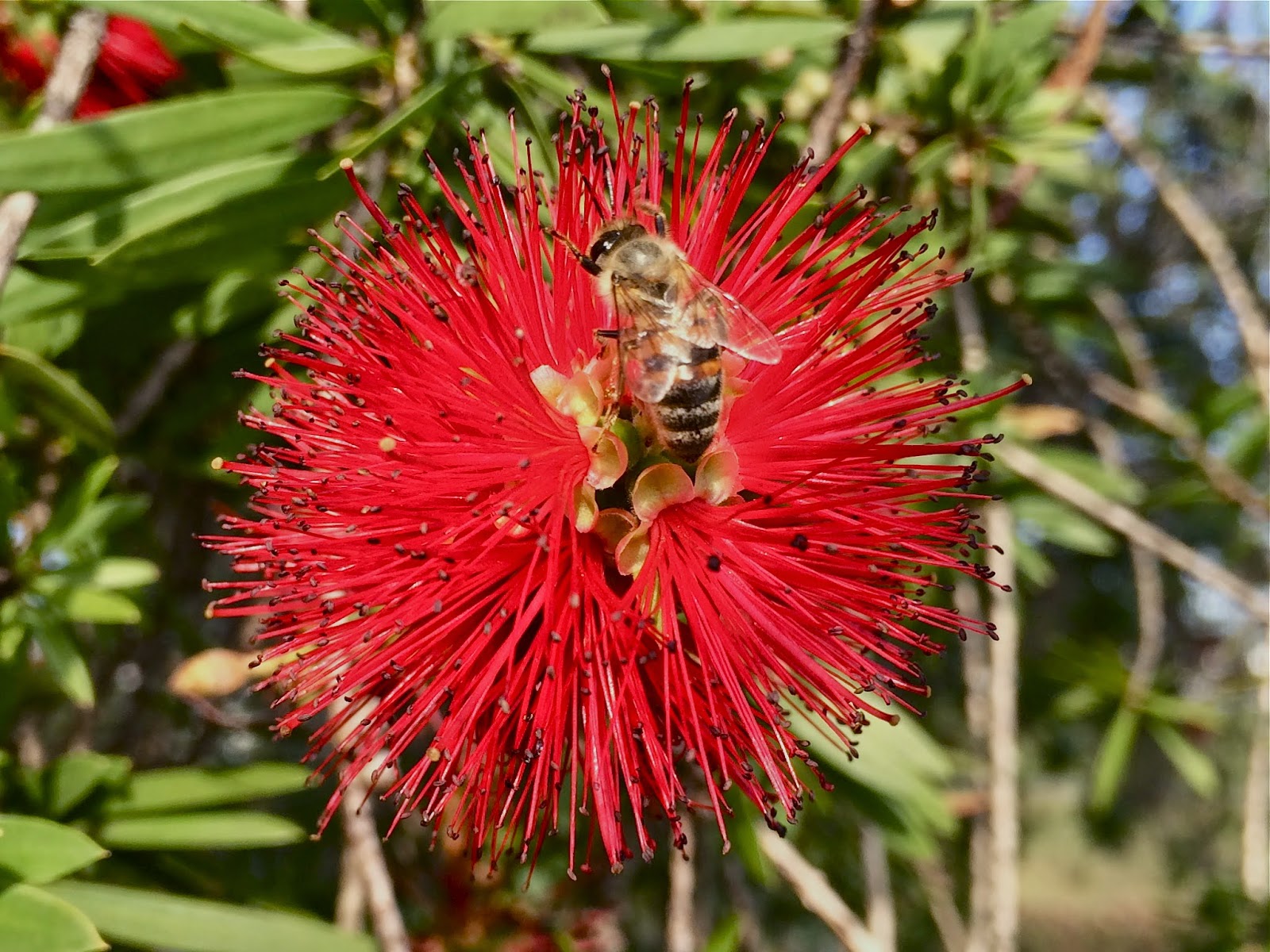 How often cranes' heads are in the upside down position as they clean their feathers? 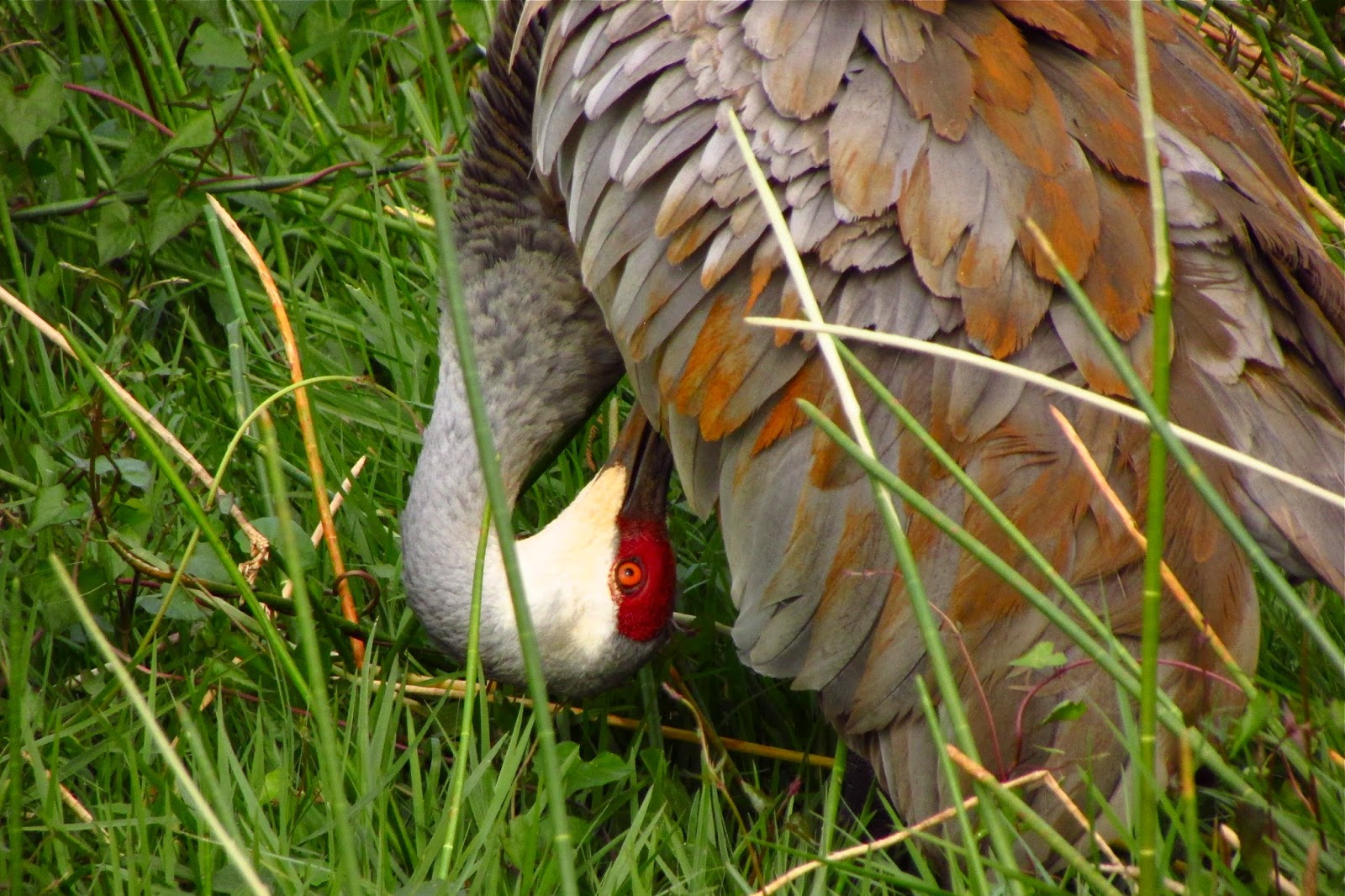 What's under your feet in some places? Sarasota has some beautiful sidewalk tile mosaics.... 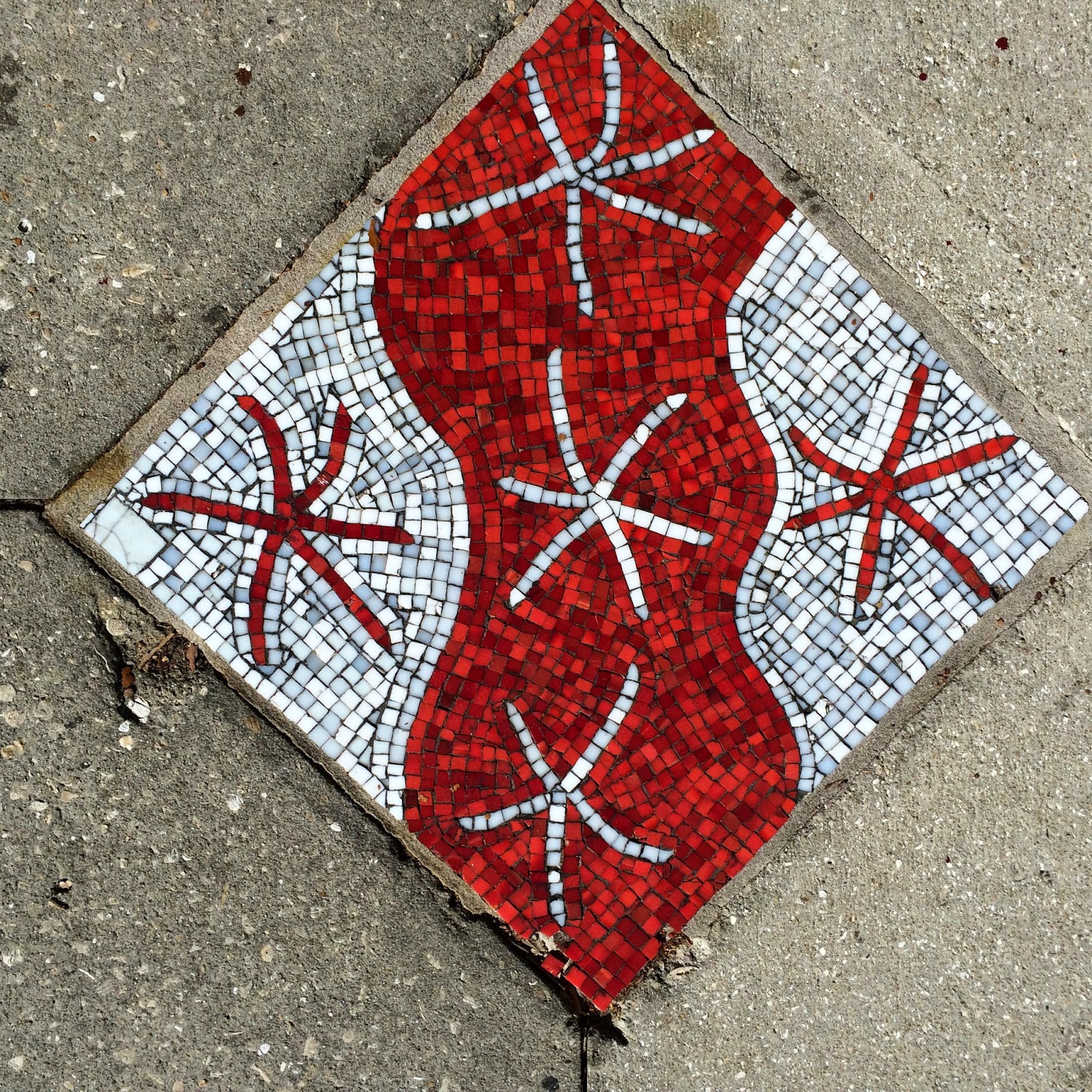 How symmetrical nature is? 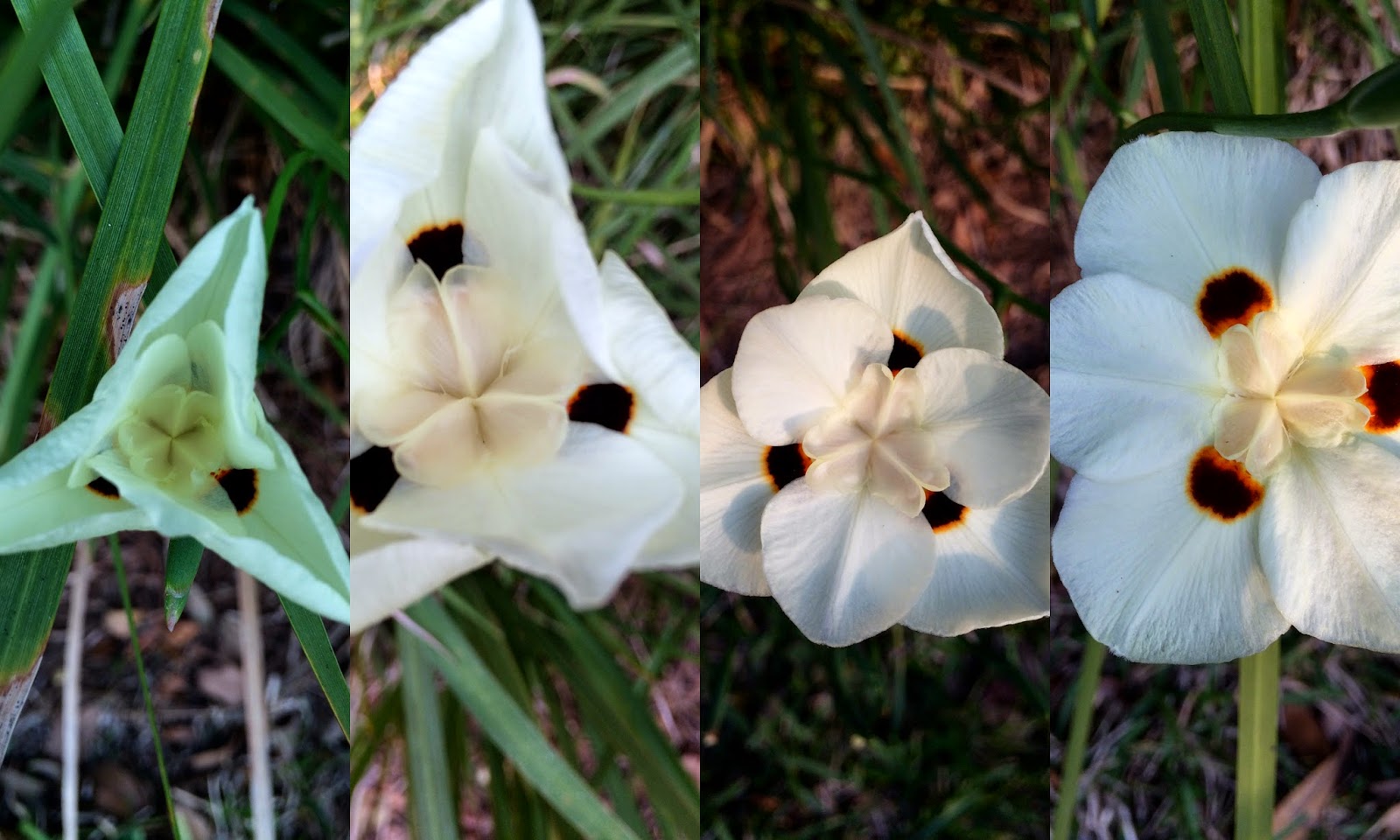