Too cold to go swimming this morning, so Sparky and Eldo headed over to Beginner Pickleball 101. Sun 'n' Fun has expert pickleball player volunteers every Thursday morning from 9:30 to 11:30 to teach anybody and everybody the rules and the fun game of pickleball. The resort has THREE indoor courts and a BUNCH of outdoor courts. The outdoor courts are lighted for nighttime play. We've had a lesson  or two already, but Sparky just cannot get the hang of the score just yet. So she wanted to get a few more pointers on where to place herself during game play, and try to practice announcing the score ahead in her head while watching a game in play. You get to play at least three times during a beginner session, and it really helps to learn the game as you watch on the sidelines while waiting for your next turn to play. The volunteers give skill pointers and strategy pointers and help you with your techniques, too. 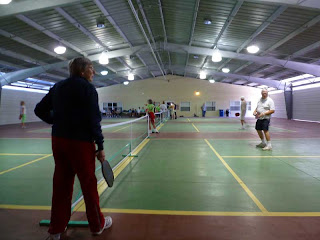 You can keep going to beginner class as long as you like till you feel comfortable and are ready for OFFICIAL court play. Eldo is ready. He's got the shots, he's got the scoring down pat, he's got the English on the ball. He just doesn't have the confidence.

We were out on the court, playing with another couple, and all of a sudden, BONK! A pickleball hit Sparky upside the head. It felt like Denozo on the TV show NCIS, when Agent Gibbs smacks him upside the head. Getting hit by a pickle ball is not like getting hit with a softball or any other kind of ball. It's a WHIFFLE ball. 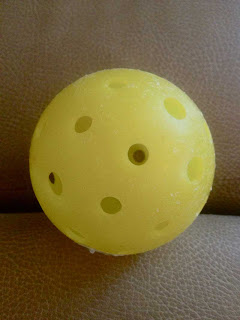 But Sparky made the most of it..Sparky hammed it up. She pretended like she was dizzy and going to faint. She got a laugh.....Thankfully, there were no jokes about some sense getting knocked into her head. (THAT would take a Bertha ball, laughs E.) In case you don't know what a Bertha ball is, it's a gigantic ball we used to play with in P.E. Kind of like a medicine ball...you know, a weighted ball used for physical fitness...(OK, Sparky, you are showing your age now, that stuff is ancient terminology! says E.)

Speaking of physical fitness, we have work to do! Eldo injured his calf muscle lunging for a ball in class today....Sparky is going to get him into a regimen of working out at the fitness center here, working on his leg muscles. (Lots of luck with THAT! says a stubborn E.) He thinks he can just go out and play hard and not have any consequences. Sparky says, "You gotta get your muscles ready, kiddo!" You can't be a weekend warrior in your sixties like you could in your thirties. Your body says, "WHOA! I don't think so!" when you lunge for a ball. And that's what happened to Eldy. A few days off, ice and stretches, later on, workout room, here we come. Or there Sparky goes...hahahaha.....

Sparky played at the women's social pickleball this afternoon. It's every Thursday from 2:00-4:00 PM. It was really, really fun. There was an experienced pickleball player who volunteers to bring paddles and balls in case you don't have your own and want to play. She's there every Thursday afternoon. Thank you, Marcia!

The ladies are really nice, there is a wide variety of skill levels and nobody is cutthroat competitive. Three games later, Sparky can hardly move!  Hot tub, here we come!  See you later.....
Posted by Jeannie and Eldy at 11:50 PM

Email ThisBlogThis!Share to TwitterShare to FacebookShare to Pinterest
Labels: exercising in your sixties, pickleball bonk on the head, pickleball volunteers at Sun 'n' Fun