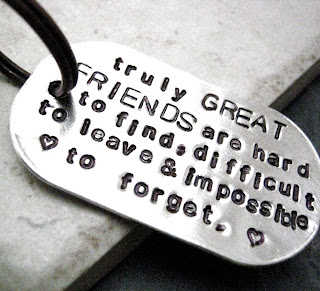 When we first started full timing, Sparky thought it might be a lonely existence, just Eldo and Sparky in this great big country of ours. She was a little concerned about leaving friends back home in Indiana or having friends to talk to while out on the road, or even a friend to do something with BESIDES her better half, Eldy...How can you make new friends when you are moving around the country all the time?

Well, it would be hard if both of you were withdrawn, shy, kept to yourself, didn't participate in community or church activities when you were home in a sticks and bricks house, or stayed inside your home most of the time. If you are outgoing, sociable and like to yak, like Sparky does, then it's not difficult to meet new people and become friends with them. In this dynamic duo, Sparky is more the yakker, and Eldo is the shy, slow to get to know guy.  BUT NOT ALWAYS. So you both don't have to be outgoing to make new friends, but if just one of you is a talker, then you won't have any problems making new friends. Even though you might move around a lot your first year full timing, because you are so excited to get out there and see the country, you still will meet people in each park that you stay. With fuel prices the way they are, we are spending more time in one spot or campground, which makes it easier to get to know people.

RVers tend to make new friends easily.  We want to get to know people and time is of the essence, because we know we or they will be moving on soon. We RVers know that even if people we meet are going to move on, chances are good that we will see them again some time. RVers are generally a  friendly, curious, helpful bunch. They watch out for each other. They see a guy bending over his grey/black tank bay, messing with something for awhile, they will tend to come on over and see if you are having a problem. Anything they can do to help? Well, maybe NOT the black tank bay, or the "wet bay" as they call it, but generally speaking, all you have to do is stand around and scratch your head and somebody will be by shortly with an opinion on what might be wrong or how to fix it.  At least, that's been our experience.

Here at Sun 'n' Fun, Sparky has met new friends through swim exercise class and biking. She met Joanie, a Michigander, on her first long distance bike ride, and a really nice couple, Annette and Paul, also on the same bike ride, who are now following us on our blog.

Snowbirds tend to travel geographically in roughly the same cycles and circuits. We want to go north in the summer, and south in the winter! Rvers strike up conversations quickly and common interests--travel, blogging, photography and nature, and where's the best place to eat in town? (that's on Sparky's top ten list of conversation starters, smiles E.) usually head up the list. We know that if we sit outside on a nice day, and Eldo starts his rockin', SOMBODY is going to stop by and say hello, or make a quick friendly comment. And from there, sometimes great friendships begin.....Sometimes you know in a heartbeat, that some people are going to be instant friends, like you've known them all your life!

Two Decembers ago, we met Nick and Ritchie Boersma at Florida Grande in Webster, FL. Ritchie came over just a few minutes after we had set up, and introduced herself. She very quickly had Sparky laughing and thinking, "What a nice, funny lady!" Soon after, we met her husband, Nick. And from there, it all went downhill....Naw, just kidding...They both turned out to be the warmest, caring, funny couple we had met since we had been out on the road. We spent over five weeks getting to know them at Webster, and then, it was time to move on...sniff, sniff....But what do you know? Some time went by, and darned if they didn't show up at another RV park in Florida where we were staying!

This year, we caught up with them at the Tampa RV show. They are staying in Clermont, FL, and were passing through the Sarasota area, so we hooked up with them again for a visit today, on Valentine's Day. 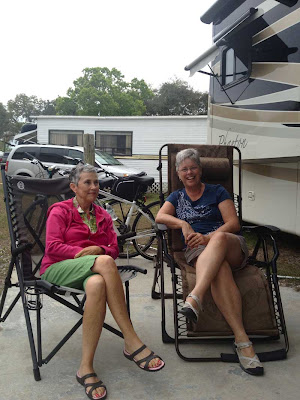 We had a great visit with them.... 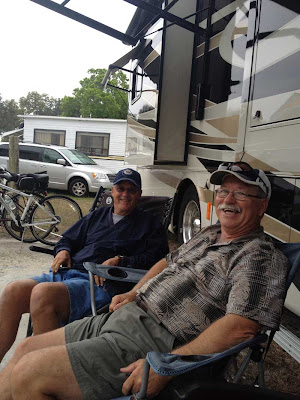 And because Ritchie is of Scottish descent, we suggested lunch at MacAllister's Restaurant, a Scottish golf themed pub/restaurant, over in Lakeland Ranch on Main Street. The food was great, the company even better! Thanks for coming over today, Ritchie and Nick. We'll be going to see them in March somewhere here in Florida.

Speaking of Valentine's Day, Sparky said, "NO CHOCOLATES!" So Eldo surprises her with a BEAUTIFUL card and these: 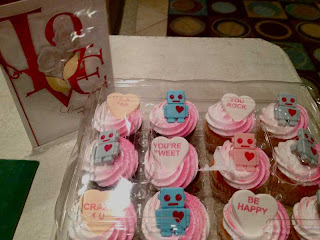 Oh, boy....Sparky is going to have to ride, ride, ride, to get rid of some of these calories! It was a terrific day with terrific friends....Happy Valentines' Day to everyone...We love our readers, we love our friends, we love and miss our families.... 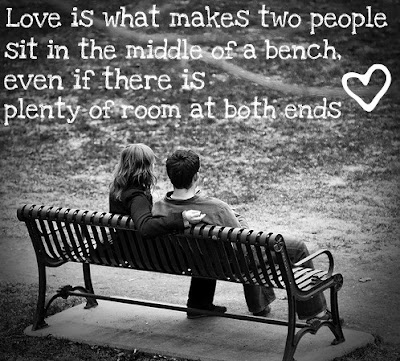