Hanging Out Everywhere in Howe, IN....

We are having great weather as far as temps go, but crummy weather as we are being followed by rain wherever we go as we head our way back to Indiana and parts south and west eventually. We decided to skip Florida this year and change our doctors and dentists to where much of Eldy's family is, in Indiana. Besides, driving all the way south to Florida just to catch up on our health needs doesn't make a lot of sense when we like to travel to the Dakotas,Texas and Arizona. It's way down to Florida, then way back up out of Florida, to be precise. Hahahahaha....So here we are....in Howe, IN, for two weeks, then Brian's house ("mooch docking" for a week), back to Howe for another two weeks, then finishing up the end of October back at Brian's house for a week. Sparky LOVES to do landscape work, like cut grass. Remember that zero turn lawn mower story awhile back? Well, she's going to give it another go here soon, if the rain will quit. (uh, oh, I better warn Brian, laughs Eldo.) If you have been reading along, you might recall Sparky's maniacal ride on the zero turn lawn mower with zero experience. Haha...

Today, one of Brian's dogs got into a skunk, or SOMETHING dead. With the adult kids having to go to work, Eldo and Sparky dog sat and

Sparky shampooed the dog, trying to get rid of the smell. There's commercial stuff you can get for skunk odor removal available at big box stores and PetSmart. What is it about skunk odor that clings and clings and clings? You can just walk around in the nearby vicinity of a skunk kill and smell like one for the next three hours!!!

We don't know if that commercial stuff works or not, but there's also a great recipe from the American Kennel Association that came up several times. Off to the grocery store to buy a quart of hydrogen peroxide, some Dawn, (good ole Dawn, that stuff is great for EVERYTHING! says Sparky, who was NOT paid for that endorsement) and baking soda. Mix a quart of hydrogen peroxide, 1/4 cup baking soda, a few teaspoons of Dawn, slather it all over the dog, wait five minutes then wash it off. It worked pretty well. Sparky now has tie dyed peroxide capri pants. (I TOLD you to watch out for Izzy shaking herself off to dry! warned Eldo.) Yes, sir, he did. It's ok, Sparky needed a pair of work/hitching up pants anyway. 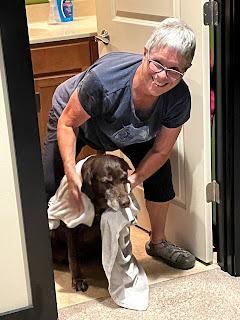 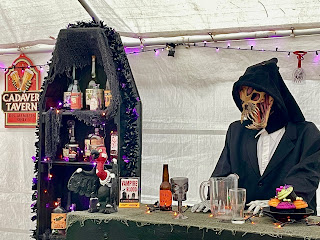 What else is going on? How about our campground in the Halloween spirit three weeks early? Every weekend starting the last weekend in September, up till the week BEFORE the 31st, which is when they close for the season, they have trick or treat on Saturday. And the campground is decorated up the wazoo for the camping families and kids who show up in droves on the weekend. They have been doing this for YEARS and it's on both sides of the campground which is split into two sections across highway 120 in Howe. Inflatables seem to be the big thing, haha. Literally. 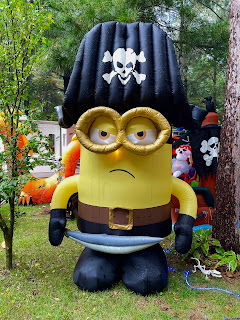 We love it. It's just for the weekend, then everybody goes home on Sunday and the campground is empty during the week. The kids' costumes are great, the decorated golf cart parade is great after trick or treat night, and everybody appreciates the talented teams that bring TRAILERS of decorations to make the campground so spooky and fun to be there. Sparky absolutely LOVES the "Bone Collector' truck that has been there the last couple of years. (Gee, it's probably because she's such a BIG Coke drinker, ya think???? laughs E.) 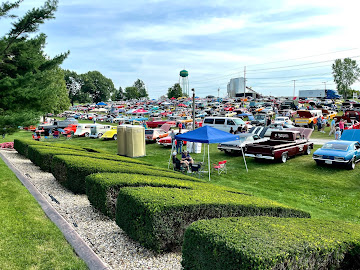 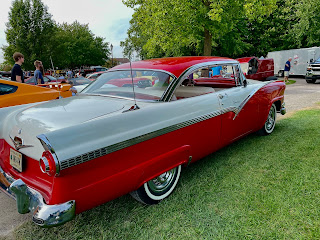 While we were at Howe the first time, we stumbled on a classic car show at the Das Essenhaus restaurant grounds. It's every Thursday from May till October, and we just happened to see the very last show of the season. There were about 2,000 cars there! All over the grounds. People start coming a couple of days ahead of time. There is no rhyme or reason to where you put your car. You show up with your beautiful classic car, you find a place on the grassy hillside to park it, and BOOM! Wait for the people to come chat and take photos of your beautiful baby. Sparky loves this one. No idea what kind it was, it was just cool! 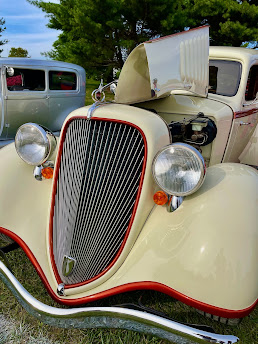 The flower quilts all over Elkhart and Goshen are winding down...You can take a quilt garden tour earlier in the summer, get a map and drive to the different locations. They are quite spectacular and at their best at the end of the summer and early fall....This one at Das Essenhaus Restaurant was still looking quite amazing! 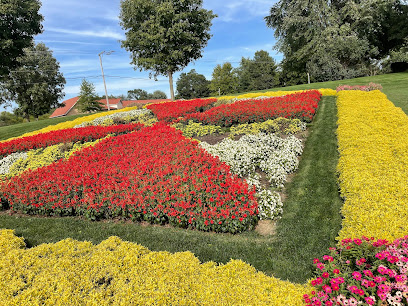 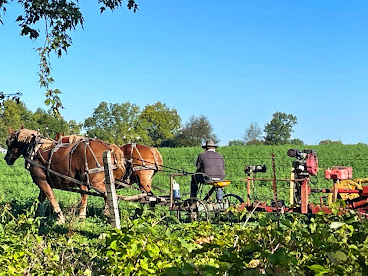 Sparky rides the Pumpkinvine Bike Trail a lot while staying at Twin Mills. She's been riding a couple of BIG rides for her....25-33 miles. That's what's great about the Pumpkinvine, you can go for short rides between Middlebury and Shipshewanna, (about 6 miles) or keep going and ride from Shipshewanna to Abshire Park in Goshen and back, and that will give you about 33 miles. She LOVES seeing the Amish out farming with their teams of horses, meeting the many Amish who bike the trail regularly going to work or to shop, and the scenery is always changing. It's fun to see the Amish kids out at recess, (there are a couple of schools along the trail) every last one of them barefoot, the girls in long dresses, the boys with suspenders, playing baseball with their teacher. It's a beautiful ride any time of year.... 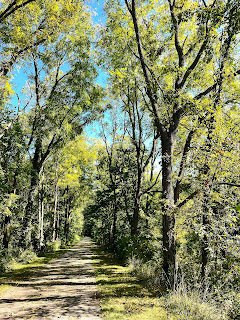 Sparky loves to shop in Shipshewanna (Eldo says: and that, my friends, is the understatement of the year...there are mysterious bags coming into the RV quite often that quickly disappear from sight when we are at Howe, IN) Gotta love Lolly's fabric store and Yoders' department store, where they have an amazing collection of shoes and fabrics. Now just to clarify things, Sparky ONLY loves to shop at: 1. craft stores, 2. good fabric/craft stores, and 3. donut shops and 4. Etsy. She hates shopping at department stores or malls. (Well, THAT'S a relief! exclaims E.)

And finally, a visit to a real genuine cider mill in Middlebury, another burg close by to where Twin Mills Campground is located. It's called Miller's Mill, and you can go watch REAL cider being made with antique cider presses while you wait to buy some AMAZING cider to take home with you. They were super busy the day we went, so we just watched for a brief time, and were not able to talk to the owner about the process. It was fascinating just the same to see a delicious product made with the old press still functioning just fine. You watch orchard owners drive up with apples in the back seat and dump them in a chute. 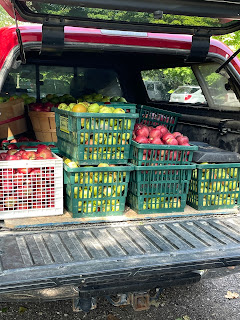 The apples get ground and smashed and the juice pours out beneath the press. 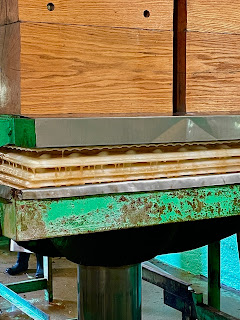 Then the apple juices are poured into jugs. Not sure what they do with the mashed apples, but that part looked delicious, too. 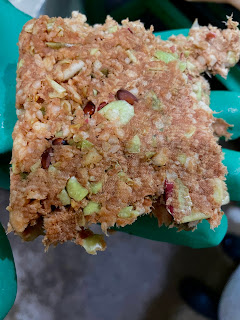 Mr. Miller had a great helper the day we went. He's learning early the value of hard work needed to run a successful family business the old fashioned way. It really was the best apple cider we have ever had! 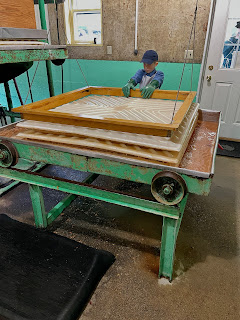 And that about covers a couple of weeks in the Howe/Shipshewanna/Middlebury area. Lots to see and do, that's for sure! This is "home base" for us, so we always enjoy seeing family and friends in the area when we come. Eldy is going to play golf with his brother soon, and we are getting doctor and dentist visits in before we head south towards Texas. Thanks for following us along on our journey! See you next time.....

PS. Sometimes Blogger does weird stuff with fonts and spacing. Sparky apologizes for that because she has tried many times to fix it in the editing and sometimes it doesn't "take". It looks fine in the editing part, but then publish it and WHOOPS! something happens....sigh....

Posted by Jeannie and Eldy at 9:09 PM No comments: