Another Sarasota Hidden Gem or Two

We were out and about today, looking around and exploring...We had a little help from Brenda Wilson of Keller and Williams Realty...She was just giving us a better idea of what individual neighborhoods are like in Sarasota, Bradenton, and Lakewood Ranch. One of the places she took us to in between house visits, was a place called Jigg's Landing. Jigg's Landing is located on the Braden River Evers Reservoir, which was formed by damming the Braden River, a tributary of the Manatee River. The lake has trophy bass and speckled perch waiting to be caught. 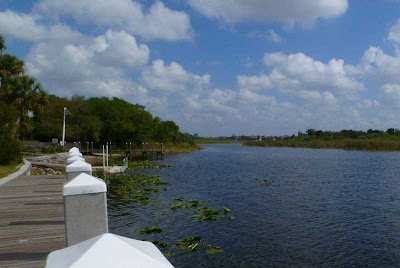 It's an old fish camp that has been renovated, preserved and upgraded into a beautiful waterfront park with cute little cabins true to the originals of 1944, a boardwalk and observation deck, an "Astro turf" type playground and a wonderful  floating "EZ dock/EZ launch" for kayaks.

Four little cabins are available for rent, and are very rustic in nature. 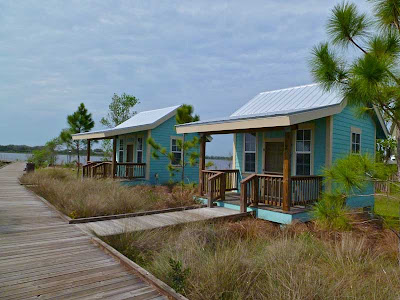 Two single beds, a nightstand, two chairs, screened windows and doors, electric ceiling fan and light. NO bathrooms or kitchen, but the restrooms and locked shower facilities are right next to the cabins.

Sparky will definitely be back here to kayak. There were tons of shorebirds and all kinds of little birds flying around. We saw an osprey and its nest close by. 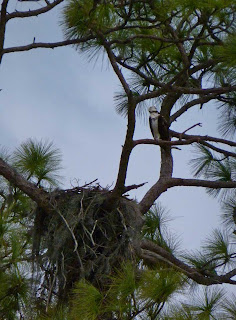 You can kayak right to the Braden River, Brenda said. It was gorgeous! 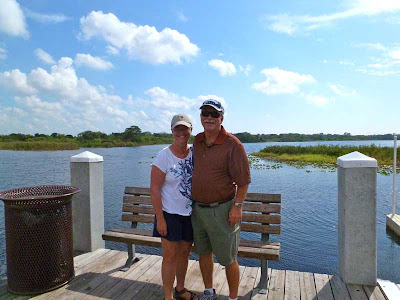 Off to see some more houses...We are getting to know the neighborhoods a lot better around Sarasota. It's fun to see the distinctive styles each neighborhood has. Late this afternoon, we knew that Steve Arvey, our go- to- acoustic/jazz/blues guitar player was playing at a unique place called Linger Lodge. 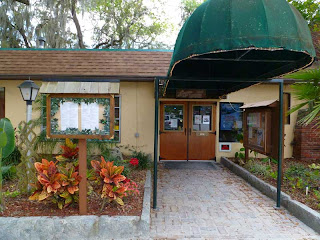 Brenda had told us about this place, how unique it was. Linger Lodge is a 1940's fishing/hunting lodge restaurant/ RV campground from the 1940's. It sits right on the Braden River. 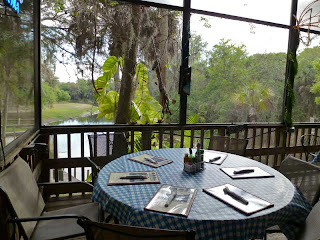 Steve Arvey, one of our favorite Sarasota blues guitarists was playing there this afternoon from 4:00-7:00. We're getting to know him his music well and love hearing him sing and play. 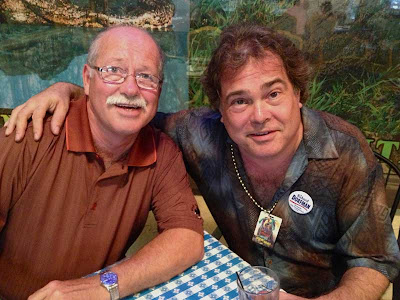 He played some wonderful low key blues/fishing songs/old folk masters songs mixed in with a lot of other stuff today. Just the perfect music for sitting in the screened in porch of Linger Lodge, called one of the "weirdest" restaurants in the country, says Al Roker, the weatherman for the Today TV show. Forbes Magazine says it's one of the "top ten most unusual" restaurants in the country. We could see why! 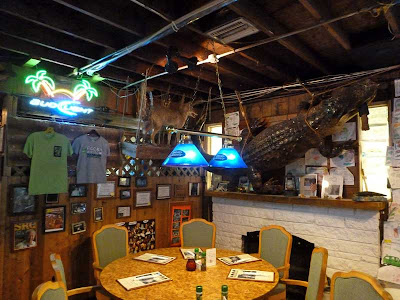 Taxidermied-if that's a word Sparky can use as a verb-- Floridian animals everywhere in glass cases, fish hanging from the ceiling all over the place and the biggest gator we've ever seen with a fake leg hanging out of its mouth. There's a story to the restaurant's beginnings and about the gator, a tall tale on the tall menu. 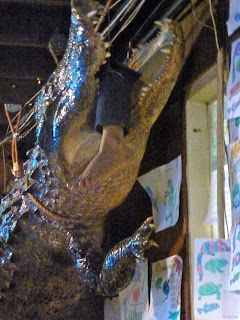 Lots and lots of hunting and fishing STUFF/wood paneling everywhere.... 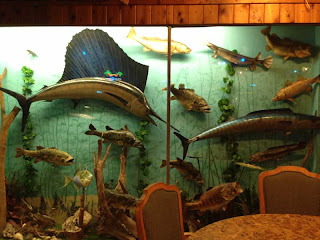 How's the food? Expensive for the size portions you get, and just average, we would say. Entertainment? Above average!  Atmosphere? Above average! It's worth a visit to see it and hear who's playing and to see the campground setting where it's located. Very reasonable prices to stay at the Linger Lodge campground, but bet it's a mosquito haven, we would guess.
Another great day spent looking around, exploring, and seeing Sarasota. Love it!