During the same trip we took to see the St. Augustine Alligator Farm and Zoological Gardens, we stopped off to see the lighthouse there. The two are almost right across the street from each other. Neither is to be missed! 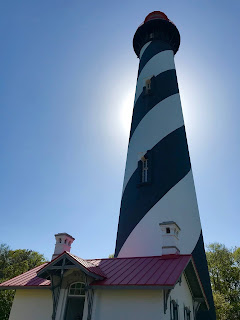 We stayed at a Sleep Inn which was right down the street from the zoological gardens, just a few minutes away from the other. The Sleep Inn was more of a budget motel, nothing too special, but it gets good ratings and the prices although over 100 dollars for the nights we were there (during the week), was one of the cheaper hotels available. It had reasonable rates and was within a very short distance of the lighthouse and the gardens. 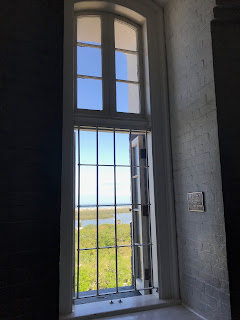 The lighthouse is beautiful....It's well kept, it's very interesting, and if you want to climb the stairs, that's 219 steps with plenty of resting spaces along the landings along the climb. There are also informational placards on the landings where as you stop and catch your breath, you can learn about the keepers, their kids, and their shenanigans. Sparky learned that one of the keeper's kids Cracker Daniels, took his sister's pet cat, Smokey, and dropped it from the top of the lighthouse WITH A PARACHUTE attached. The cat made it to the bottom, but then promptly disappeared for a few weeks. The sister didn't find out about it until 50 years later! Sparky loves to climb lighthouse stairs and wishes she could do it more often. She was feeling pretty good about having done 219 steps and not be out of breath, until she heard about the two lady retirees in their seventies, who climb the stairs TWICE A WEEK and do TEN repetitions of the stairs each time. One lady carries a Cheerios necklace and bites off one to keep track of the repetitions! 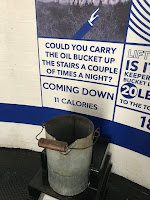 There's the usual oil bucket and-- "Can you lift it?  Imagine carrying that up and down the stairs a few times a night!" 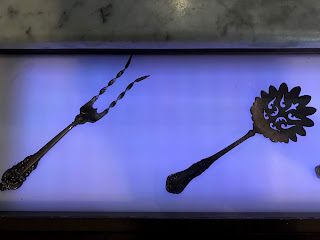 The one on the left is a baked potato fork, the one on the right is a tomato fork. They had a cool downstairs part to the lighthouse for younger children. Even the stairs going down were cool..... 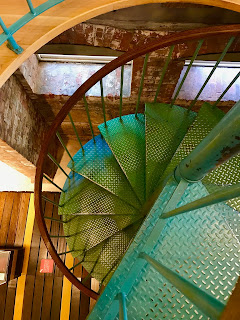 The view from the top is always great! Some people have trouble with the confines of the swirling staircase to get to the top, but so far, Sparky still likes to climb them. She just doesn't look down as much as she does up! 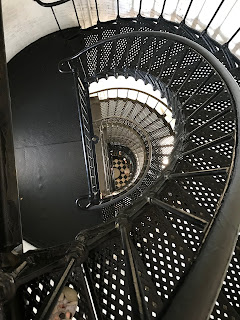 Lots of interesting facts as you make the climb to the top. Lightning strikes the lighthouse several times a year. And in the year 1886, there was an earthquake centered in Charleston, SC that shook the lighthouse violently for 40 seconds!

We enjoyed our visit so much to the lighthouse and the zoological gardens, we plan on returning in about a month to see more babies at the Zoological Gardens, a.k.a. Alligator Farm and see what's hatching. Bye for now!
Posted by Jeannie and Eldy at 2:46 PM 1 comment: