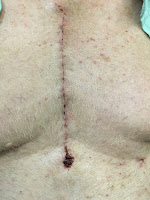 Eldy's surgery was February 3, 2016. It was relatively quick, a three hour surgery and he came home from the hospital on the morning of the fifth day after surgery. You can read about the preliminaries leading up to his hospitalization, why he had to have a bypass and his hospital experience here. To review quickly, with no previous heart troubles, an episode of pain one day and his family doctor's diligence ("We haven't seen you in awhile and think you should come in") and notice of heart disease in his family, a series of visits led Eldy to have a quadruple bypass. He had an artery stripped from his leg and his mammary artery from his chest for the quadruple bypass. He had a six inch scar incision on his chest, a little puncture wound near his right ankle, and a more major scar of about two inches further up the leg on the same right leg nearer to his knee where they took the leg artery out. He had little wounds and scabs all over his chest where he had had monitors and little electrode pads attached to his skin from the surgery. 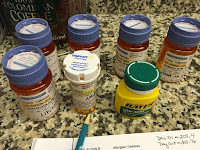 When he came home, he had a new regimen, pills and walking...The pills consisted of Lipitor, a statin, which is supposed to help lower heart related events by lowering cholesterol (preventing additional heart damage or heart attacks), Metropolol, a drug used to treat high blood pressure and angina, a pain medication called Ultram,  Lasix,  a diuretic to remove excess water from the body (which made him pee five to seven times a night, and Plavix, a drug used to inhibit blood clots, so I guess you could say a blood thinner. All these names are the common names for the medications. A baby aspirin was in the regimen as well. Not only that, but he also had to take Pepcid (over the counter) the first week he was home as he was having trouble with indigestion and belching constantly! Eldy had not been on any previous medication whatsoever prior to his experiencing some initial chest and arm pain that happened before all the events leading to the visit to a  cardiologist, except for the start of some blood pressure medication, metropolol, which his doctor started him on before the sequence of events leading to the bypass surgery. 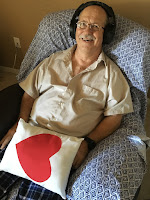 Directions for recovery at home: He was told not to push or pull on anything, that meant he couldn't use his arms to push himself up out of a chair, nor could he bend over or raise his arms, he was told not to lift anything over five pounds, ( a gallon of milk weighs EIGHT pounds!) to sleep on his back for six weeks and wedge himself into that sleeping position with the use of pillows. He decided he would make his recliner his bed of choice for the first couple of weeks. He was in quite a bit of pain the first week and a half, but the pain medication which he was able to take every six hours really helped. He had to sit in the back seat of the car with his little love heart pillow wedged between him and his seat belt if we went anywhere during a four week duration. 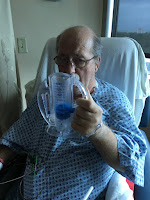 He was to use his breathing spirometer daily once an hour for a set of ten breaths to keep his lung capillaries expanded and open for one month. He did this religiously every day. Sparky was proud of him! If you don't use your breathing apparatus to open back up the lung capillaries, you could develop pneumonia. That was a big motivator for him to keep using it! Here he is using it in the hospital. Once we got home, we kept forgetting the wash the tube every night, but no harmful side effects were noticed from not remembering every night!

He had to wear his white compression sox/hose for two weeks after surgery and they had to be washed out every night. We made sure we had two pairs so we could cycle back and forth between them. He was given leg exercises to keep the fluid and blood circulation moving...ankle rotations, small leg lifts up and down while sitting in his chair, things like that. He was told to use a different washcloth for each part of the body that had an incision. He was not to use the same washcloth for his leg as for his chest as an example. Sparky went and bought two sets of microfiber washcloths at the Dollar Store for him to use so we could wash them every night and still have enough clean ones for the next day.

Eldy had to weigh himself every morning at the same time before eating or drinking. If he gained two or more pounds overnight, then that was an alarm that fluid was building in his body and we were to call the doctor right away. 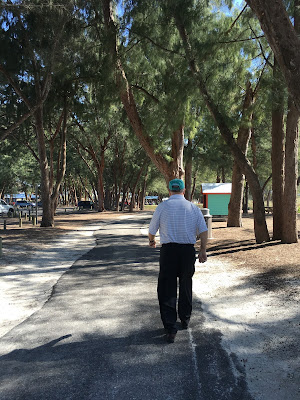 He was to start a walking routine as soon as possible. The first day was three five minute walks in the house. Each day he had to add one minute to each of the walks.  He did them in the house at first. It was kind of funny to see him walking around with his compression sox on and big ole surfer shorts that he wore to be comfortable.

Eldy did his walks faithfully, (and I'm still doing them! he reports) and this is pretty amazing. This is a man who NEVER walked in his life other than from the car to a restaurant or grocery store, or from the golf cart to where his ball lay. Eldy was a true couch potato, the only exercise he ever got since we retired from the RVing lifestyle to a permanent house was a little bit of walking on the golf course (using a cart) and to stores to and from the car. He quickly started to drop some weight from his belly and boy, is he looking a whole lot better!

How has the pain level been? Not too bad....the pain medication helped. He has been out of the hospital now for almost four weeks and he doesn't need pain medication at all. He is up to three 20 minute walks a day. His fatigue level varies from day to day. That has been the most discouraging part of the recovery process. Some days he feels terrific, then the next day he will feel like he just came home from the hospital and was run over by a semi. The least little exertion wears him out, so after a walk, he's ready for a little nap. They don't want you to take any nap longer than an hour, which was hard, because he wasn't sleeping much the first week he was home, with all the peeing going on! He has numbness in his right leg from the puncture wound to the upper leg wound where the artery came out. The doctor said that's normal and some people never regain feeling in that area, because to get the artery out, they have to strip it away from the skin, and the nerves are really affected by the procedure. He says the numbness might be improving little by little, but he can live with that, if that's the worst of the leftovers from surgery. He is still having some trouble sleeping, some nights are good, and some nights are bad. Now that he's not on the diuretic any more, he doesn't have to get up to pee!

Things we were told to watch for after surgery, to call the doctor to report:

1. Shortness of breath--that worsens or is new...some shortness of breath after exertion is to be expected
2. Signs of infection--temperature more than 101 degrees, redness, pain at the site of the incision, draining
3. Palpitations, skipped beats or racing heart
4. Dizziness, nausea or vomiting, excessive sweating
5. Clicking or popping sound or feeling in the chest, (that would be the wires moving or pulling apart) or drainage from the chest wound
6. Increased swelling in the ankles or feet, pain or swelling in the calf of either leg
7. Black, tarry stools, nosebleeds, bleeding gums, blood in urine or abnormal bruising

And of course the more major stuff to call 911...severe chest pain, arm, jaw pain, severe shortness of breath, loss of consciousness or near loss of consciousness, sudden numbness in the face, arm, or leg, especially on one side of the body. Sudden confusion, trouble speaking, trouble seeing, speaking or understanding, and/or sudden severe headache (stroke signs).

Thankfully, none of these happened...We were blessed in that Medicare covers some home health visits for the first couple of weeks home. A  nurse came every day for a little over a week, then twice a week for the next two weeks. We were able to ask questions and the care was excellent!

We are happy to report that he is recovering beautifully at this point. He had his four week checkup and in a couple of weeks, he can resume normal activities. He is able to drive now....The window for resuming driving and normal activity will vary from person to person, but the best window is four weeks, and for more severely involved patients, six to twelve weeks. The doctor said that even after resuming normal activities, his chest is still going to feel "weird" for up to a year. Eldy will say now and then that his chest feels like it's dropping to the floor when he walks. Guess gravity becomes a bigger factor and a reality after having open heart surgery! He gets tired really really easy, so he takes mini naps now and then during the day. His appetite is good. Surprisingly, the doctor said very little about diet, but we already know to watch the salt, portion control (no more three brats at one sitting, Mr. Eldo!) and fats.

Thanks again to all who wrote and sent lovely comments and shared their experiences, and we especially loved it when people wrote and said they were readers and commented for the first time. Wonderful to hear from all of you...God bless you and safe travels.... 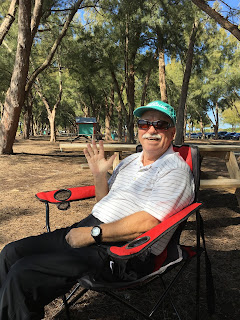 Eldo and Sparky, a.k.a, Eldy and Jeannie