Got up this morning and there's a TORNADO watch for Sarasota. You're kidding me, right?  Nope! That same bad boy storm that hit Texas with snow is coming our way. But the worst of it is to the north of Sarasota, so we'll probably just get a ton of rain. Which is good, because they sure need it here....In the three months we've been here, it has hardly rained at all. Eldy is supposed to go see a baseball game today with Vic, of Travelin' in the Big EZ, but hopefully, the storms will pass through before the ball game starts.

Photos today are from Sparky's iphone. She REALLY needs to start carrying the SLR everywhere. No clue how to adjust the reddish tinges on the color photos from her little point and shoot. Tried the white balance settings and none available for that particular club lighting with the halogen bulbs. Tried filters, tried compensating for the color cast, but nothing worked. So we have a little mix of black and white and color photos today..... 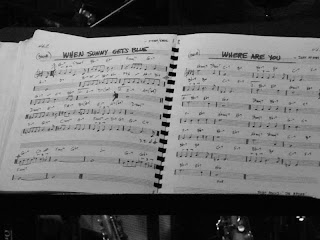 Last night was Jazz Jam night at Ocean Blues, and once again, the place rocked with some of the best jazz players in Sarasota. Steve Arvey, Shane Chalke, and special guest Koko Ray were there along with some other top notch folks but we didn't catch their names. Picture a cozy supper club, an attentive friendly, funny bartender, the lights dialed down low, lots of wood, long bar tables to be able to sit and watch the musicians up front and a bottle of Miles Davis Bitches' Brew. The label is an actual Miles Davis album considered to be one of the most revolutionary jazz albums of its time. It wasn't ours, Shane had it brought out so we had fun trying to take artistic photos of it. :-) Where's that big ole honkin' SLR when you need it!? 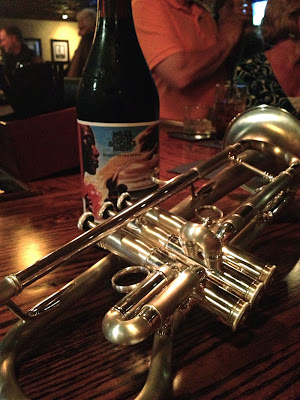 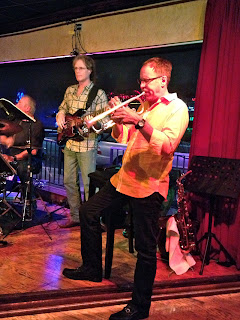 Sparky and Eldy are starting to get to know some of the regular musicians, and really enjoying talking to them about their music and their careers. Eldy talked to the drummer, Brian, for quite a while. Brian, the drummer, used to play with Tom Rush, a well known folk singer. He talked to Shane Chalke, the trumpeter, about his buffing career at Blessings in Elkhart. Shane had a BEAUTIFUL silver trumpet with beautiful engravings on it, that was specially made for him in Oregon. Shane has been playing for 45 years. Sparky guessed he started about the age of 10. Yes, he did...He was fantastic! 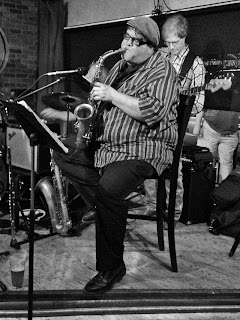 Koko Ray, rocked the house with his saxophone and flute playing skills. A couple of times during the night, he played TWO saxophones at the same time! WOW! Koko was a big dude with a big sound, and did he make that sax sing! He reminded Sparky of the beatnik generation.....Remember them?

Boy, the trombone player was rockin' with his playing--that big slide moving up and down and all around, he really got into it, body and all! 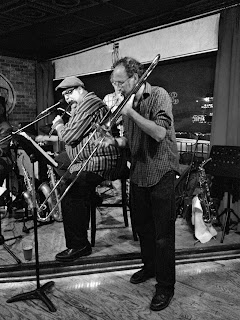 We love Jazz Jam Mondays at Ocean Blues....Sarasota is rated very highly for its jazz venues, considering its size population. No shortage of talent here!  We'll be back to Ocean Blues again, that's for sure! On Saturday nights, they have Oceans 11, a band of 11 jazz musicians. We'll be checking them out...stay tuned...heh, heheh.....