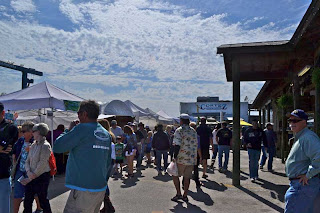 Wanna see some "old Florida"?  One of the very remaining truly old Florida fishing villages? Cortez Village, FL is hosting the 31st annual commercial fishing festival this weekend, the Cortez Commercial Fishing Festival. The village of Cortez is located on the northern edge of Sarasota Bay and is a little over an hour's drive from Sarasota.

It's a tiny little town, population about 4200 people, and about 11 blocks long. It's a gorgeous village with lots of history behind it. There's even a maritime museum right there at the village in the heart of the festival. The houses are small cottages with commercial boats and fishing gear in the yards. A couple blocks down is a number of fish houses where local fisherman sell their catches. 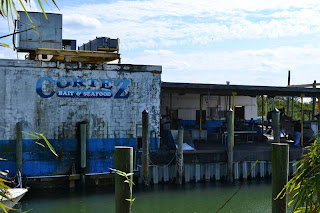 The serious fishermen who live in the village have the true workingman's spirit...They appreciate the simpler things in life. We didn't get to see much of the village today as the commercial fishing festival--"Better Fish to Fry" took over the town today and will again tomorrow. Not quite sure what the significance of the slogan is, but maybe they are trying to tell the festival goers that here is where the better fish is fried!? Not that anybody has better things to do than go to a seafood/fishing festival, right? The festival's proceeds (3.00 to get in) go to restoring and preserving wetlands and uplands just east of Cortez Village. Now THAT'S a great cause!

There was great live music today...The maritime museum is there, but we didn't visit it today.... 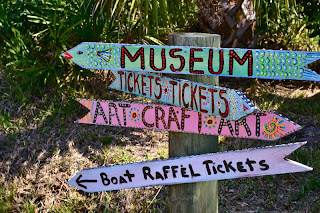 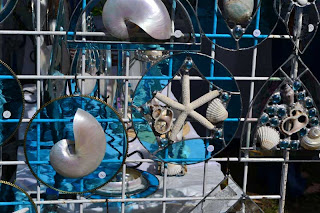 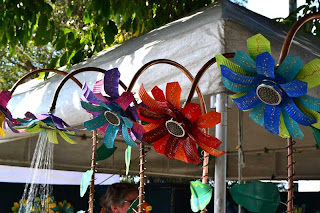 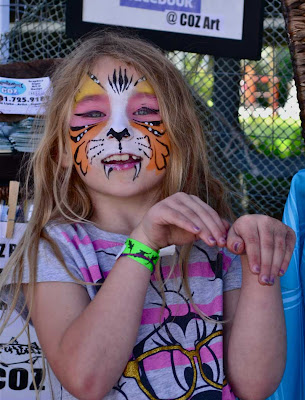 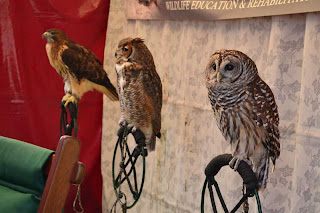 A touch tank for young and old.....Talks and more exhibits down at the docks.....Ew-w-w-w--w! Octopus! A delicacy to some, but not to Sparky! They look like mummified octopi to her! 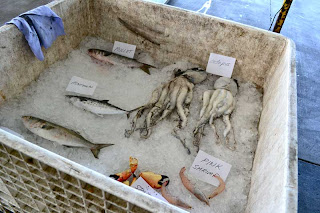 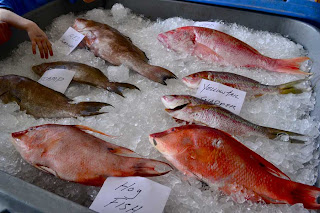 Sparky thought these stone crab claws were COOL! But she wouldn't want to eat them.... 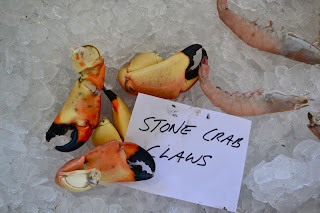 And more seafood than you can imagine...TONS of fresh seafood from local vendors and suppliers. 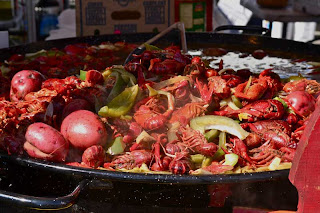 They even had squid fries, we kid you not! 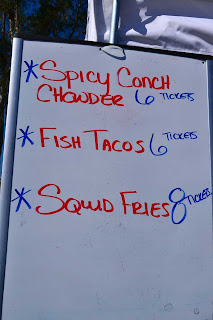 We think there were lots more food booths than arts and crafts booths today.....(It IS a commercial fishing festival, ya know, chimes in Eldo, not really a craft show.) 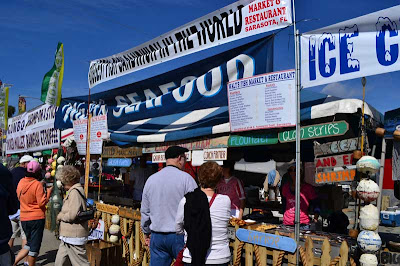 Sparky wanted to sit and sample lots of food, but people were not emptying the picnic tables after they were finished so you could sit down and eat! 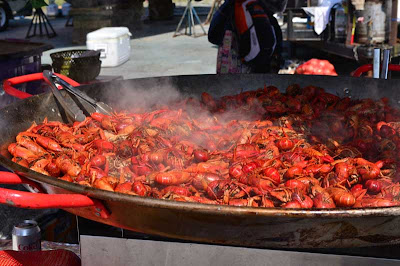 No idea what kind of seafood this is! 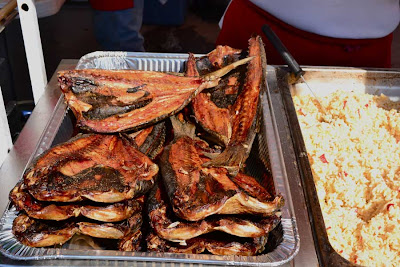 About 25,000 people are expected to attend the festival..Parking is limited and fills up early..Best way to find a parking place is to drive to Coquina Beach in Bradenton on Anna Maria Island, and hop on the city bus and for $.60 for seniors (60 and up), ride the bus back into Cortez where they drop you off right at the park.  When you've eaten all the seafood you can eat, seen everything you wanted to see, hop back on the bus, and for another $.60, back to the beautiful Coquina Beach you go! Or, you can park at the G.T. Bray Park (5502 33rd Ave. Dr. W., Bradenton) Coquina Beach is absolutely beautiful...We're going to go back for a picnic lunch one of these days. Nice shady parking lot, a bike path to ride along the ocean...WOW!
We had a great time at the festival today.....Sparky got to eat after all, not at the festival, but at Anna Maria Oyster Bar on Cortez Rd. in Bradenton. EXCELLENT food and a lot of it for a very reasonable price! Eldy said it was the best fish he ever had! 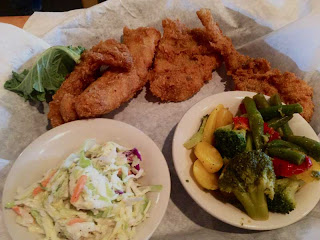 Tomorrow, severe cold hits Sarasota...We'll probably stay inside to keep warm! For the adventurous and hardy souls, the Sarasota Art Fair is tomorrow as well as the Cortez Fishing Festival, both for the second day. Would you believe a high of 58 and a low of 36?  (Say it ain't so! says E.) Yep, but it won't last long...Monday, back up to 70 and a low of 52. But Sparky will LOVE the one day cold spell.....She'll probably go ride her bike some....See you later!
Posted by Jeannie and Eldy at 11:57 PM