We love the city pier. We go there once a week just to see what wildlife we can spot and what possible fishing stories we might hear....An old codger today made a quick comment about the fishing while we were standing and watching boats come in and seeing them scoop up HUGE amounts of bait fish into their boats, which were idling next to the fishing pier. And then he launched into the coolest thing he had seen in the 40 years he's been coming to the pier to fish and people watch. And that story was......

There was a boat that came in near the pier (this took place quite a few years ago, but it's still the old codger's favorite memory of the city pier) and it was obvious that the fishermen were novices and the boat was severely underpowered. A small freshwater motor and too big a boat. Well, the guys on the boat landed about a 450 pound hammerhead shark right near the pier. They hauled it in the boat with some kind of grappling hooks and the shark got MAD. He started thrashing so hard all over the deck of the boat that all their gear went flying overboard, and one of the fishermen went flying overboard along with all the stuff. The guys on the pier were laughing their heads off!

He said he saw a pair of dolphins one time catch a decent size fish and play with it, tossing it into the air, rolling over on their backs and just have a grand old time with that fish. The game lasted for quite awhile, he reported.

We've seen a school of rays, a mama manatee and her baby swim right under the pier, an aging dolphin swim close back and forth, back and forth along the pier. We've seen all kinds of birds get caught and trapped in the fishermen's hooks, even a ray one day...and today, a pair of dolphins swim so close to the beach, had we been out wading in the water, we probably could have touched them. Sparky couldn't run out to the rocky jetty fast enough to catch a photo as they leisurely swam away....

But she did see a persistent snowy egret trying to get an elusive fish out of a rock hole...
"Hey, c'mon outta there. I know you are in there somewhere!" 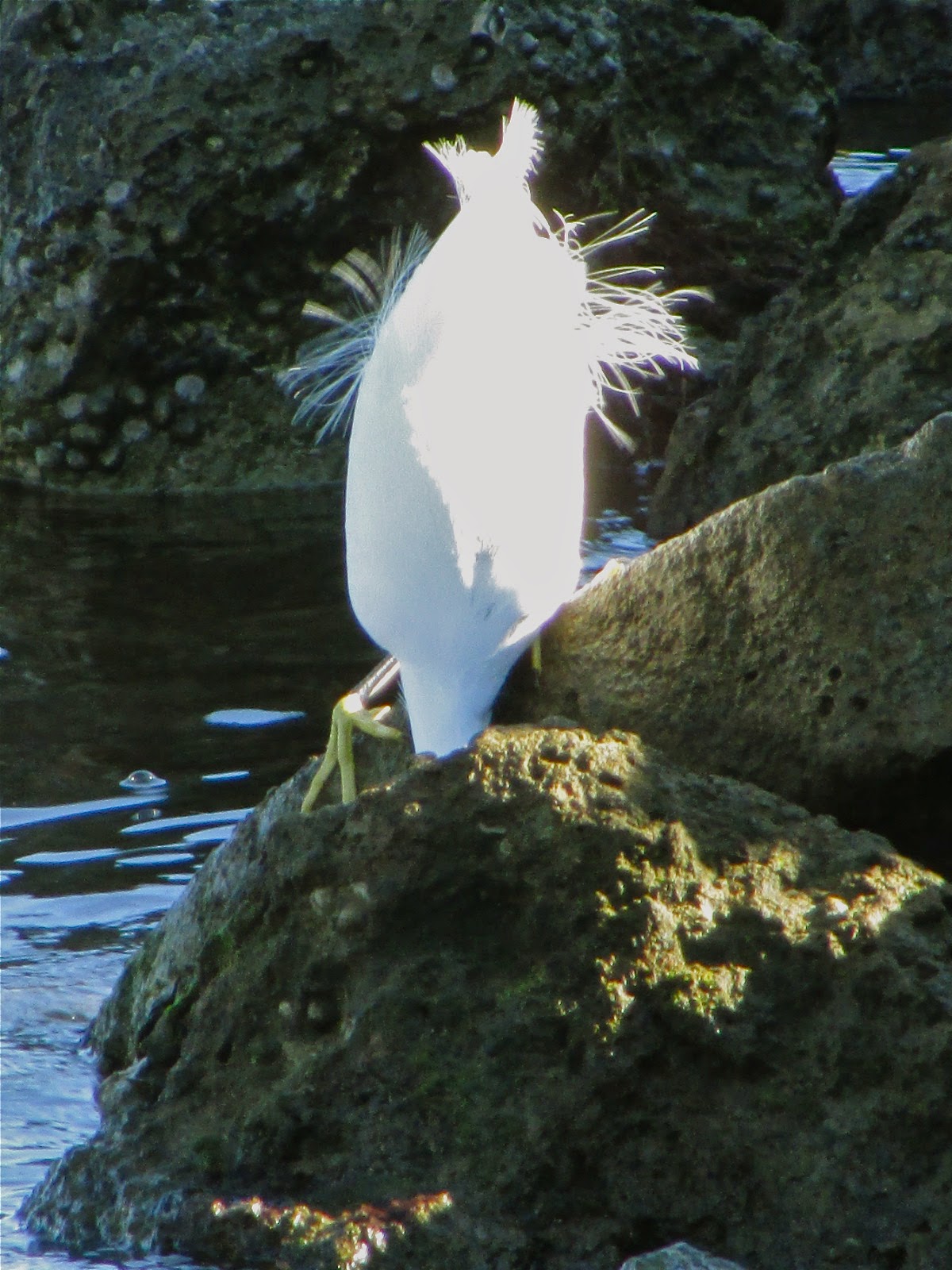 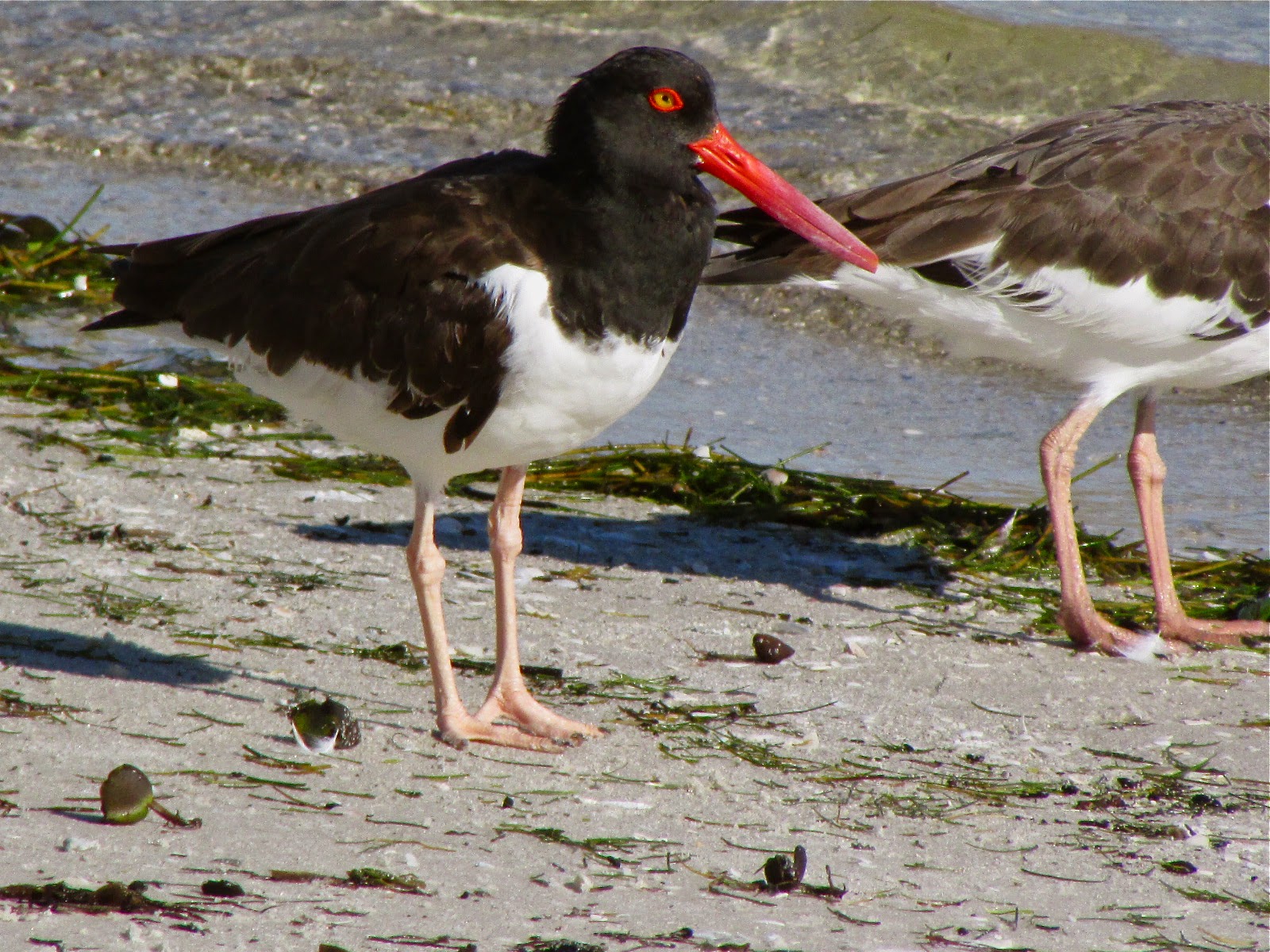 We're really excited! By the time you read this, we will be in North Carolina at a cabin in the mountains in the Smokies....Sparky is really excited about going hiking! Eldo will have to take it easy. He took a spill on his bike and fractured a rib a few days ago. One of those things where the tire caught the edge of the sidewalk as he was crossing from riding in the road and transitioning temporarily to the sidewalk to avoid interstate traffic. The tire quickly twisted and down he went, luckily on the grassy shoulder. But still, a rib was fractured from an encounter with the handlebars and he is now recovering. No bike riding for 6-8 weeks, the doctor said.

See you in the mountains next time!
Posted by Jeannie and Eldy at 7:10 PM 5 comments:

More Nature...Are We Bored Yet?

Nope! Not only does Sparky see lots of nature USUALLY on her weekly or semi weekly bike rides around Bradenton, lots of other people see really cool stuff here in Florida...

On the news tonight, it was reported that people driving on highway 41, a.k.a. Tamiami Trail, saw two bald eagles duking it out along the roadside. It was a brutal fight over territory, and there was a winner. The injured loser, ended up getting the sympathy vote as LOTS of calls went in to the local wildlife rescue organization. He was captured and taken in to receive veterinary care and then released back into the wild. A happy ending!

Sparky would have LOVED to have seen and taken some photos. Unfortunately, she wasn't there, so we don't have any. BUT---another productive bike ride today...Very early in the morning, on the one day Sparky was not subbing this week. Throughout the neighborhood, there are many many ponds and wetlands. Sparky usually sees quite a few birds and today was no exception. Down at Jiggs Landing, the dragonflies were like sentinels, guarding the marsh grasses. There must have been fifty dragonflies all perched at the very tippy top of the marsh grass stems. This one looked like he was in line for take off at the local airfield! 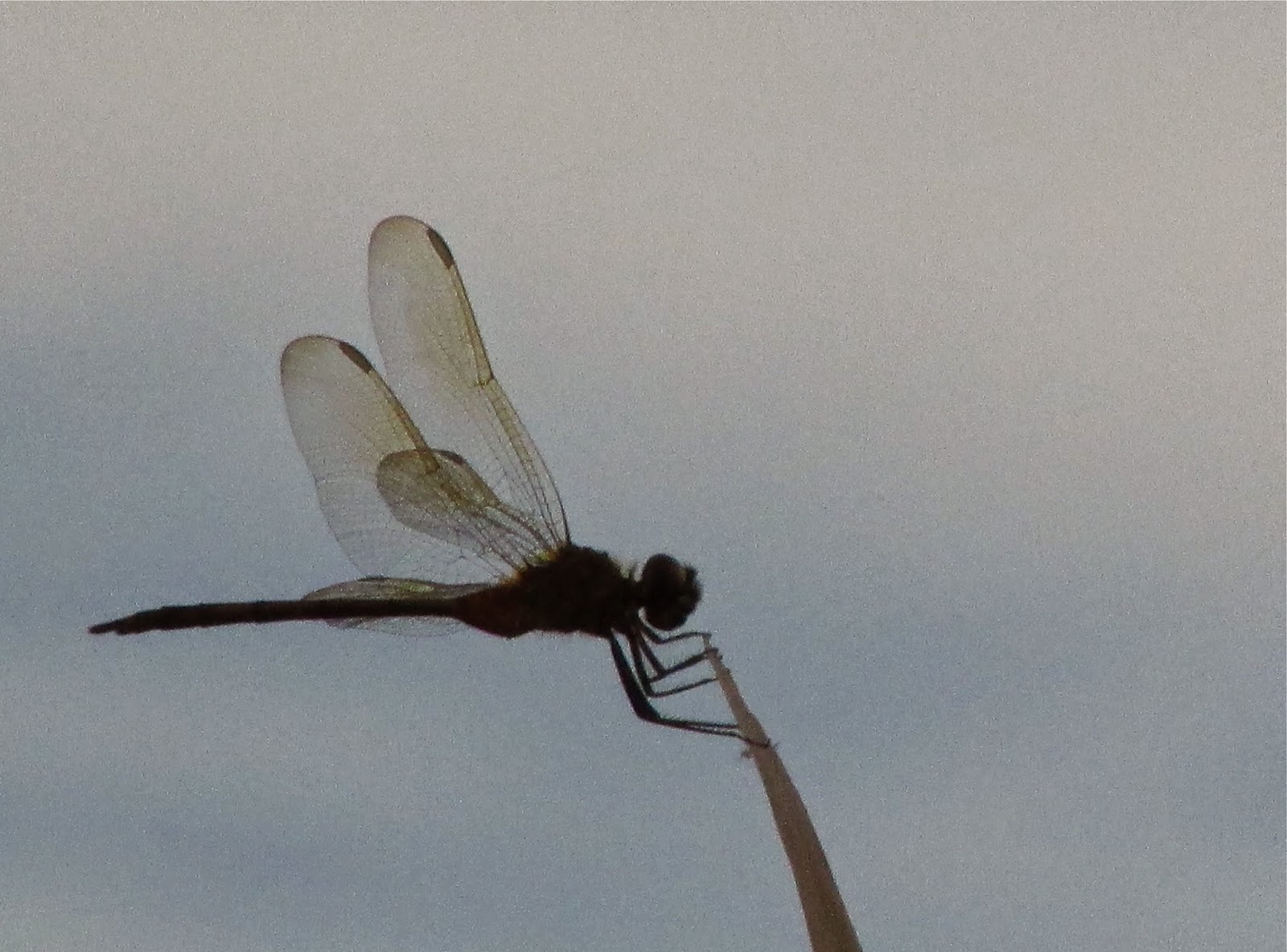 Jiggs Landing is a beautiful spot to stop and rest for a bit....The clouds were reflected in the water this morning, with not a breeze anywhere in sight. It almost looked like snow on the ground, just for a second. (Sparky is still missing snow and cold, but when everybody up north starts complaining about the bitter cold and the ice storms hit, she will be happy she is in Florida. :-) 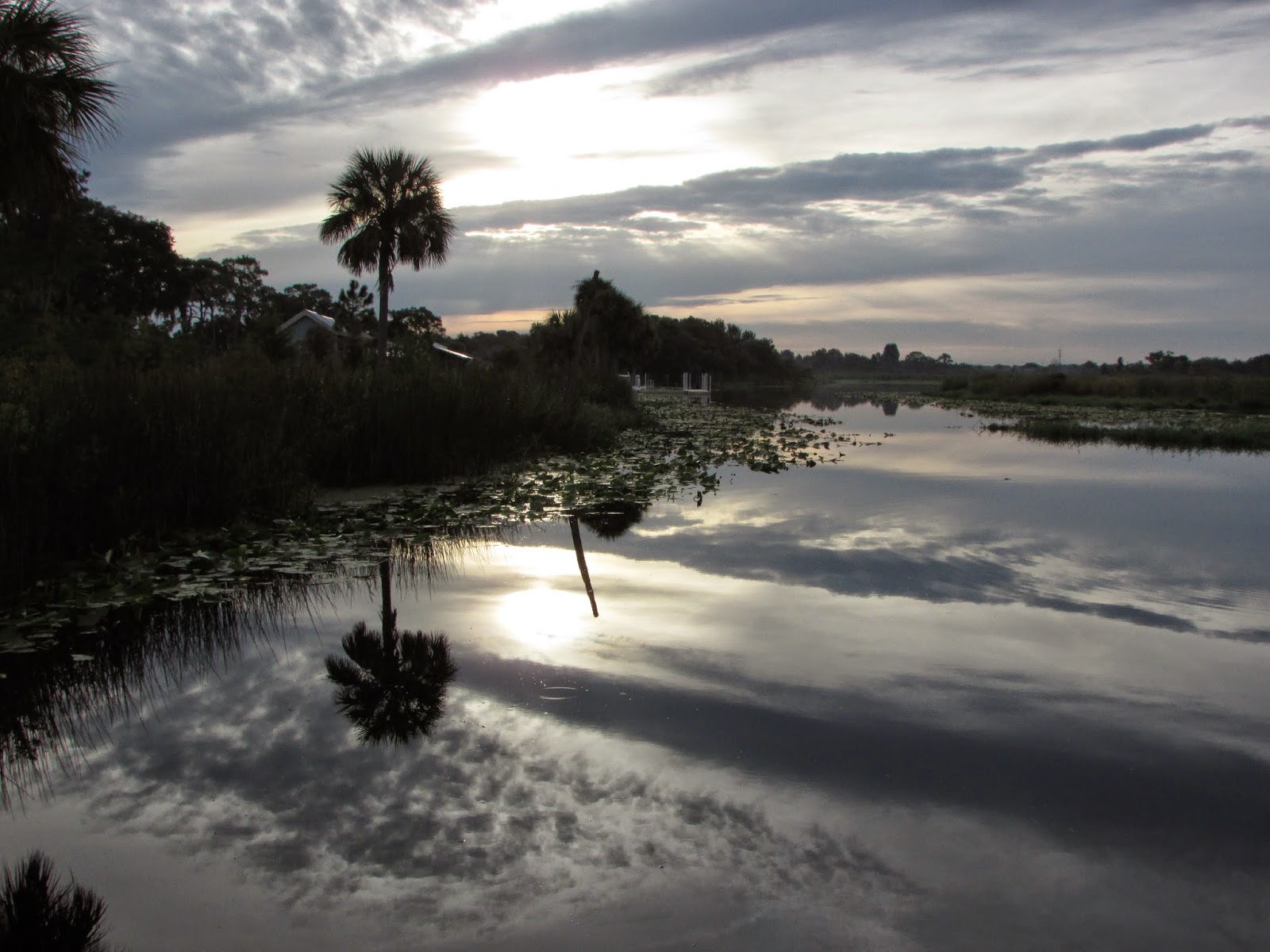 The limpkins were out and about today...Sparky apologizes for the dark photos...Not the best time of day for catching the best light on subjects. This was a limpkin and a tri colored heron (?) passing each other on the marsh.... 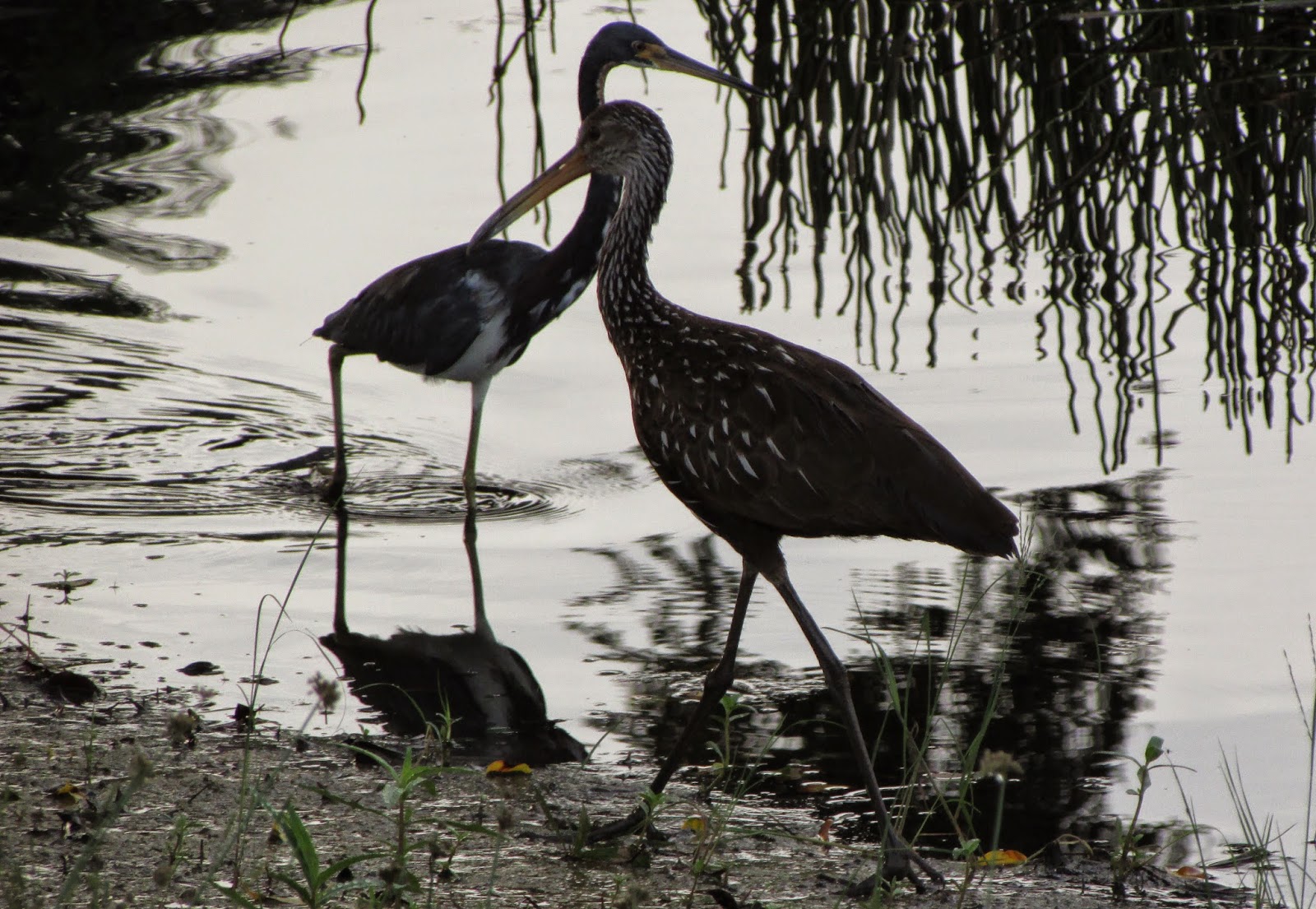 Here's a slightly better photo of a limpkin...A little blurry because he was bogeying down the grass line, worried about Sparky and getting his breakfast at the same time. 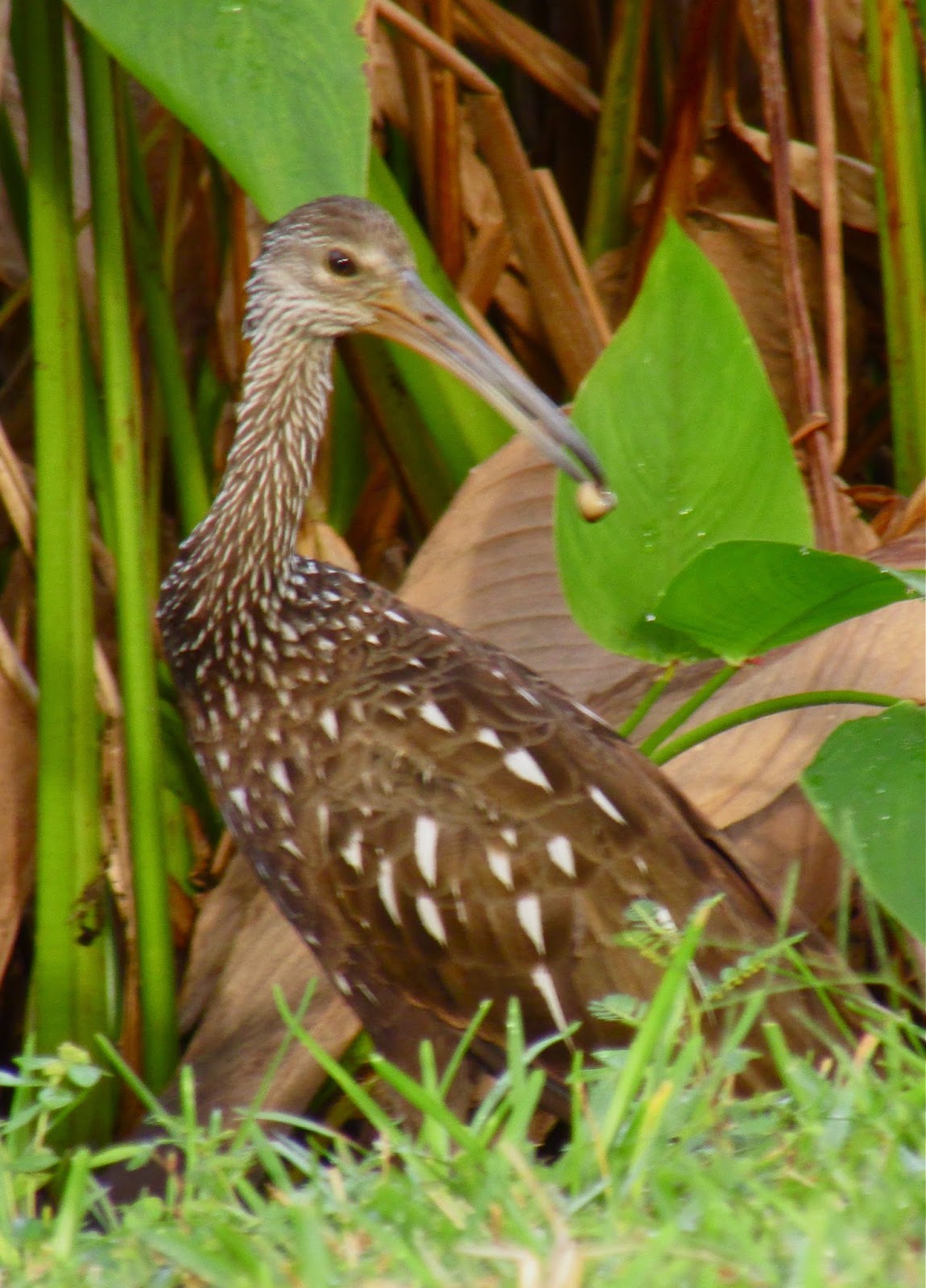 Sparky's ride is not complete without spotting a gator....She read just the other day about a guy working in his backyard on a golf course here in Sarasota...He heard a commotion behind him, and a gator came charging full blast out of the pond and after him, getting a grab on his leg! He managed to get the gator off him, and made it to his house, where he then got himself treatment at the doctor for the leg bite. Yikes! Sparky still likes to get a little too close to gators to get photos, but she is becoming more cautious after hearing stories like this. ("One of these days....."---says a worried Eldo.....)

This gator is in the big pond right on our street, just a few doors down. He was out today as Sparky rode by--on the opposite side of the bank. He looks like a decent size, doesn't he? You are supposed to be able to figure out how long the gator is, by estimating how long his snout is to his eye ridge. Sparky wants to know how the heck can you get the approximate "guesstimate" snout measurement without getting a lot closer to the gator?! (DON'T EVEN THINK ABOUT IT!! warns E.) 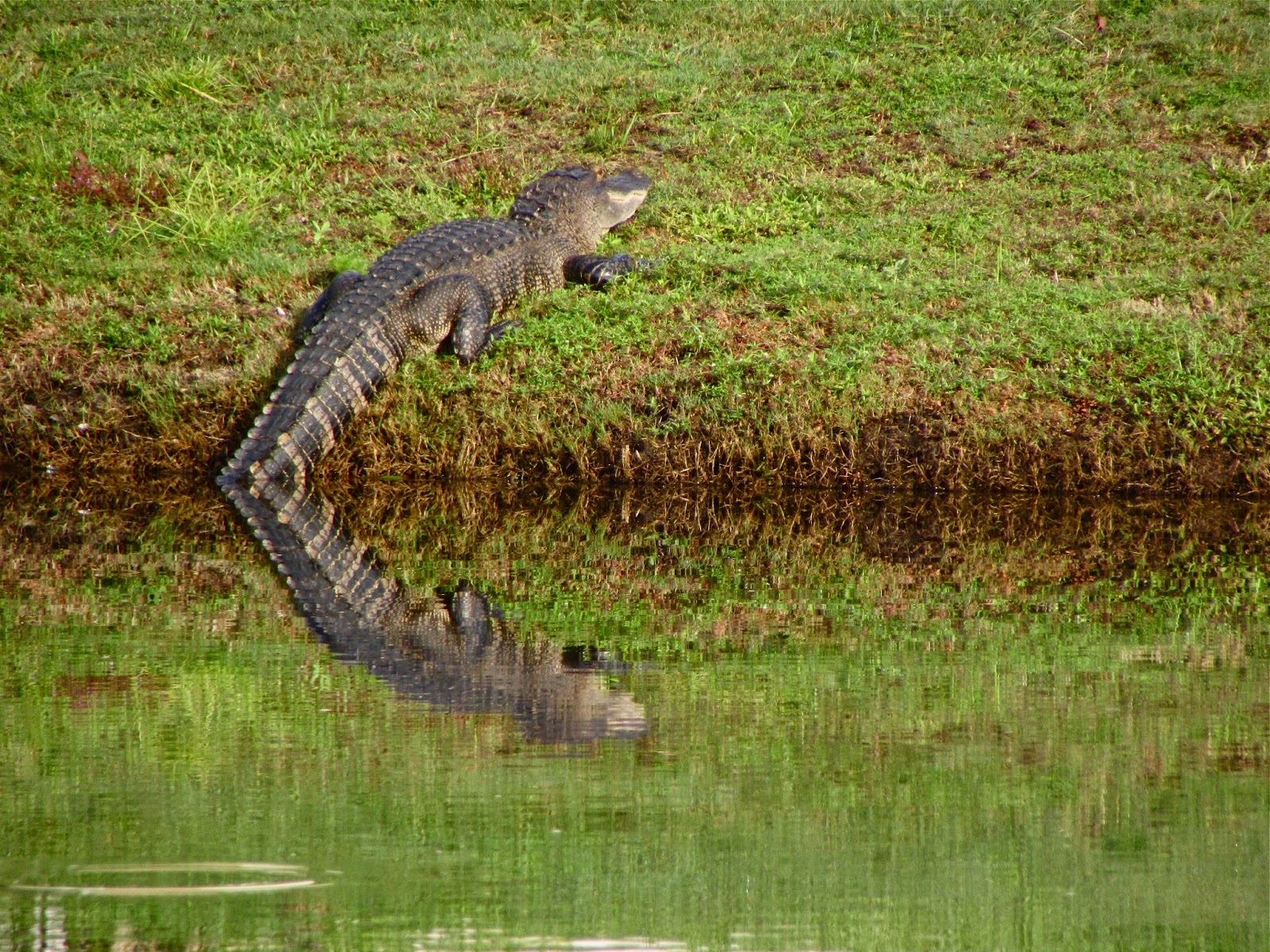 And Sparky passed this one in another pond, keeping cool......She's glad she has a 30X zoom lens. 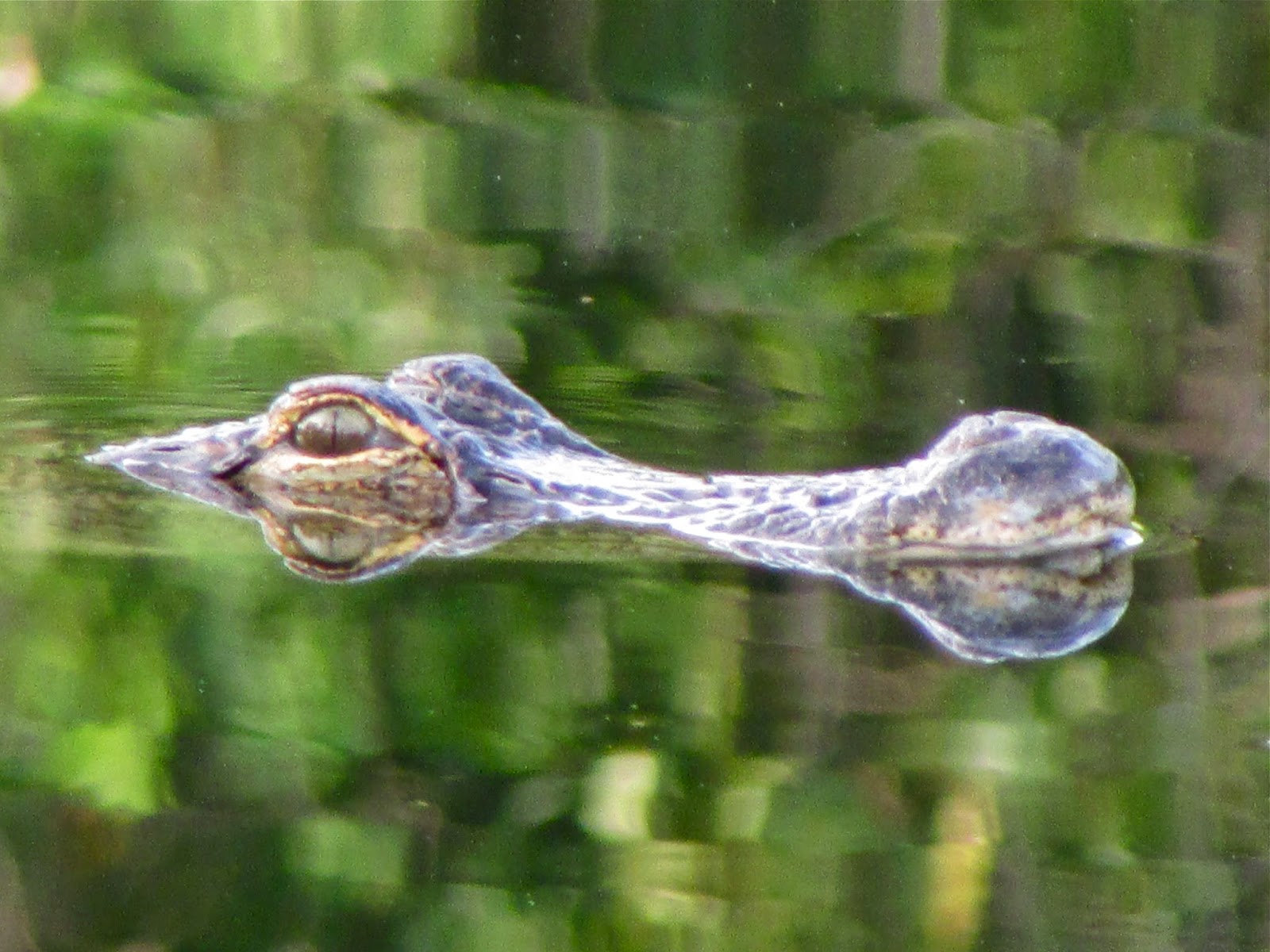 No spoonbills today, that is a VERY unusual sighting in the neighborhood to see one of those...Usually we have to head out to other parts of Sarasota and Bradenton to find them or we just get lucky like Sparky did last bike ride out. But, the cranes are back in force all over the place in pairs  as they usually are, and drilling the golf course for bugs. This one was beside a pond, busily preening as Sparky biked by...He didn't even blink an eye as she stopped to get a photo.....They certainly can contort themselves around to get at those itchy spots! 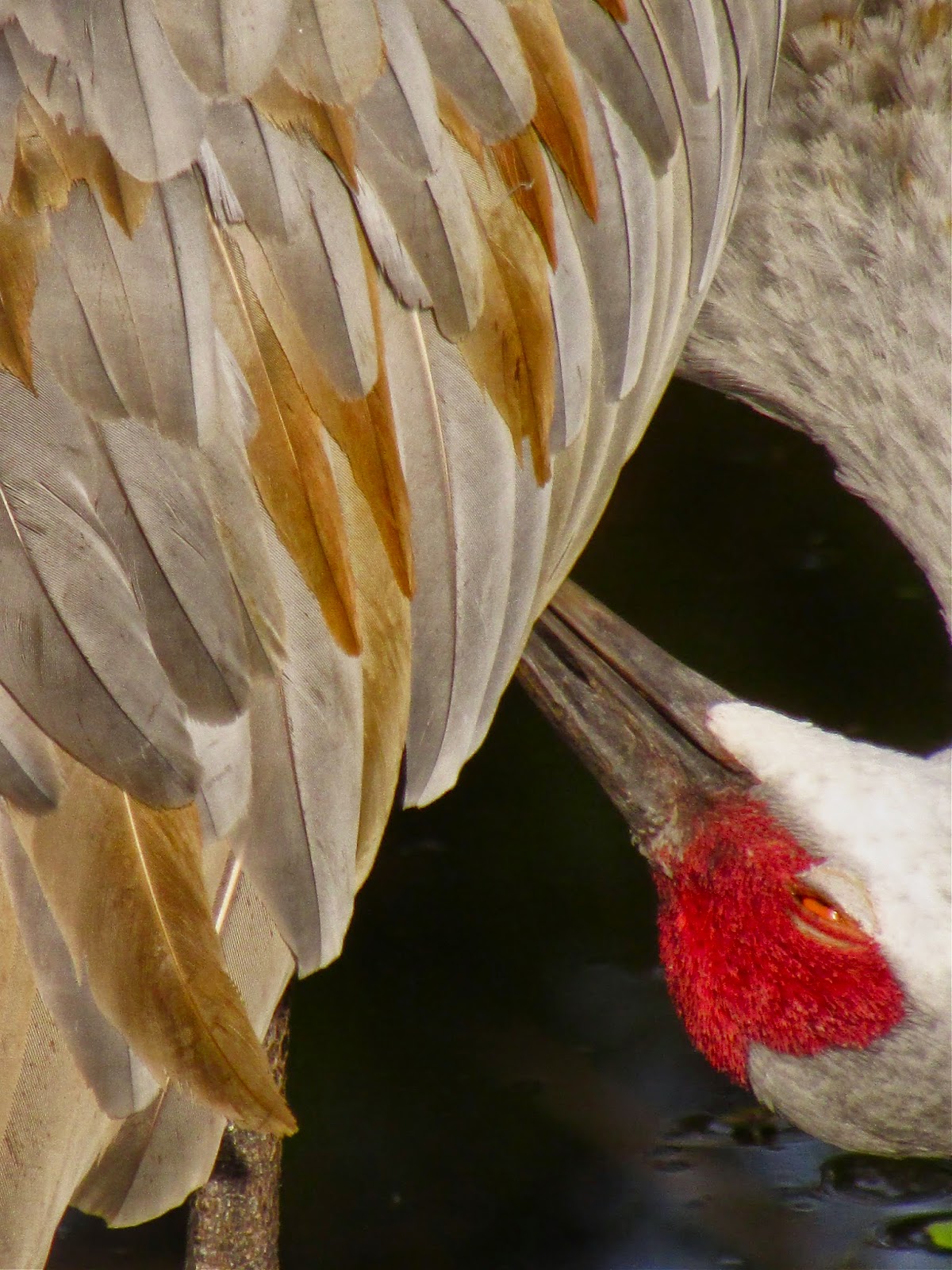 Another great day in the neighborhood! Sparky is looking forward to the fall temperatures coming....The rains are diminishing...We had over 10" last week, and Myakka River State Park flooded and closed most of the park. Sparky thinks soon she will want to get back over there to go gator watching....(What is it with my woman that she has this thing about alligators???? wonders Eldo.)  Don't know, dear...they are just very cool looking and so dinosaurish.....And ever since we saw a gator capture his prey and heard the bones crunching as he chomped down while we were watching at the bridge at Myakka River State Park, Sparky wants to go back again and again..... 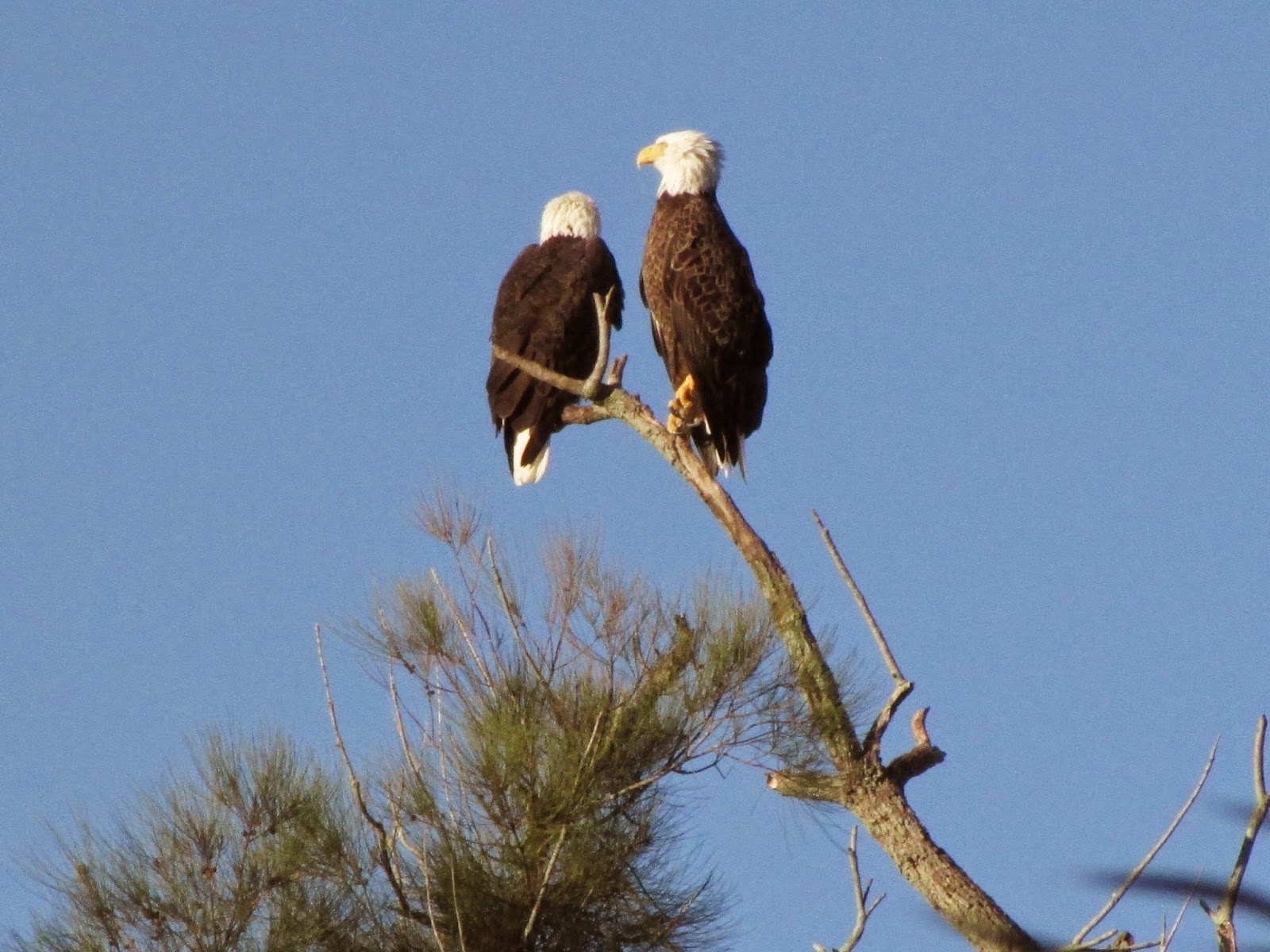 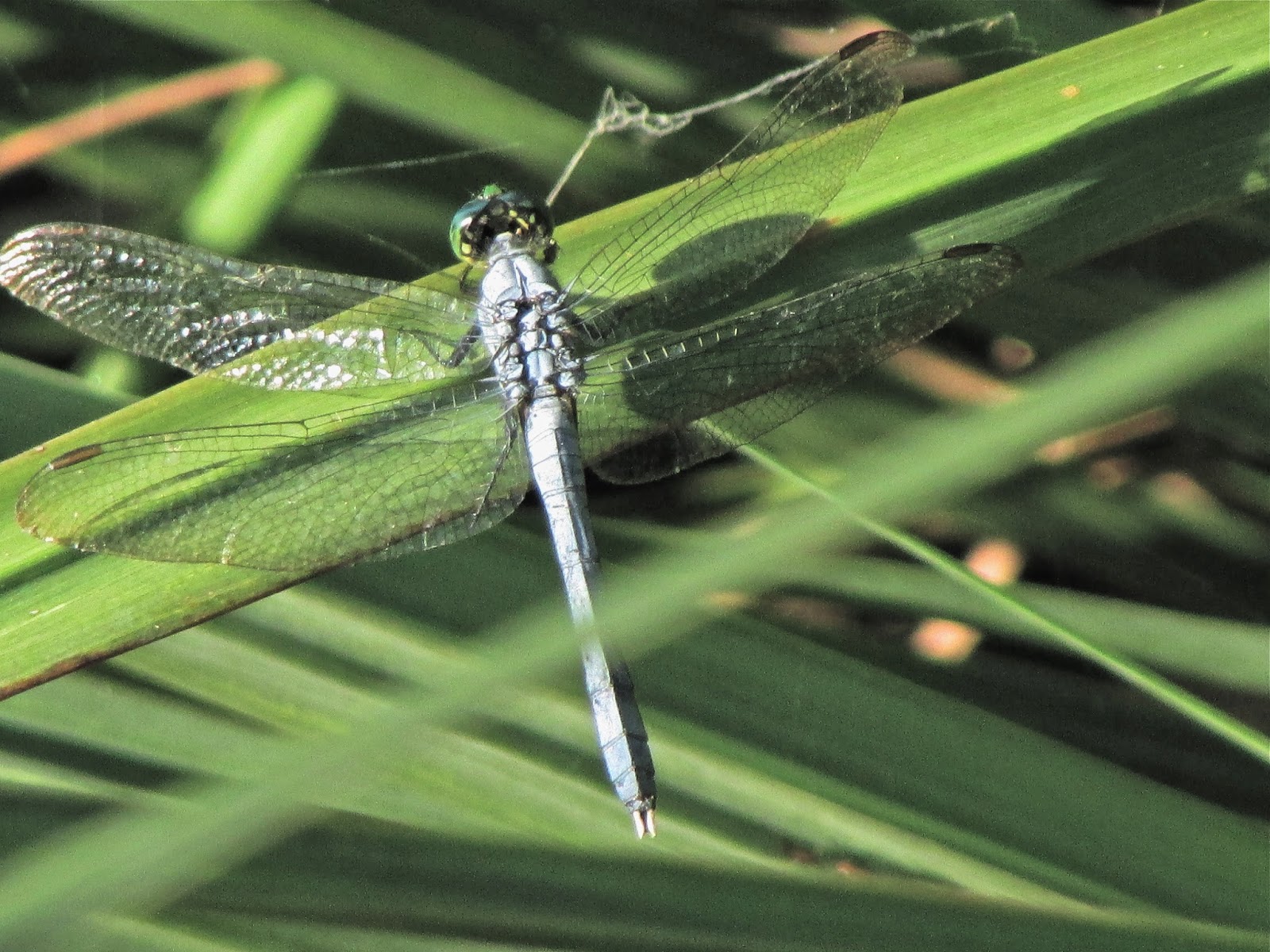 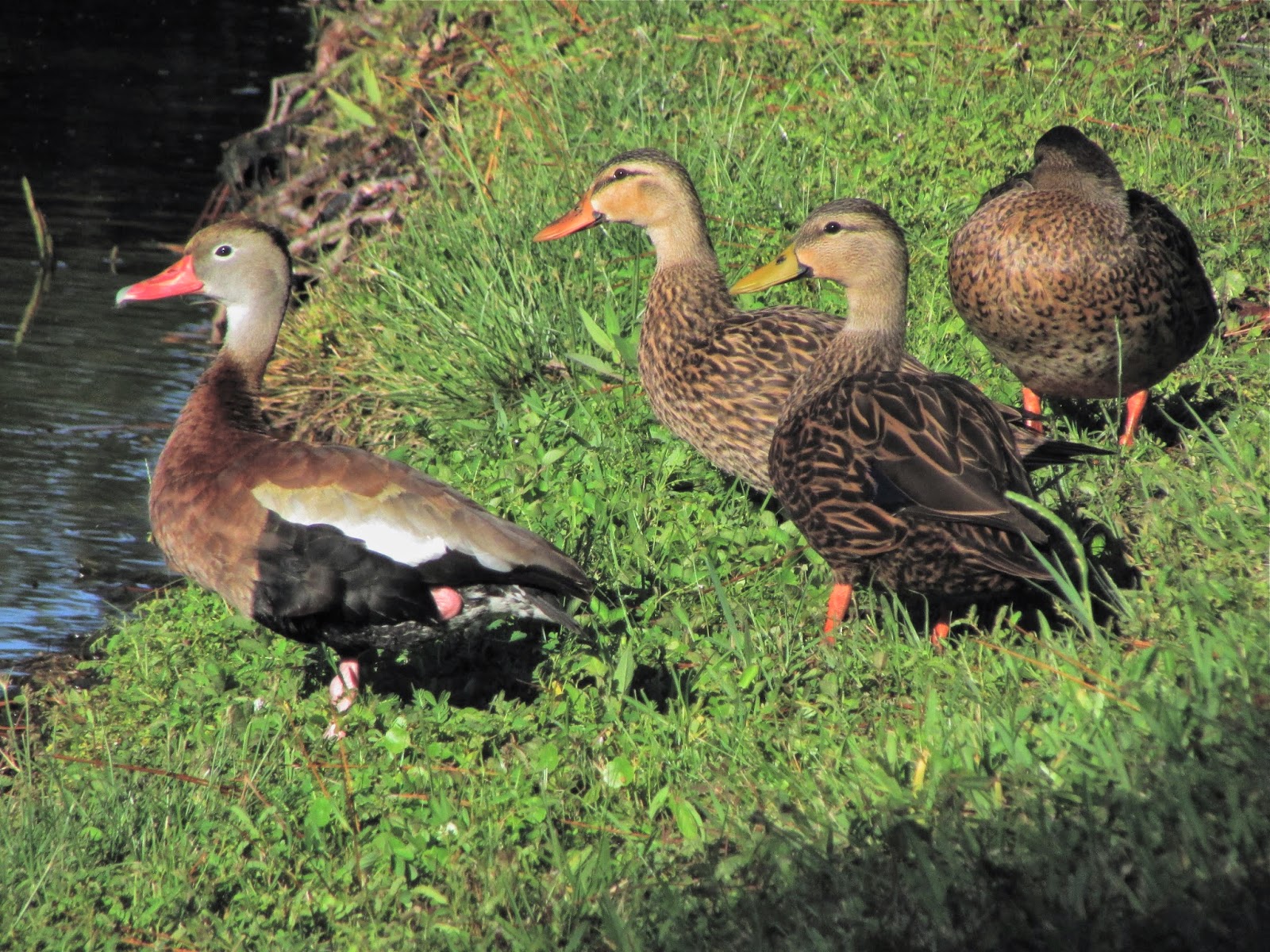 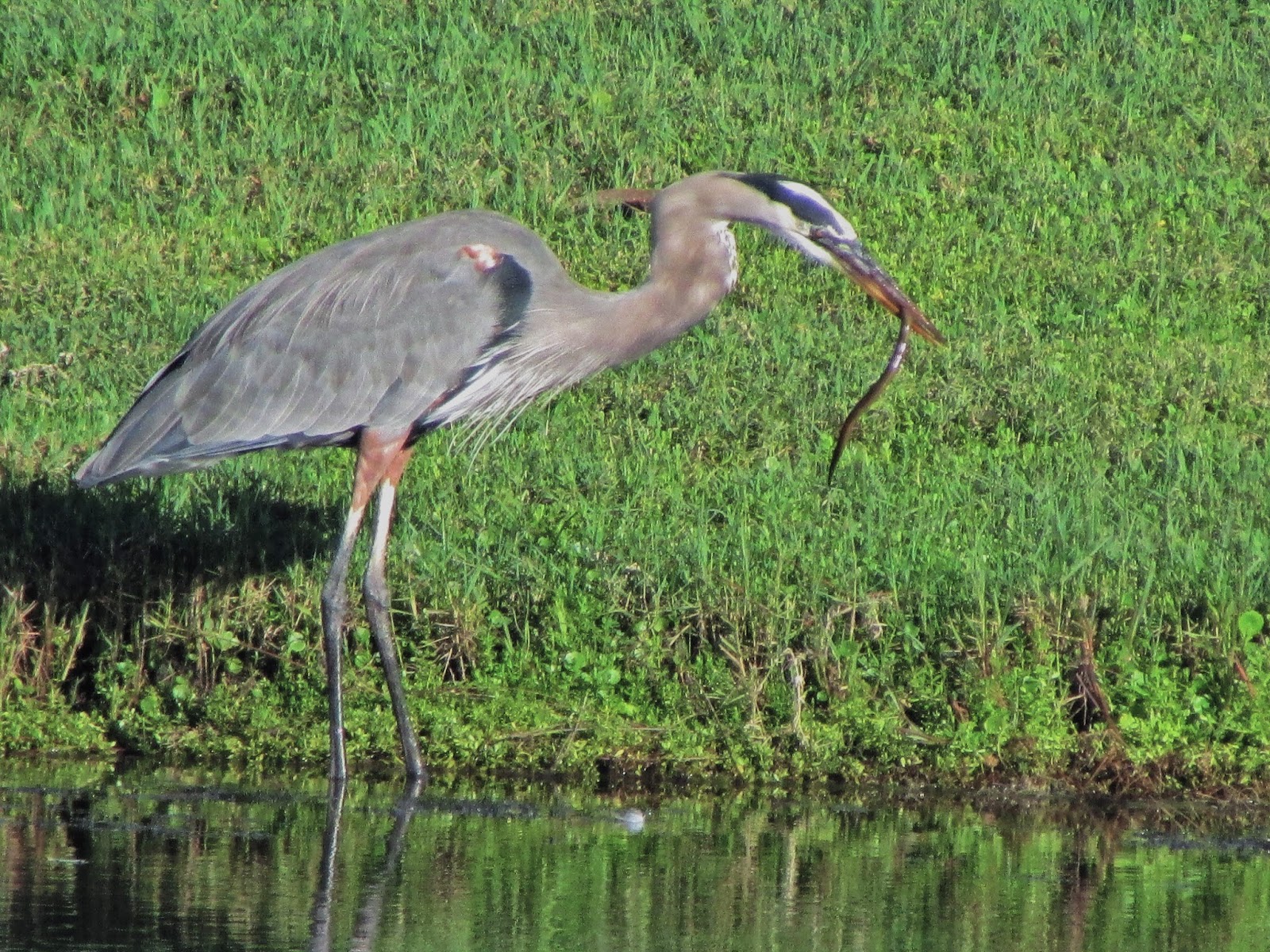 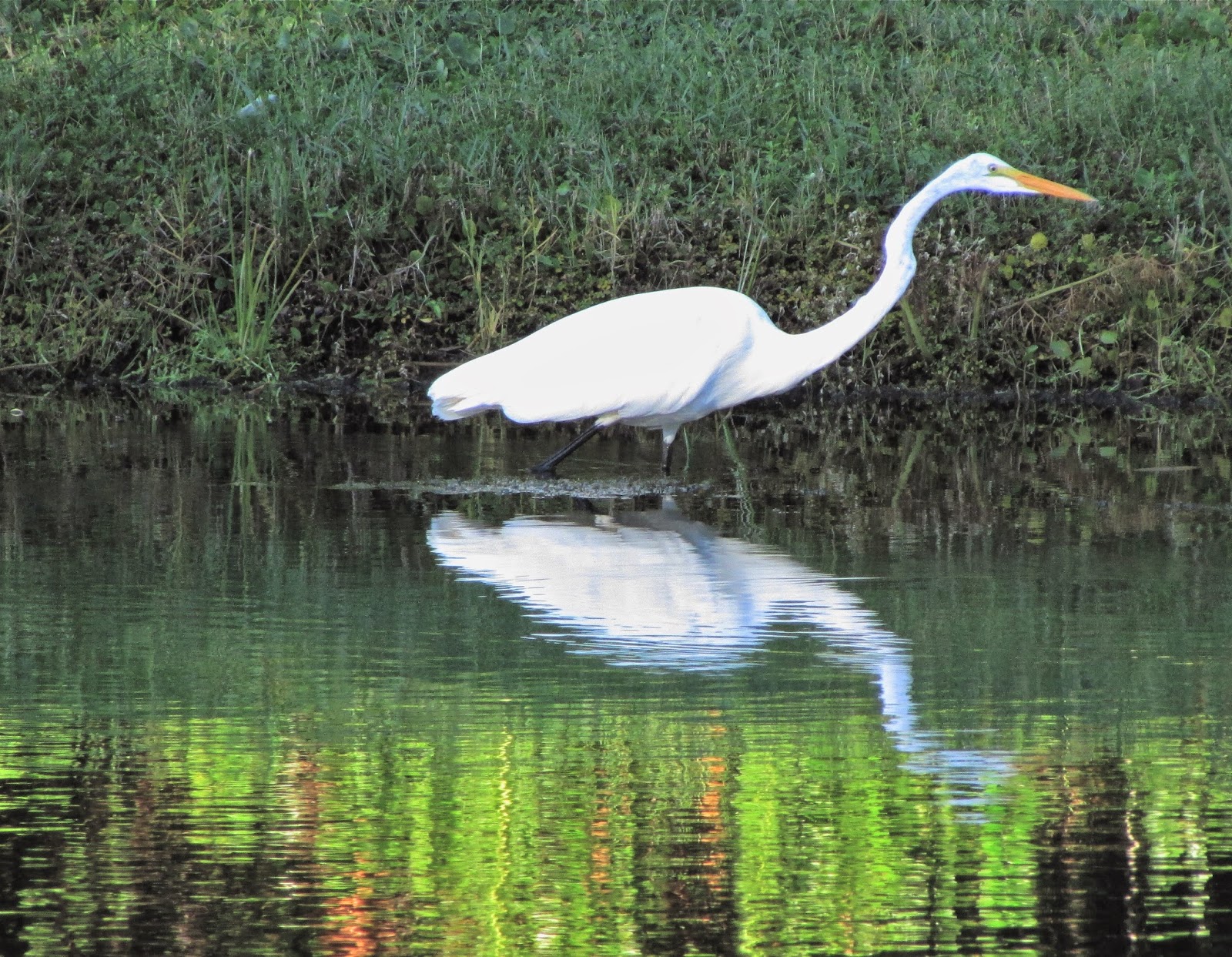 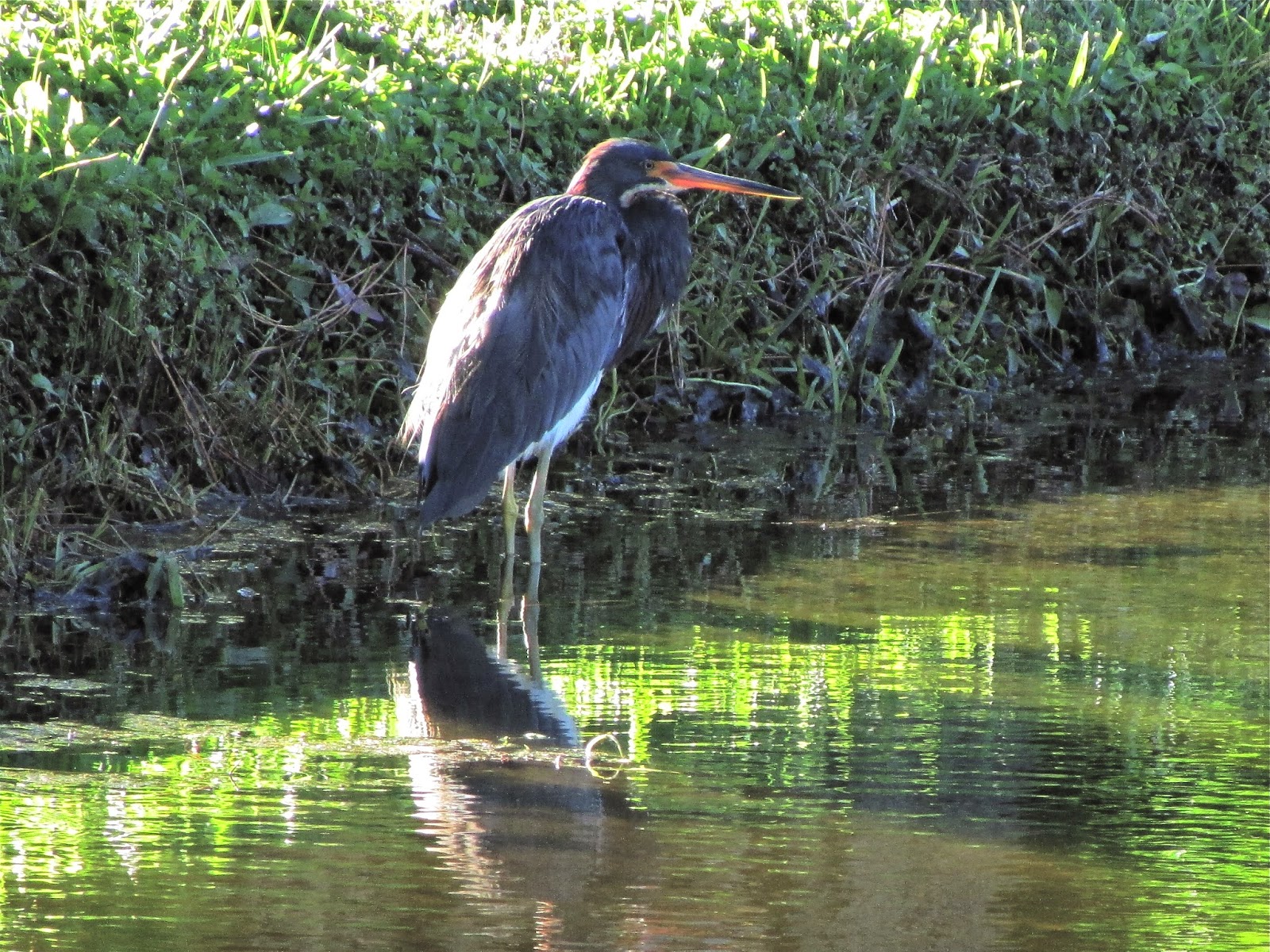 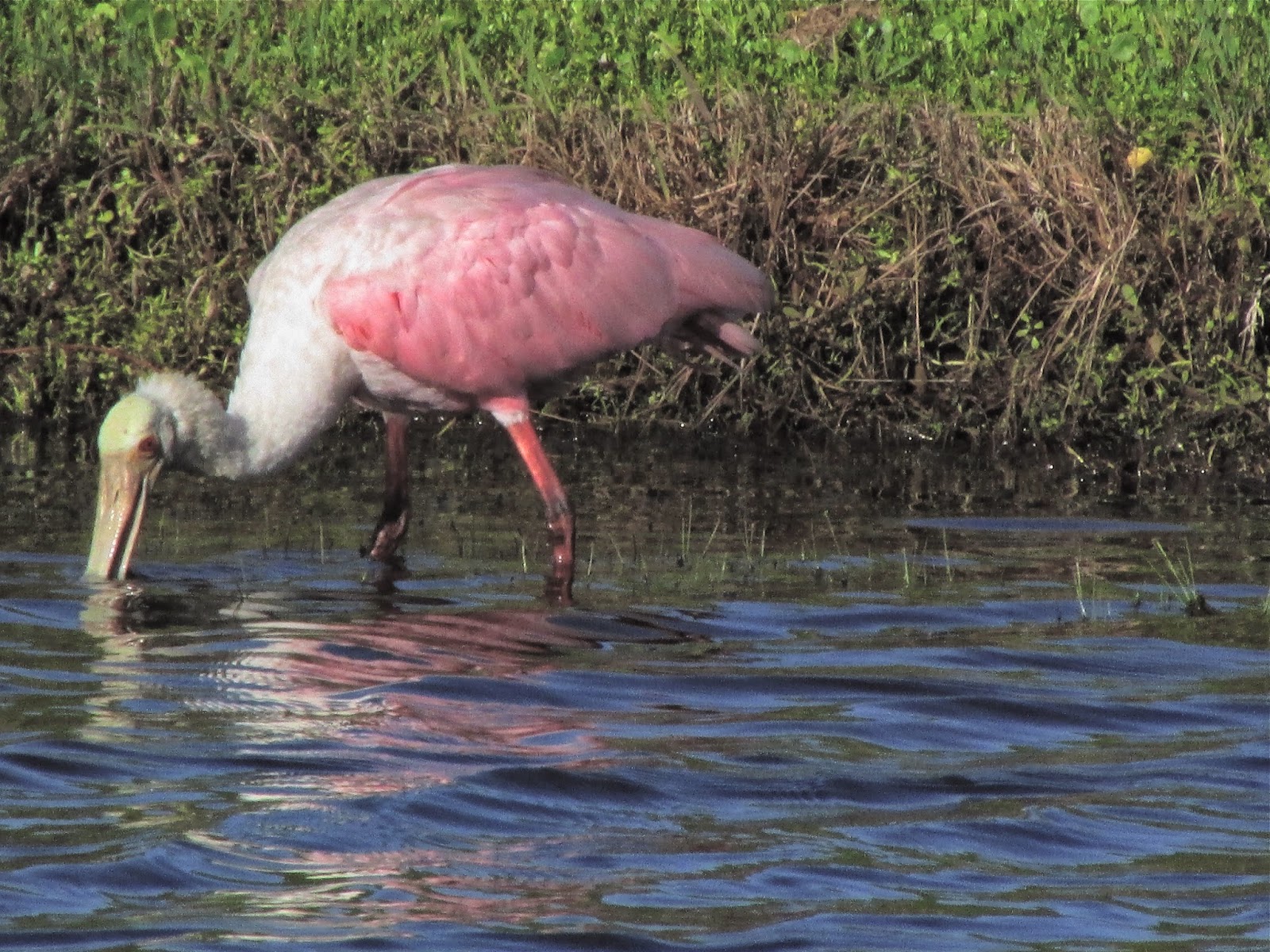 A fine day for a bike ride, indeed!  Not a cloud in the sky and temps will be moderate this coming week....YAY! About time! Sparky will be heading back out more regularly now, on her bike. She's got to get back to exercising on a regular basis!  See you later!
Posted by Jeannie and Eldy at 5:18 PM 4 comments: