It Pays to be ADD?

Hm-m-m-mmmmm...There are advantages to being an adult with ADD....You usually have a short attention span which is NOT an advantage, but when you are focused on something, you get locked into a strong tunnel vision mode.  There's NO DISTURBING Sparky when she's 1) reading her Kindle 2) crafting something, 3) working on the blog or 4) on her bike going a "hunnert miles an hour" down a trail (as Billy Bob likes to say)...."DING, DING, DING! PASSING ON YOUR LEFT!" as she heads into the lead on the last bike ride on the Legacy Bike Trail, (focusing on getting to that restaurant don't you know! says E.) Another bike ride in two weeks...Woo-hoo! And a return trip to the Pineapple Restaurant in Venice. Another WOO-HOO! (See, she's jumping topics all over the place, sighs E.)

Guess that's why Sparky has to try lots of different types of exercise offered by Sun 'n' Fun...Today, let's try Body Fit offered by the very capable Joann, resident of Sun 'n' Fun. Sparky showed up for the first time today...It's offered twice a week for an hour each time. Here's what equipment the more experienced class members told Sparky to get out of the workout storage room: 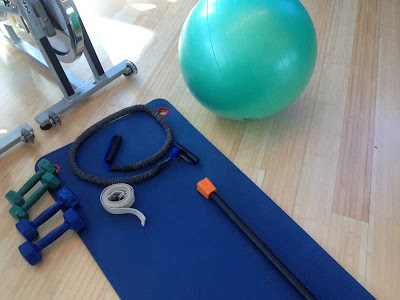 Did we use it all? Yes, we did!  We used the green exercise ball for overhead arm exercises and balancing while doing leg lifts, we used the stretchy cord for chest presses and arm exercises. We used different sized weights for different arm exercises. We used the strap for stretching legs at the end of the hour. We used the weighted poles to hold onto while we stretched at the end of class. We shifted equipment often and Joann managed to keep Sparky's short attention front and center. Especially when she barked, "SPARKY! GET THAT BALL OVER TO YOUR SIDE MORE! Keep that back straight!" Sparky just popped right back an answer without thinking,  "YES, SIR, DRILL SERGEANT, SIR!" Don't know where THAT came from, except Sparky's daughter is in the military. :-)

Sparky found out she has 1) no abdominal muscles--no surprise there, 2) good arm and leg strength from all her bike riding--she was able to do some plank exercises...BUT-- 3) she realizes that she has a LONG way to go to getting in better shape!

Joann is quite the taskmaster and she is VERY motivating. She also teaches the spin cycle class which Sparky really enjoys. That's twice a week, too. Not sure if Sparky enjoyed today's class or not. It was very frustrating not being able to do several, well, more than several of the exercises, but that would improve if Sparky continues to attend. Sparky is not sure if she will or not.. Too much work! The body says, "NOT THIS CLASS! I don't think I like this class! What's the matter with swim exercise class?" So, we shall see if Sparky returns or not.....

Sparky is enamored with pickleball. She found out that there is a women's social pickleball on Monday nights, so she went to that, too! Played four games tonight and got to play some really good pickleball players, which always sharpens up your game if you are a beginner like Sparky. Maybe if we stay another month, Sparky will become closer to being a skinny Minnie...HA!  She WILL definitely be in better shape, however....Eldo is still nursing the stretched calf muscle, but he's itching to get back into pickleball.

Sparky wore Eldo out with all her activities...He spent most of the day researching stuff....See you tomorrow.....