Sparky and Eldo are in Indiana!

After a fairly short, uneventful four hour drive from Park City, KY to Batesville, IN, Sparky and Eldo settled in at the Indian Lakes KOA/Thousand Trails RV park in Batesville, IN. Sparky remembered from her Indiana college days that the Batesville Casket Company is based in Batesville, IN. They are one of the two largest casket manufacturing companies in the US. Sparky is wondering if they have company tours....really! She will let you know. (OMG, count me out if they do, says E.)  Ummmm...Darn, no tour.

Batesville Indian Lakes RV Park is a combination Thousand Trails Park and KOA. The KOA part is smaller, the Thousand Trails part is lots bigger. It's a HUGE, sprawling campground of over 800 sites all around a lake and river system. There are phases to the campground, some much newer than others. The sites vary from very uneven and narrow to extremely wide and level.

Phase 1 is personal sites people have purchased. Phase 2 is 30/50 amp area for Thousand Trails members and other campers, Phase 3 is 30 amp water and electric, Phase 4A is for seasonal/annuals ONLY, Phase 4B is for Thousand Trails members if there are any spaces (it's peppered with annuals and seasonals) and phase 5 is personal sites. The KOA part is clearly marked on the map when you receive one, but where you get to go if you are NOT wanting KOA is another story, depending upon how full they are in the different phase sections. Got it? It's very confusing. See the legend of the map? 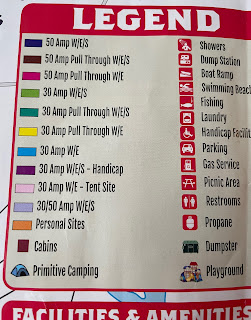 Sparky might not even have the phase designations right except she's sure about the phase 2 where we first started and got flooded out almost immediately with all the rain that had been hitting the area. Don't know WHY we picked this first site, except that rigs were coming in, and we had to decide quickly a site that was LEVEL and the one we picked was.

Phase 2 section has quite a few uneven sites and we tried two sites and couldn't get level before we noticed the traffic was coming into the park. It was like wagons were circling the campfire, or playing musical chairs. We had to hurry up and pick one! Only problem was, it was severely flooded on the door step side which we didn't notice till we parked and put the stairs down and the water didn't recede after one night. So we ended up moving to phase 4B after getting that cleared through the wonderful campground manager, Brenda, who so kindly reworked some scheduling to squeeze us into a great big gravel site. Much better!

The management is upgrading the electrical in the park and the interior roads are great for the most part, much better than in many Thousand Trails parks. You can easily ride a bike all around the park and get over seven miles in. You can walk the park every day and get LOTS of miles in, without covering the same route each day. There's supposed to be a nature trail, but Sparky never found it. Instead, she met a wonderful couple across the street one day when she investigated the source of some wonderful piano music and got a lovely walking partner, Donna, for her daily walks in return. The couple we met, Ken and Donna Grenier were just so friendly, wonderful, and with a great sense of humor  we enjoyed getting together more than once to chat all things travel and RV. AND, Ken is a piano player-he carries his Yamaha keyboard on board with him and plays outside when the weather is nice. It's like having a free mini concert in your backyard....Safe travels, you two! Hope we see you again!There are some wonderful things to do nearby while in Batesville, IN, but you have to travel a bit to see them. Cincinnati is 42 miles from the RV park. You HAVE to go see the American Sign Museum while you are in the area. What a cool place! Yes, they are doing limited self-guided tours. It's a small parking lot for the museum. You purchase your tickets/time in advance, and seniors are 10.00 each. The museum is dedicated to preserving the history and artwork of commercial signs and sign making. 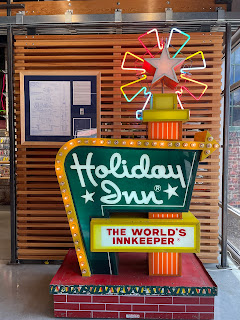 More than 100 years of history of sign making and signs are in this 20,000 square foot building. You can take an audio tour on your phone, or take photos of the signage beneath the signs. Sparky got tired of juggling two phones (one for the tour and one for taking photos), she finally just took a bazillion photos of the place and all the information below the signs. A LOT of history is covered into the making of signs from the 1800's to today. It's all about the lettering processes, the plastics, the evolution of sign making from hand lettering showcards to modern day lit signs. It was fascinating! 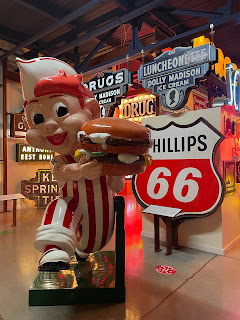 Did you know that the Big Boy icon  used to have red hair? It was thought back in the day that red haired kids were mischievous and so they wanted the franchise to appeal to every fun loving kid and grownup. He also used to have a slingshot in his pocket, but once that became thought of as a weapon, they did away with it--and the red hair, to be more politically correct. They also changed his shoes to black, too...No more saddle shoes! 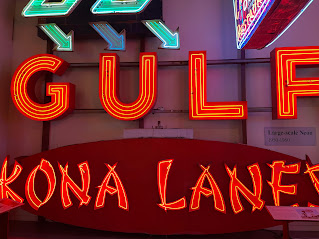 There's also a full time neon workshop in the museum called NeonWorks of Cincinnati. Sparky talked to a worker in the shop. Sparky asked if there were any health hazards to working with neon? No, she answered, any chemicals that are used in the process are fully contained--mercury, argon gas, etc. She said that her grandfather was a neon bender (one who forms the tubes for signs).. Sparky wanted to know if neon still was in demand, and the answer was yes, but it has decreased a bit since LED lights are now getting to be the norm, but there are drawbacks to that form of sign making she stated. Sparky said it sounded like a really cool job and she nodded an enthusiastic yes, it really was a dream job for her! 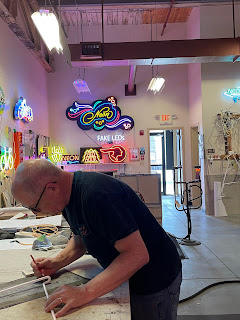 You can watch the neon tube benders making the lettered signs right in front of you! They mark where the bends are to be in the tube, then they heat the tube to about 1500 degrees to bend them, then blow through one end of the tubing to cool them and keep the dimension of the tube open, then they go back to the workbench and calculate and mark the next bend. You can watch a video as to the process as well right there in the museum next to the workshop.

There is a mural tour in Cincinnati. Sparky SO wanted to do that tour, but with the oil leak in the truck, and repeated trips to the dealership to try and get the issue fixed, our time was curtailed while we were here in Batesville. Check out that mural tour, AND the Cincinnati Union Station, an Art Deco station with three museums inside. Those two are on our bucket list for next time. A big thank you to Donna Grenier for giving us tips on where to visit!

The latest on the truck oil leak....sigh...The oil started leaking after an oil change way back in Texas. It wasn't bad, just a few drips under the truck, but we thought we should get it checked out. The first dealership in Texas jacked us around for three weeks. They said we had TWO leaks. Wouldn't return our calls, wouldn't keep us informed, said they had to order parts, part of the parts came in, but not the special tool needed to perform the maintenance, blah, blah, blah. We had to leave for our next destination, so we gave up trying to chase down somebody who cared at that dealership. Second dealership in Kentucky--they fixed the leak. They didn't. It leaked worse. We went back and they ordered a special oil filter gasket that required an adhesive 'set'  and put it in. We thought we were ok. Then we lost or "threw" oil from Kentucky to Indiana, about two quarts while towing. We went to the third dealership here in Lawrenceburg, IN. They said they couldn't find ANY leak. They found a shop rag stuffed way up into the area where there is some kind of oil reservoir. When they pulled the shop rag out, it was totally saturated and a quart and a half of oil came out with it. They wiped everything clean and decided to  insert a dye to try and trace the leak. The truck goes back to the dealership tomorrow to see if the dye shows anything. The truck is still leaking oil, but it's the smallest amount we've seen so far.

Well, that's it for now...we have about four days left here in southern Indiana...then we head towards Howe, IN for two weeks near Eldy's family. We'll get getting ourselves ready to go to Alaska in two weeks after that! See you later....