Sparky has always wanted to hike the Deep Hole in Myakka River State Park. It's a deep watering hole in the middle of the state park, and there are USUALLY hundreds of alligators sunning themselves and swimming around. The rangers only allow 30 hikers at a time to hike back to the hole and you have to register in then check back out when you leave.

The timing has to be right to see a lot of alligators. The ranger says they don't like cloudy, windy days.  You don't want to go when it's an extremely hot day as more gators will probably be in the water than out, so a day in the coolest part of Florida's hot, hot, hot season which are the winter months of December, January, and February and a little later, are best. Sparky had some time one day, not too long ago and the day was starting out in the sixties, with a high in the eighties. This might be a good day to go even if it was a little outside of the optimal viewing time. It was during the week, less foot traffic at the park probably. She wasn't subbing, and anyone else she knew that might be interested was working, so on a whim, she decided to go it alone. She called ahead to see if the hiker list was full. Nope, the ranger said. Not very many were out on the hike today.  Hot dog! Sparky decided to head over to the park. First--supplies---hat? check! Water? check....sunscreen? check. And off she went.

Now....if you have been following the blog for awhile, you know that Sparky is directionally challenged, even with GPS. What's worse, is even after visiting a local place many times, if it's out in the boonies, Sparky can still get lost. She thought she knew the way to the park so didn't have her GPS on. Sparky got off at the wrong exit off I-75 and proceeded down a certain road, saw a sign that said Myakka River State Park and thought she was on the right path. Forty-five minutes later, she still hadn't arrived at the park, and the park was nowhere near to be found. (it's normally about a 20 min. drive from the house). Sparky turns on her GPS  on the phone, and discovers she has a half hour drive to return back to the park, which she overshot. (Sparky wastes a lot of time continuing to drive thinking she can see something familiar eventually that will give her a clue as to what direction to go.) Ah, nope...ain't gonna happen, says a knowledgable Eldo. Needless to say, Sparky was clueless that day. She finally arrives at the park at 11:45 AM, when the heat is beginning to build.

She checks in and she's off! Sparky was glad she had on athletic shoes. The ranger checked for that before she left, saying that people hike the trail in sandals or flip flops sometimes. BAD idea! The trail is 2.5 miles one way on a deeply rutted sandy tractor trail. Hard on the ankles, hard on the feet if you are not wearing the proper shoes. And hard, if you have a bad ankle with tendonitis, Sparky learns. 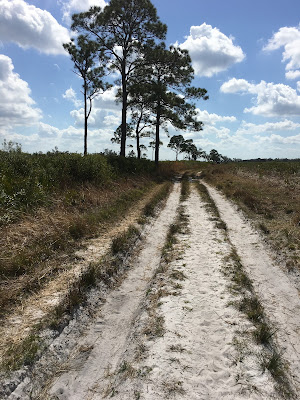 It was hot....no breeze...There is VERY little shade along the way. Sparky should have brought TWO bottles of water, she was thinking....On she trudged....

Not much to see along the way...no birds...no animals, some farmland.....Sparky encountered two people hiking back, but saw NO ONE along the way, a BIG clue that this was not the best time to hike the trail because of the heat baking the sandy trail. Sparky trudged on.... 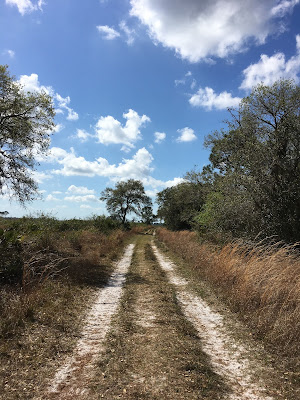 There are no places to sit along the way, no stumps, no rocks...Sparky was getting tired....But almost there...Once you get there, the trail opens out into a clearing and you see a big pond ahead of you. There are some bushy plants that form a mound in one spot in the clearing (remember that for later) and then, you see the gators.....Sparky apologizes for poor photos today...the camera lens was foggy or dirty, not sure which, and Sparky was so hot and sweaty, she forgot to clean the lens. She was also a little dehydrated and not the steadiest on her feet while snapping a few photos. 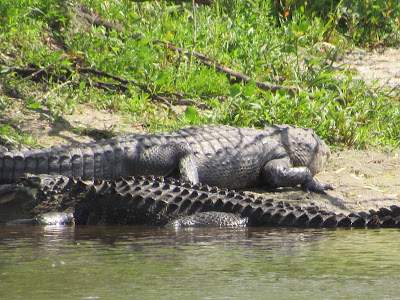 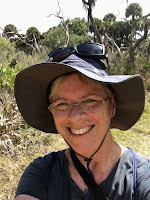 It was quite the letdown....Sparky only counted about 55 gators. There could have been more, they were all tangled up in each other. While she wanted to walk around the outskirts of the pond to get just a tiny bit closer with her lens, there were two BIG gators swimming in the pond, heading her way. Sparky could tell they were very interested in what she was doing. Being the SOLE hiker at that moment at the Deep Hole, with no one ever joining her in the half hour she was there, Sparky backed
off to the mound of rushes in front of the pond and stood behind them. The gators kept coming. At that point, Sparky decided it was dumb to be at the Deep Hole, by herself, and that wanting to get better pictures was a bad idea. So, with an eye on the two gators that were swimming to the edge of the hole towards her, she headed for the return trail 2.5 mile hike, disappointed that there weren't more gators, and that she couldn't have gotten better photos for the day. Mid day is a terrible time to take photos, you've got that glare from the sun on everything. 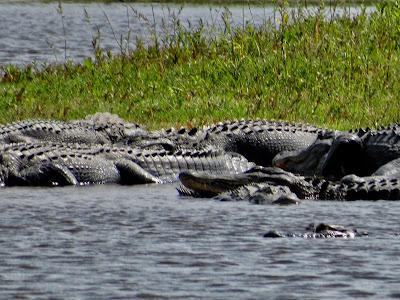 The only birds she spotted was a great blue heron at the hole, and the usual egrets fishing at the pond with the gators. 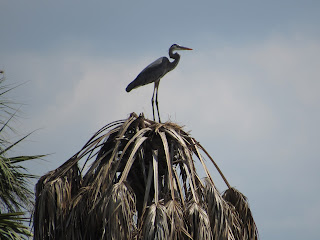 Sparky would like to do the Deep Hole again, but thinks she might want to come in by kayak. The only problem with Myakka River State Park is, that sometimes the water levels are so low, you can't kayak back there. There has been a drought in Florida this spring, so water levels are extremely low at the park. Right now the boat ramp is closed, and there are no airboat tours because of the drought. It's going to take a LOT of rain for the park to recover.

Sparky has seen videos on Youtube about kayaking to the deep hole, and you are REALLY close to the gators if you can navigate your way back there. It just goes to show, with nature, you never know what you are going to see. Sparky was happy she did the hike, but recommends that you go EARLY in the morning to avoid the heat. Wear proper shoes, bring plenty of water, clean your camera lens and BRING A FRIEND.  :-) 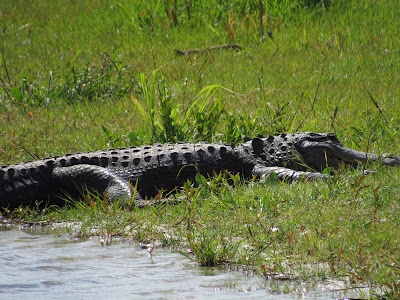 A Jungle in the Middle of Sarasota

Eldo and Sparky had a visit this past month from Eldo's daughter and grandson...We decided to go visit Sarasota's Jungle Gardens while they were here. Sparky had always wanted to go, but thought it was your typical tourist trap, dated, and not all that interesting. Today, she decided to check it out with family to see if her perceptions were accurate, and was glad she did! It's a cool place!

Although it has been open since 1939, Sarasota Jungle Gardens has been updated and refreshed to stay current. It has a wonderful, jungle like atmosphere--10 acres of lush tropical landscaping, free roaming flamingoes, a gift shop, a playground, and a cafe. The paver walkways are beautifully landscaped with over 3,000 different species of trees and shrubs. There are rustic little bridges over lagoons so the scenery is gorgeous as you walk along the paths thru the gardens.

There are mini shows on the premises that last about 20 minutes and they are very entertaining, funny, and informative. There is a reptile show, a jungle bird show, and a wildlife wonder show. You can stop by after the shows and pet or hold birds, snakes, reptiles or alligators and lizards.  Ewwwww.....no thank you! says Sparky. But somebody would love that!

Semi private walkabout tours are available besides the usual walk through, and there are events and promotions going on all year.  Current price of admission in spring 2017 was 17.99 for adults, children 4-16 was 12.99. Hours are 10-5 PM daily. the parking lot is small and fills up fast, but you can park across the street in overfill parking at a church across the street.

Sparky LOVED the jungle birds and the flamingoes. 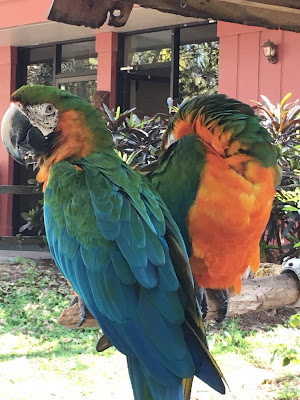 She always thought flamingoes were kind of ugly in photos, but once you see them in person, they are one of the coolest looking birds! 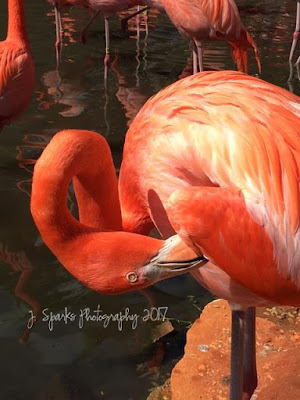 You can walk right up to them and feed them at the Jungle Gardens. Some of the parents were not closely supervising the feeding, and at one point a small child got pecked by the bird's beak, and started to cry. There was one other instance where a little toddler was scared to death by a flamingo walking up to him. The look of terror on his face made the adults laugh, but seeing a tall flamingo walk up to you as a two year old would be a very terrifying experience! 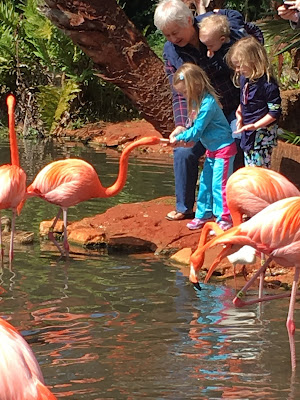 This little kid was trying to see into one of the pond areas where turtles were walking around....It's a great place to take your children or grandchildren. It really wasn't all that cold out, but maybe this is to a little local guy from FL. Sixties is very cool to Florida natives, lol. 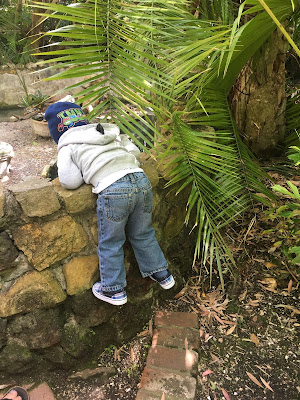 You see all kinds of wildlife here in the gardens, some intentionally displayed and some not. This was an unusual looking spider to us, and it just happened to be on a web between some trees as we were walking..... 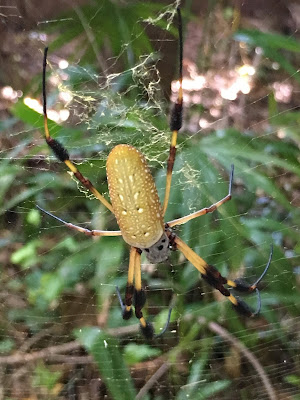 Overall, it was a wonderful experience to be at the Sarasota Jungle Gardens today...We highly recommend visiting this marvelous place, and Eldo's 11 year old grandson thoroughly enjoyed it, as did his mom and Sparky.