The Celery Fields in Sarasota

A quiet weekend...Most of the time we spent either looking at more houses and subdivisions, some being in the Parade of Homes that's going on in Sarasota this week, or relaxing back at the rig. After having an early supper at the Der Dutchman Amish Restaurant on Bahia Vista Road in Sarasota, wonderful as always, we decided to explore the Fruitville Road area some more. By the way, if you visit Der Dutchman, one of THE BEST, freshest buffets of Amish style cooking we've ever had, be sure to go before 4:00 PM. The line starts out the door around 4:00 PM. If you don't mind waiting, you can rock on the front porch until your turn to be seated. 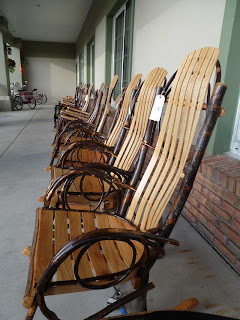 After this wonderful meal, we spent some time yesterday over at the Celery Fields just behind the Fruitville Road Sarasota Library Branch. There's a wonderful park over there, a place to walk or bike on some gravel trails, a beautiful gazebo boardwalk, and an observation mound to climb. We had heard that roseate spoonbills could be seen there some times. Sparky jumped at the chance to go looking for some. They are one of her most favorite birds. Eldy sat at the gazebo for a bit while Sparky scanned for unusual birds or gators. (Plenty of gator signs are at the park). No gators, no spoonbills today.... 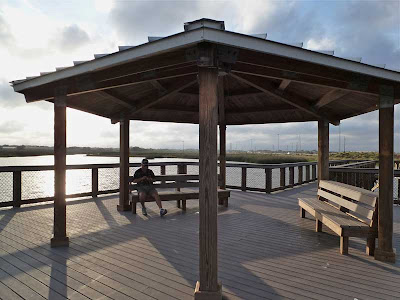 This couple was using the mound to train for some kind of hike, we think. Up and down, up and down they went and around several times while we were there. Sparky was going to climb to the top to see what kind of view there was, but decided to do it another day. Just watching this couple wore her out! 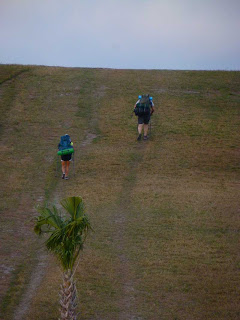 The celery fields were producing big yields back in the 1920's. Now the fields are part of a big (300 acres) watershed project that helps control storm water runoff. The Celery Fields are the county's biggest primary storm water collection zone. There's an amazing number of species of birds here--over 200! Sparky was reading the board about some of the birds you see there, and a limpkin was one of them, along with bald eagles. We see an occasional limp kin just outside our park in the drainage ditch when we drive back and forth on Fruitville Road. We didn't know what they were until we read the board at Celery Fields.
The county has restored over 100 acres of wetlands, making this area a wonderful place to bird watch. More than 20,000 aquatic plants and trees have been planted. There are marshes, deep ponds, and canals, all a part of the water system. It is just beautiful!

On the way home, Sparky glanced out the window just as we were coming around the back side of the celery fields, when she saw what looked like a bald eagle. It was! This was the first bald eagle sighting rather close up that Sparky has seen! Woo-hoo! She thinks it's rather unusual that he (?) was on the ground. Since his head wasn't totally white, she thinks it was an immature bald eagle? Why is it always the case when Sparky sees something really cool in nature, she doesn't have her SLR camera with her but her dinky little point and shoot???? 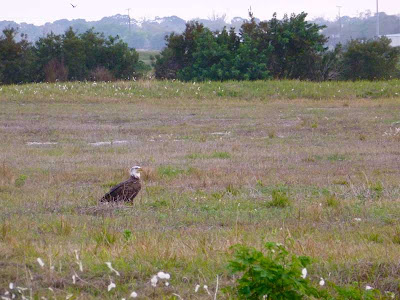 This is the best she could do, as he took off after we started driving around the little road coming closer to him. 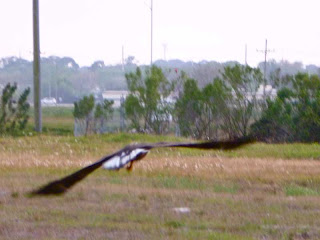 Wow! What a wingspan!

We really enjoyed our visit to the Celery Fields today, it's just a hop, skip and a jump from Sun 'n' Fun to get there. It would be a great bike ride excursion, and Sparky will probably try that one day next week.