We're back to the really warm temperatures again...That's ok as long as the beach is nearby, there's a pool or something to keep cool! Sparky and Eldy headed to Caspersen and Venice Beach this afternoon to look for shark's teeth again. That's supposed to be a couple of the best places to find them in the area.
If you are REALLY lucky, or have diving or snorkeling gear, you can go further out the shore line and perhaps find a MEGALODON tooth... a prehistoric shark's tooth. They are BIG, REALLY big teeth.
Here's an idea of just how big the ancestors of today's sharks were....
It would be nice to find a regular shark's tooh, just one, but for some reason, Sparky was not able to find one today. She didn't have a strainer or special gadget net to help sift the sand. There's only so long you can stoop over and over without your back bothering you without using one of those long handled sifter/rakes everybody uses. Here's a newer design called the Susick Sea Shell Sifter. Say THAT ten times really fast! Maybe Sparky will get one for next year when we come back next December. Twenty-two bucks isn't too bad, but there are cheaper ones out there. Sparky would like to find some sea glass as well as shark's teeth. Sea glass is getting harder and harder to find according to local shops that sell jewelry pieces made from it. 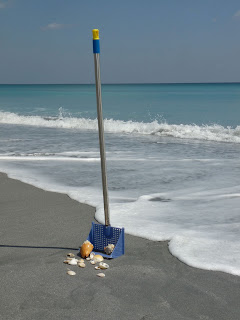 After an afternoon of sea shell, shark's teeth hunting, it's customary to head to Sharky's on the Pier, the only restaurant on a pier in Venice, FL. We were in for a special treat today...We met Pam and Vic Matthews, fellow bloggers that write Travelin' in the Big EZ at Sharky's for supper.
Sharky's has great atmosphere as it's right on the beach. They are in the middle of expanding the restaurant so it's a little congested at the moment and restroom facilities are not quite up to snuff. But you can check out the menu here:
Sharkey's menu

Pam and Vic also have a Phaeton, so we traded stories about all kinds of mishaps, adventures, silly stuff and important stuff like tips on dealing with the things on our rigs. We hit it off with them right off the bat, and it wasn't long before Eldy and Vic were talking baseball and making plans to get together soon to attend some spring training games. Pam and Sparky have LOTS in common, both being outgoing, chatty, retired teachers and both like to kayak. Eldy and Vic couldn't get a word in edgewise between the gals, so they had to turn to sports to get their own conversation in.  :-)
And here we are, having a GREAT time!
We really enjoyed meeting them and hope to spend some time with them again before we both head out in different directions in April....Thanks for driving to meet us, guys!