We are sort of taking it easy these past few days...Not going anywhere, really, other than errands. Sparky is doing her best not to make almost daily trips to Michaels craft store and the biggest Joann Fabrics store she has ever seen which just happens to be located one exit north of Fruitville at University Center and which she is able to navigate to and from by herself without getting lost. Mighty tempting! 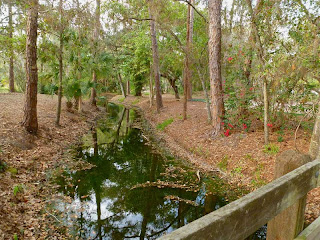 Today we revisited Lakeview Park, which happens to have the highest rated disc golf course in Sarasota, a 3.5 difficulty course out of a possible 5 points. Probably for all the water hazards that are present on almost every hole. Did we play? Nope! Sparky just wanted to get some more long needles for her pine needle baskets. 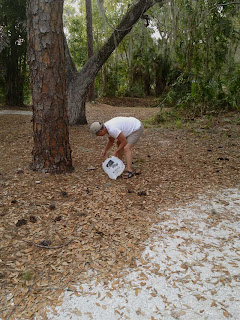 Now the easiest way to do this would be to just scoop up armfuls of needles, shove them into a bag, and then come home and sort through them, saving a WHOLE lotta time. Does Sparky do that? Naw, she does things the hard way...She picks up the needle clusters one by one, measures how long they are and places them into her bag. She LOOKS like she's using drugs here, but she's just using her elbow to wrist to measure the needles! 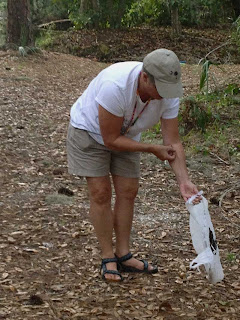 Is this one too short? Does that one have a lot of mold spores on it? Are they long or longer than from her elbow to the middle of her hand--11 inches? There's a reason Sparky doesn't pick them up by the handfuls and shove them into a bag. There's TONS of Spanish moss, also known as long moss or "graybeard" mixed in with the needles that have fallen from the trees. The official name for all that hanging moss is EPIPHYTES. Who wants to say that? :-)  Sparky read that you don't want to handle the moss/epiphytes that are on the ground because they likely contain CHIGGERS---little blood sucking bugs that burrow into your skin and cause intense itching. UGH! By the way, should you get them, you take a cloth dipped in Listerine and wipe all your itchy spots. That's supposed to really help!  So Sparky continued to search one by one as Eldo patiently watched and wondered why the heck she didn't just pick them up by bunches. Now he knows....(I'm bringing gloves for Sparky for next time, says E.)

As Sparky was picking up needles, she saw something BIG fly nearby and saw this bird alight in a tree up above where the nest was. Maybe some kind of hawk? 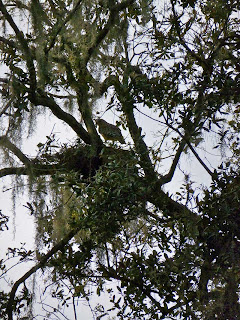 We love this park, it's so beautiful. We will definitely come back for another round of disc golf. We were lucky the first time we were here, and didn't lose any discs, but we better come prepared with extras the next time.