Some people would not find the beauty in a rainy day...We think rainy days are awesome! First of all, you don't get that many in southwestern Florida. We've had a few sprinkles here and there, an eighth of an inch here and there, but it passes over so quickly, you forget that you had any rain at all during the day, the sun comes back out so fast. 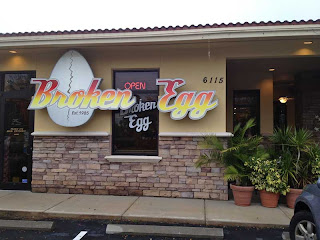 We had a very steady rain late this morning. Eldy likes to sit out outside under the awning and both listen and watch the rain come down. Sparky does, too, if she sits long enough. But, as it was, Sparky crafted and Eldo researched places to go looking at model homes for fun on this very rainy day.....But first, it's very important that you eat a good breakfast before starting out your day, right? How about this breakfast at the Broken Egg restaurant in the Lakewood Ranch community, where Dick Vitale, announcer for ESPN basketball, hangs out when he's not announcing?


It may not be very good for you, but it tasted GREAT! Hey, there are lots of green peppers in the colorful potatoes. 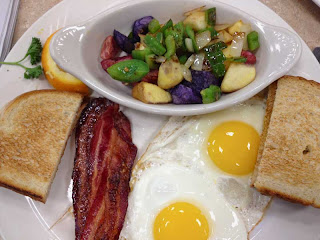 He wasn't there today but lots of his fundraising stuff for pediatric cancer was.... 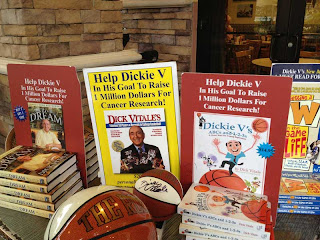 After breakfast, we went looking for places to look at....We found a few.....We went to an area called River Strand in Heritage Harbor, a development made up of several subdivisions in Bradenton. The models were unremarkable today, but the wildlife and the grounds of Heritage Harbor WERE remarkable!

While Eldo waited for a salesperson to give us some information, Sparky looked out the back lanai and saw 1) two squadrons of white pelicans --yep, one of several names for a big flock of these birds.....hmm-m-m-m-m, does that make it a platoon?  At least 5 great blue herons, a pair of woodstorks and a bazillion ducks, and lots of anhingas or cormorants sunning themselves. WOW! She wants to live here! Right here in this end condo unit. No such luck, Sparky...it's the builder's model/office and it's already sold. No wonder, you had your own  semi-private golf course view with an estuary/bird sanctuary right outside your door!
Does the pose of the wood stork standing on one leg remind you of anything? 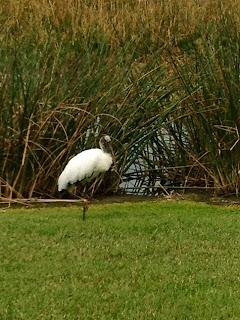 Eldo says it reminds him of Sparky's water exercise stretch where she has to grab her ankle behind her and the exercise leader yells out, "POSE"...which means hold that stretch for a bit.....Sparky was actually standing on one leg with the knee tucked under just like the stork, only the pool current caught her off balance and she's starting to float away! 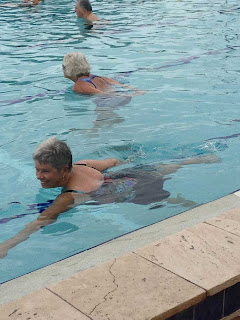 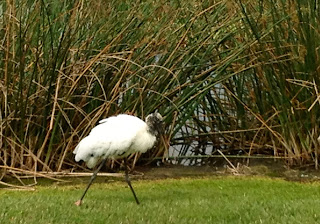 Did Sparky have her camera? NO-O-O-o-o-o-o.....Wahhhhhhnnnnhhhh! Just a few cell phone photos...sigh! Then we saw some Florida sandhill cranes at the development's park called Central Park. 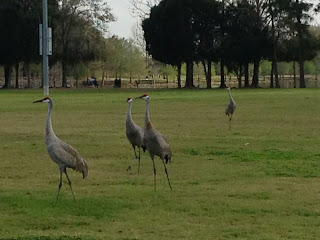 Beaucoup birds today....Love it! Had fun looking around at the different neighborhoods, and then got to see a lot of nature too. A beautiful rainy day it was, and then the sun came out for the rest of the day!
Posted by Jeannie and Eldy at 11:41 PM