Sparky has been VERY busy subbing in first grade this past month. As a matter of fact, she hasn't missed a day of school yet in first grade. The first teacher had surgery, so Sparky opened up the classroom for her. Then, while finishing up that assignment, another first grade teacher at the same school, tripped backwards over a family pet, and broke bones right around her elbow. Ouch! Sparky was in for another two weeks!

The kids are delightful....Sparky has been posting little stories on Facebook, but for anyone who has missed those, here's a couple for you....After taking an oral reading screening test about babies and what babies do, a little boy had a puzzled look for a moment and then asked, "I wonder why babies cry so much?" He pondered that and before I could answer, he replied, "Maybe it's because they poop so much!" Indeed.....

Another day we were outside and it started to rain....The kids immediately wanted to know if we were going inside. Now, when you have first grade, we try to get the kids outside 90% of the time because we really DON'T want indoor recess for a myriad of reasons. So, even if it's raining lightly, we remain outside unless it's a thunderstorm warning. The kids have a nice big cover over the playground so they can stay dry if they really want. But most of them really enjoy the rain. It's the worriers that want to go in. It was just lightly sprinkling. "Mrs. Sparks, are we going inside? It's raining."

"No, we're going to stay out...."  It started to rain a little harder..."Mrs. Sparkles, it's raining. Are we going inside?"  "Why, are you melting?"  "No..." with a grin. "Then go ahead and play. You're ok!" And off they went, running around in circles and screaming and yelling like you've never seen. One little girl, running around, held her arms up high and yelled, "I just LOVE it when it rains!"

Off to Anna Maria Island this morning for breakfast....Then we went over to the Anna Maria Island City Pier. We hadn't been there in three months...Too hot, too rainy, too steamy...Still hot, still steamy, but we thought we'd go see what there was to see. Apparently, it's a good time to see dolphins! A pod of dolphins swimming up close and personal right up to the pier. 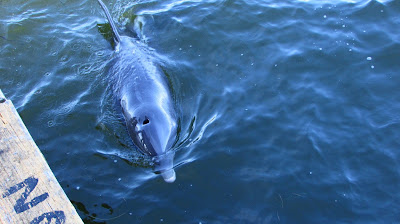 They were chasing the fishermen's bait, grabbing Spanish mackerel right off their hooks when they could! 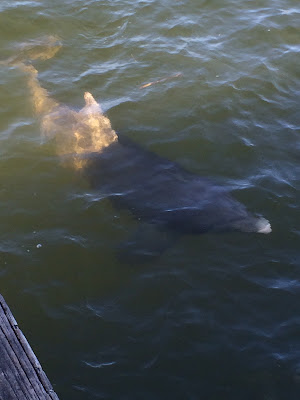 At one point, we saw a cormorant with a fish and a dolphin circling it.... Uh-oh! 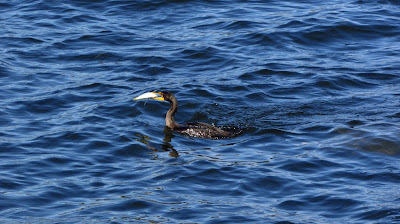 The dolphin swam right up under the cormorant, you can't see him here but he's right there. They proceeded to have a little tussle with the fish, the dolphin grabbing it right out of the cormorant's mouth and swallowing it!  Eldy saw another dolphin grab ahold of a fisherman's baited hook and make a run for it. He let the line run out for a bit, not wanting to hook the dolphin, and then finally, he said the heck with it, he didn't want to lose his entire line. As he started to reel the line in carefully, the dolphin grabbed the fish off the hook and made off with it.

This is the most dolphin we have ever seen at the city pier. Usually, it's just a solitary one hanging around and they are usually much further out. But the mackerel are plentiful right now. One of the fishermen said that the dolphins have been very active and very present the last two days, and that September and October are great months to see a lot of dolphin and fish activity at the pier. Woo hoo!

Lots of people fishing today, even some young ones...We love to see them with their dads, (usually)...A great family activity for sure! 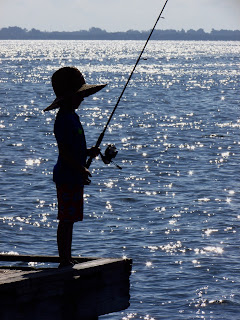 A wonderful morning...breakfast on the beach, dolphins at the pier, and stories to share....It's a great life here in Bradenton, FL! Even if it is too hot and steamy for Sparky some times!
Posted by Jeannie and Eldy at 7:35 PM 3 comments: