We're still coughing now and then...Can't be red tide, can it? We're too far from the ocean! About 30 minutes. Offshore winds should be keeping any red tide respiratory distress at bay and out at the ocean beaches..But we've been to Longboat Key Beach yesterday and the red tide bloom, as they call it, has been responsible for the collection of 12.4 TONS of dead fish washed up on the south end of the Key to the 4000 block of Gulf of Mexico Drive, right where we biked yesterday. That fish collection occurred in the past few weeks.

In case you wanted to know and missed the previous blog on red tide, here's a little info about it...Red tide is a higher than normal concentration of a microscopic plant like organism. It can cause respiratory distress in SOME individuals, if you are susceptible to respiratory ailments--coughs, cold, have sensitive lungs, etc. If you are sensitive to red tide, you might have trouble with sneezing, watery eyes, scratchy, itchy throat and COUGHING. The most common species that causes the fish to die off and respiratory distress in humans and pets is Karenia Brevis or K. Brevis.

The Mote Marine Laboratory and Aquarium here in Sarasota continuously monitors and reports red tide  conditions updated twice a day, 7 days a week, 365 days a year through a daily sampling of water from 26 Gulf Coast beaches. Water samples are taken from the beaches, from boats near shore and offshore, and with the help of local resources like the Florida Fish and Wildlife Conservation.  It's quite a sophisticated operation. Mote Marine Laboratory even has an underwater vehicle called an AUV--which is an underwater robot or autonomous underwater vehicle. Theirs is named "Waldo". (Too bad it's not called Eldo! Wouldn't that be cool? asks E.) The AUV's have special red tide detectors called BreveBusters. Clever name, eh?

Mote Marine Laboratory developed the Beach Condition Reports that give you the red tide, fish kill, rip current information (for lifeguarded beaches) for 26 Gulf Coast Florida beaches. In Sarasota County, the beach information is listed for: Lido Key, Siesta Key, Nokomis, Venice North Jetty, Venice Beach, and Manasota Beach. You can also call 941-BEACHES to get a report over the phone.

If you look online, the Beach Condition Report shows a Google map with little balloon pins for beach destinations. Click on the gulf coast beach of your choice, and up pops a report!  Things reported are: dead fish, respiratory problems, water color, wind direction, location of red drift, red tide present or not, rip currents, and color of the beach flag flying. Green is great-low hazard, yellow is moderate surf, red is high surf, strong currents, purple is dangerous marine life. Surf conditions and surf height are also listed. Good to know....We've heard of beach goers having trouble with coughing and their dogs coughing as well over at Casperson Beach south of Venice, FL last week.

So-o-o-o-o...is it red tide? Nope! No red tide present this week, it's the coughin' crud that still hangs on, our third week into it...But it's only a very occasional tickle and a certain something eaten that sets off a coughing attack. Like when Sparky went to the grocery store a couple of days ago, and sampled a piece of peppered salami....The pepper INSTANTLY set off a severe coughing jag, like the kind where you think you are going to cough your insides to the outside. Sparky practically ran to the rear of the store trying to find a drinking fountain amidst stares from other customers.."What is WRONG with THAT woman?" Water found, coughing subsided, and Sparky left the store as quickly as possible!

Not much else happening lately...A trip to Millie's Restaurant for breakfast one morning...WONDERFUL food, seniors love it, it's one of the best breakfast places in Sarasota, get there early on a Sunday morning, before 9:00 to get a table right away..Very classy decor, like eating in the dining room of a nice, country style decorated home..We've eaten there several times, it's highly rated on YELP...Sparky loves the breakfast burrito, Eldo loves the biscuits and gravy....YUM! 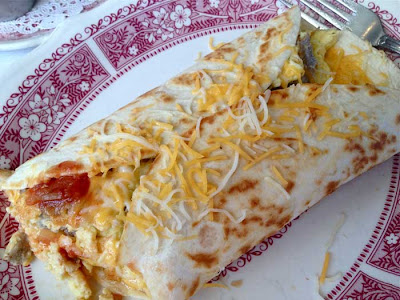 And the weather just keeps on staying sunny and warm....Guess the tourism industry in Florida is booming this year with rentals of vacation units both here in the park and in Sarasota County way up this year. Record numbers of Amish and Mennonite populations are coming down to the Sarasota area as well. Sounds like a great year for the realtors!  Until next time......