Where Did the Day Go?

This morning, Sparky was off to swim exercise class...Over 90 (!)  people in the pool this morning for styrofoam bar bell exercises, leg exercises, stomach crunches, and stretches at the end, all done in the water....On Saturday mornings, they offer a more strenuous water exercise class with pool noodles and resistance bands. And Sparky thought noodles were just for lounging around in the pool! She's gonna check that out this Saturday AM. 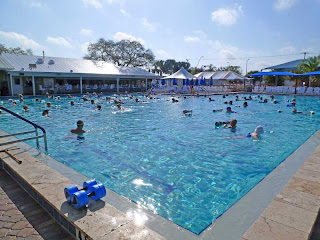 At the end of class, some people were staring skyward...everybody looked up and there were TWO bald eagles in a circular soaring pattern over the pool. Sparky happened to have her point and shoot with her and caught one, but the photo is a little blurry...Still, ALWAYS a thrill to see them! 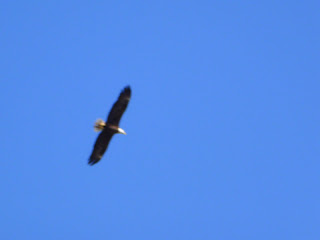 Sparky read that water creates about 12-14% more resistance when you exercise, but her stomach isn't getting any flatter! (Well, THAT is because....I'm gonna be quiet now before I get myself in trouble, says E.) Peanut M & M's anyone? :-)   Eldo got HIS exercise today---30 minutes around the park on his bike.

We found out today that the Rusty Spokes Bike Club at Sun 'n' Fun is no more....the organizer said that after talking to a lawyer and general management at the resort, that lawsuit happy people would be the first to go after him if something happened. Last week two people had minor accidents before we ever got out on the trail, and not everyone chooses to wear a helmet when they ride. Tch! tch!  It's a shame the club is no more, Sparky met some wonderful people on the last two bike rides. But, the gentleman stopped by today to explain why he can't continue to be the organizer, so we tried to dream up ways to get a group going on the same ride at the same time without it being "organized"...Sparky suggested a chain email from just one person to another, you know, sort of like that old "telephone line" game we use to play, only email a trail time and place and spread the word one by one? But he really didn't want be in on anything organized, so we'll just ask him for ideas and then see if a couple of new bike friends or two would like to go with us....Guess after talking to a lawyer and the GM here at the park, it scared the pants off him!

We talked to an elderly neighbor for awhile, in his eighties, that has been coming to the park since the '40's! He has a park model right behind our side, and is from Ohio. Eldo and he talked up a storm for awhile. Eldo rocked in his rocking chair for awhile and plotted and planned numbers in his head about where we are headed next.  :-) If you ever see Eldo rocking, it might look like he isn't doing anything, but his mind is going a million miles an hour! :-)

And the latest news and counts from the python hunt that just ended is....TADA!  FIFTY pythons taken in the hunt down in the Everglades, and two young guys in their twenties, temporarily lost and suffering from heat exhaustion and dehydration, but they were found. Guess the promoters were hoping for a much larger harvest of pythons. Apparently, the pythons are extremely well camouflaged with their coloring for the Everglades....That's unfortunate!

Sparky worked on some crafts.....and attempted a recipe for supper. She is not going to share it except to say it involves hot dogs, corn, and corn bread muffin mix made like muffins. Not the healthiest entree in the world, but we did use turkey hot dogs with no nitrites or nitrates. Hey, for a gal who hates to cook, it's a start! And hey, if it appeals to someone, Sparky will share it after all.  :-)

Sparky went off to play pickleball this evening with the ladies... An hour and a half later and four games under her belt, she was ready to call it a day!

And one last note about our forays out into the neighborhoods of Sarasota...Eldy researches major purchases for YEARS before buying anything. We'll still be RVing for years to come..It just gives him something to do! It took him seven years of looking at RV's before he finally bought one. So, no worries...we're still fulltimers and will be for a LONG time!

See you tomorrow, everyone!
Posted by Jeannie and Eldy at 11:07 PM