We opted to take advantage of a Groupon coupon for a dolphin sunset cruise, 24.00 for TWO people! Good deal! Normal price was 25.00 a person.....We managed to get onboard for New Year's Eve, a great way to say goodbye to 2011...An hour and a half cruise along Sanibel Island and Pine Island. No food on board, just a soda pop and a beautiful view. 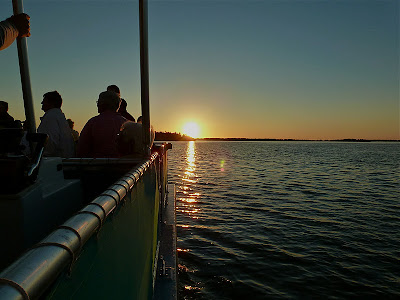 After taking the cruise, we wouldn't recommend it for the original cost. For only an hour and a half, short straight trip out and back between the islands, very little narration, just cruisin' mostly, it seemed like too much money. But for the great Groupon offer, we thought it was worth it. It's sponsored by the Adventures in Paradise  company, and the boat tours leave out of Port Sanibel Marina. We've learned you can't expect the dolphins in the wake of the boat show despite what the brochures show you. With nature, you never know what you are going to see. It's a matter of getting lucky! (Ahem!) Sometimes this tour sees manatees, (we saw one in the distance), sometimes the dolphins are extremely active, up close and personal, other times distant and moody, like a teenager! Got a fin photo, that's it! 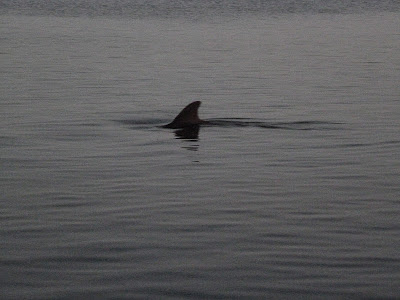 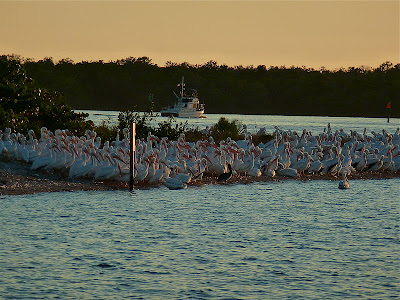 What did we see? We saw the largest colony of white pelicans that we have seen on our Florida travels. They were an interesting lot. They were lined up like a bunch of theater goers at a movie premiere. They stood in line silently, all facing the same way into the sunset, then gradually shuffled their way forward towards the end of the land strip to move into the water, the ones in back patiently waiting for the line to move forward! There were several hundred of these big white birds, the second largest bird in the continental U.S. I didn't know that! There were a couple of brown pelicans in the bunch, and they were dwarfs compared to the huge white pelicans! 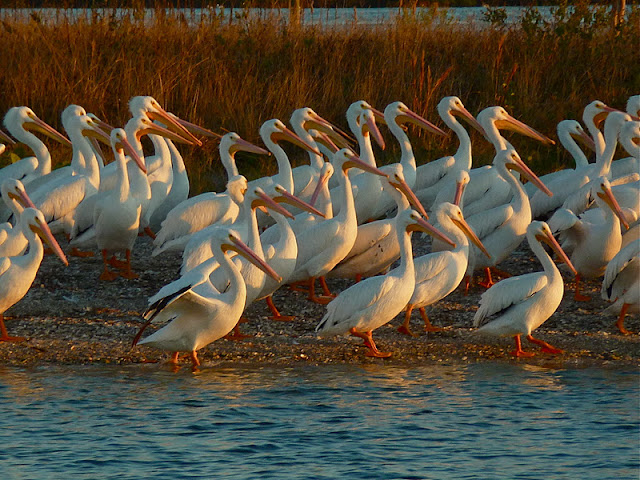 There was no wind, the skies were clear, the temps were mild. That part was WONDERFUL! 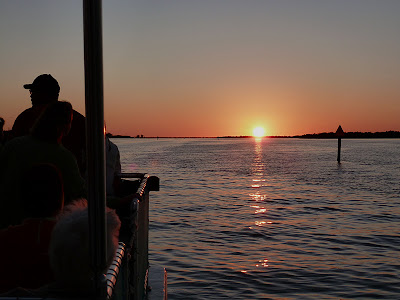 The young captain (28 years old!) tried his best to find a pod of dolphins, but our luck was not with us this evening. We were disappointed because although the world's largest resident dolphin population lives here in the Sanibel/Captiva/Pine Island area, we saw few dolphins. We saw a pair here and there in the distance, but they were very elusive. Eventually, a pair did come closer to the boat, but slipped away very quickly and with the night light closing out the window of the perfect photo opp, we settled in to watch what we could still see with the naked eye and enjoyed the beautiful sunset. 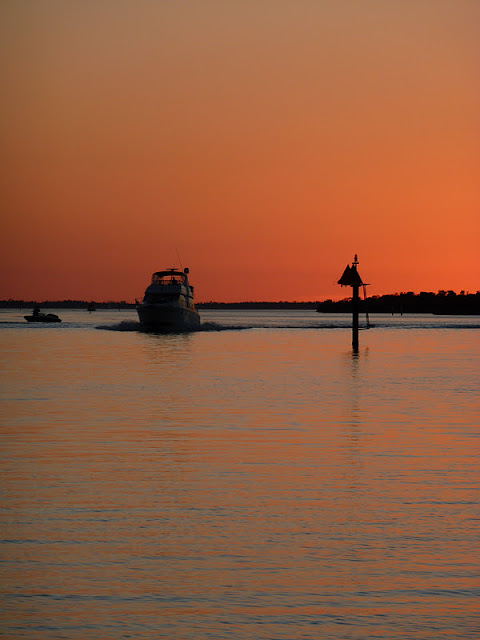 After we got off the boat, we knew it would be almost impossible to find a dinner reservation back in Fort Myers or Naples, so we took our chances at the Lighthouse Restaurant, right there at the Port Sanibel marina. It was FABULOUS! A moderately priced restaurant, about what you'd expect to pay for a good meal at a very nice restaurant on New Year's Eve...The food was expertly prepared, steak done just the way Sparky likes it (EXTRA rare), Eldo's  BBQ ribs fell off the bone with mouth watering Jack Daniels flavor, everything was perfect down to the sauteed veggies and creme brulee for dessert. Delicious! That's all Sparky needed for a wonderful New Year's Eve celebration.... 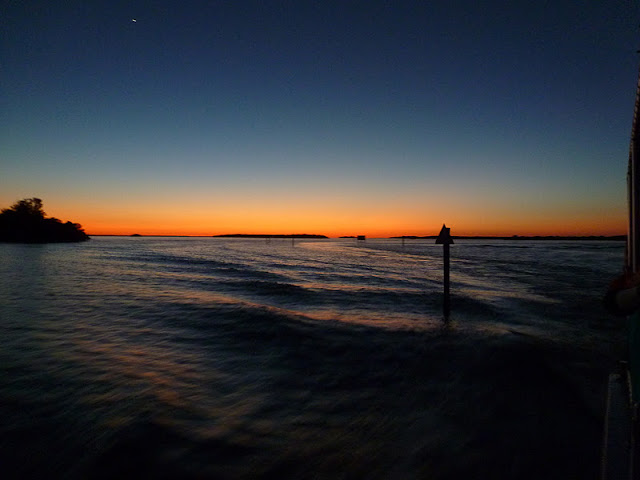