I've been waiting three weeks to get approval to go volunteer at the school, and the word came through...."You are good to go at the Webster Elementary School. You start tomorrow." Yay! If you are hoping for photos of the little darlings I got to work with today, there aren't any because of much more strict privacy laws about taking children's photos today. The best I can do is a photo of the front entrance where the school is undergoing some construction. It's a much older building, so I was sorry to hear it's for administrative offices and not improvements to the individual classrooms. 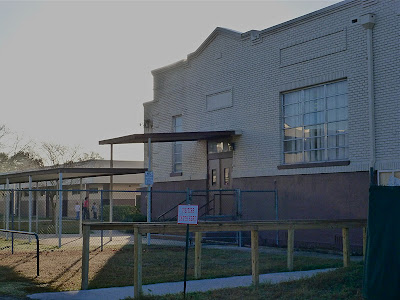 I am assigned to a group of very young children with special needs, around the age of four and five or so. They are in a pre-kindergarten class, but below ability level for their age and have been identified as having special needs. There was an autistic child in the group, some behaviorally disordered kids, and some very emotionally immature children. These are the same kinds of kids I worked with in middle school my last seven years only they had bigger bodies! I was excited to be able to spend some time with much younger kids, as that is one of my favorite age groups and I was curious what their developmental stages were at this age.

I worked from 8:15 today until 11:15, and by the time I was done, I was exhausted! I originally planned to work two days a week, but decided once a week for three hours is probably all I can handle....Here's how it went...names have been changed to protect the kids' privacy....We started out with breakfast. Two kids cried because they got "hit" in line, one refused to eat anything at all, and it took three adults to keep them in line without hitting each other and running all over the place. We simply had to walk to the lunchroom, eat and head back to their classroom to start their day, no small feat. I did my best to engage them and teach them SOMETHING!

"OK, everyone, let's work on the letter K today...What letter is this? K...Everybody repeat after me--K. Let's make a big K in the air! Watch me, Billy. Get out from under the table, Billy. Get back in your chair please. Johnny, we don't hit each other, keep your hands to yourself. Now if everybody can sit their butts in their chairs and look ready to learn, you can get a sticker! You don't want a sticker, Mary? You don't want it on your hand? Don't cry, it will be ok...Bobby, you can't hit Billy, that's not nice. Let's make a kicking K! Let's make the kicking K on your paper, don't kick your neighbor. (Bad choice of words, Sparky!) Don't I know it!

I proceeded for the next half hour to attempt to get the kids to trace the letter K, to stop crawling under the table, to get them to listen and talk about things that start with K, to play a guessing game which only one student participated, tried to get them to trace their names and the others either hit each other, scribbled on the table and not on their papers, got up and ran around the room, or crawled under the table multiple times. Not to mention the number of times everybody had to pee and I had to check to make sure they didn't get lost in the bathroom or forget to come out.

Luckily, a break came about half way through and we went outside for recess. They did not play well together, but some of the boys bonded with me as I helped them make their way swinging across the rings. That was something new for them. "My turn, MY TURN!"  Back into the classroom we went. You know you are making progress at making a connection with the kids when one of them sitting right next to me says, "You stink!" I said, "Yep, that's what happens when you go outside and play when it's hot and you come back in. Next time I'll have to remember to put on deodorant!" (You REALLY didn't say that, did you? asks an incredulous E.) Yep, I did! I don't think the little guy knew what I was meant about deodorant because he told me two more times, "you stink!" At the end of my helping session, I was ready to leave, the teacher said to the kids to "say goodbye to Miss Jeannie" and one of the orneriest boys planted himself in front of the exit door and wailed, "NO-O-O-O-O! YOU CAN'T GO!"

I thought about all the different ways I could possibly do this differently next time on my way home. Never having taught preschoolers, I thought about ways to get them more physically moving in a GOOD way, about rhymes and other things to learn their ABC's and how I might be able to get them to pay attention. Developmentally, most of them are not ready for the letters. Developmentally, most of them are not ready for school, period! The teacher knows that, but she is trying to get them ready for kindergarten, that's her job and these kids are WAY behind already. You just have to jump in, do a lot of praying, work your butt off, and hope you can get through to some of the kids. She doesn't even get a lunch with the other teachers because she doesn't have someone to come in and take her place with the eight kids. Even with a program assistant, there's not enough hands to keep the little ones' hands off each other.

Today was an eye opener and a reminder of why I retired from special education at the age of 60 instead of waiting longer....I was ready, after 34 years of always working with special education kids, to retire. I read somewhere that the average burnout rate for special ed teachers is at about 7 years, so I look back and feel pretty proud that I lasted that long!  But I'm not finished with education, I still hope to work in the classroom when I can. I admire anybody who goes into the field of education today, it's a tremendous challenge and an arduous task to educate kids coming into a "regular" classroom with a much more wider ability, IQ range and LOTS more problems. I salute my teacher friends who are still working hard to make things right in an educational system that needs an extensive overhaul and reworking to reflect modern society. The teachers that I know are really trying, folks! They really are!

I'll be back next week at Webster Elementary, and I'll be sure I've put on deodorant next time!
Posted by Jeannie and Eldy at 11:30 PM

Email ThisBlogThis!Share to TwitterShare to FacebookShare to Pinterest
Labels: volunteering at the local school