I Need a Crystal Ball? 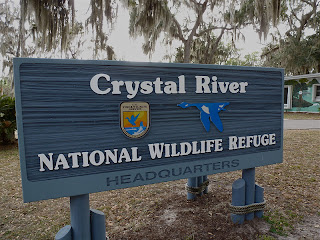 To know where the manatees are.....because we didn't see any at the few locations on the Crystal River where they are normally seen! But that's probably because we weren't out ON the river....We took an exploratory drive to the Crystal River area today and saw lots of different things....lots of kayakers out looking for manatees, we saw the Crystal River Wildlife Refuge Center, one of the places you can usually see manatees.....But not today...we talked to another guy at a kayaking place, and he said they are all over the place due to the recent cold weather. They have definitely moved inland.

We scanned the area looking for kayaking opportunities and found different package prices for tours and individuals in the area giving tours. My mind is spinning at the moment because I'm getting ready to fly to Detroit to see my sister in two days! So until I decide when and where I might like to kayak, I'm not sure about which one to do......The average ranged from 35-45.00 for three to four hours just for the rental, then a tour fee on top of that.  (Sparky better not be thinking about heading out on her own to save money! worries E.) Haven't decided yet the plan of action, so we'll see......

We also checked out an RV park called the Rockcrusher RV Park, formerly Rock Crusher Canyon RV Park in Crystal River, FL....interesting place...nice park with lots and lots of sites, with a state park or state forest feel to it. Quite a few lots didn't seem to be level...Lots of vegetation, lots of shady spots, and a beautiful screened in pool...Hm-m-m-m, Sparky immediately thought MOSQUITOES and BUGS and FLYING INSECTS.  Seriously, how many times have you seen a screened in outdoor pool? The clubhouse was very small for the size of the park, but they had LOTS of activities going on on the monthly calendar. We didn't check the ratings on it, we just drove in and drove around and out. We would definitely consider staying there..... 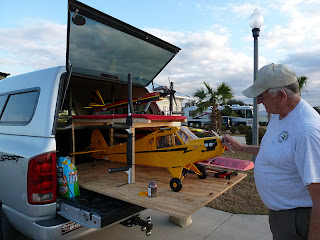 Back home we came....saw this guy with his model planes out in the driveway....Listen to me! I'm talking like we are in our neighborhood back in Indiana. But this feels like a neighborhood in a subdivision, it really does. So, I stopped to talk to him for a little bit. He just starting building model airplanes about a year and a half ago. There's a little club of guys here that are working on them.....They were really cool. He had a bigger one in the back of his truck. I asked him how much they run, and he said anywhere from under 50 bucks to upwards of thousands of dollars. He knows a guy that just spent 30,000.00 (!!!!!!) on a MODEL airplane! He said he'd be afraid of crashing the plane with one that expensive! Heck, yeah!! See, Eldy? Aren't you glad I don't have an expensive hobby like that? (And Eldy says, "How do I know how much you've been spending on craft supplies???? How much does yarn cost anyway???") Not that much...... :-) This guy had a jug of fuel sitting outside. He said it was part nitro, like 15%. Nitro, as in NITROGLYCERIN? That stuff is explosive, isn't it? But only with something to get it going..... 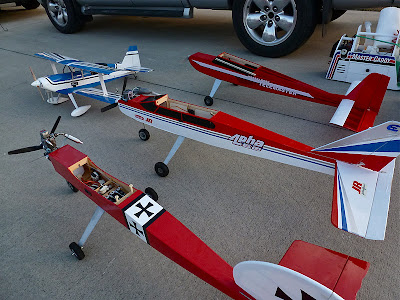 This park has lots of talented, interesting people, that's for sure!  Tomorrow, the RV show in Tampa....See you and everybody and their brother there, too!
Posted by Jeannie and Eldy at 9:53 PM

Email ThisBlogThis!Share to TwitterShare to FacebookShare to Pinterest
Labels: manatees at Crystal River?