Bet THAT got your attention!  No-o-o-o-o, SPONGE DOCKS--We're talking about a road trip to Tarpon Springs, home of the sponge docks!...Gotta love it that Eldy loves to drive....off to Tarpon Springs today..about an hour and a half drive from Webster. We had heard it was a cute little town, a Greek town with lots of history. It's home to the Greek ancestors of the sponge divers who came from the Mediterranean Sea back in the late 1800's.

There are LOTS of Greeks still living in Tarpon Springs...and where there are Greeks, there are gyros and spanakopita, and souvlaki and lots of other good stuff to eat. And where there's Greek food, there's Sparky! And Eldo, who doesn't quite share the same enthusiasm for Greek food that Sparky does. But that's ok, he enjoys watching her enjoy eating it!

We took to walking up and down the docks and looking at the ships...boats....vessels...whatever the correct term is that you call them as they go out and come back loaded with sponges. We couldn't help but wonder whether most of the world's sponges are artificially man made now, and if these boats were for tourist show. 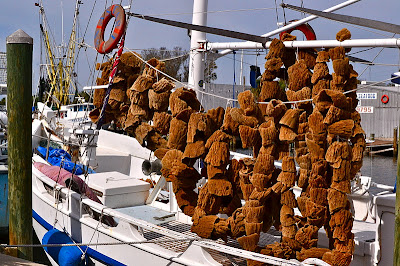 But somewhere we read that two millions dollars pours into the Tarpon Springs economy each year from the harvesting of sponges, so they are still trying to stay in business to make money.  It's got to be a dicey struggle to make a living as a sponge diver with red tide affecting the sponge beds, pollution and other man made ills and competing with cheaply made artificial sponges. 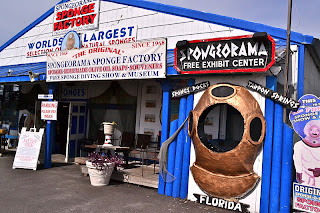 There's a little free museum there, but we didn't go in it. We DID go in a Greek bakery, and managed to come back out with ZERO delectable delights. It was hard, but Sparky was able to resist temptation, despite all the wonderful offerings in the showcase. However, Sparky was NOT able to resist an original gyros (spit roasted lamb shavings on a piece of fresh pita bread with tomatoes, tons of onions, garlic and lots of cucumber sauce) from a Greek restaurant that had been in business for 46 years. Unfortunately, the gyros wasn't as good as a King Gyros sandwich back home in Mishawaka, IN! Phooey! 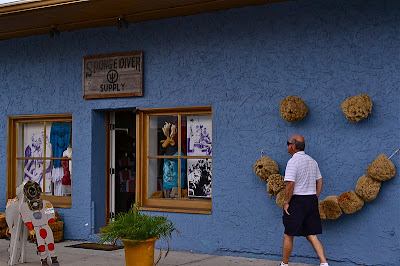 The main street with all the little tourist shops is quite short and there isn't much to the town, so once you've traversed both sides of the street, you are done! There's a great handmade soap shop called GetaGuru and Sparky fell in love with some of the soaps so she bought a sampler set to take home for 5.00. They have an online store, too. Sparky got caught up in the soap store's "eye candy" store front, it was a REALLY bright fuschia, so she just HAD to go inside.... 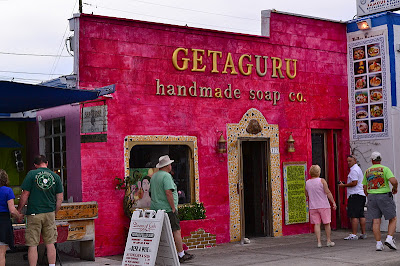 There's even a little aquarium in town, but we didn't check it out..we were just happy to browse the store fronts and the docks..... 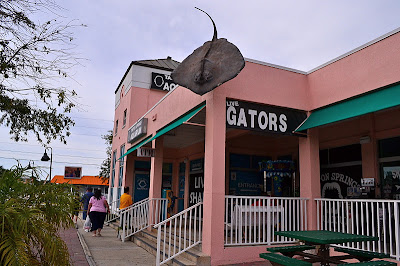 If you wanted to buy sponges right at the docks you could.... 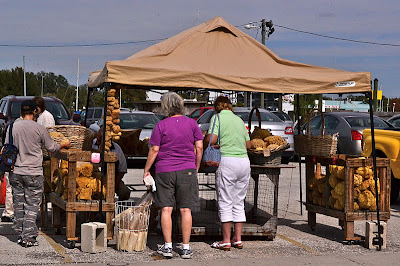 And here's a new use for some really big sponges...I thought this was a GREAT idea! Stick your potted plant in a big one and it sops up the excess water.... 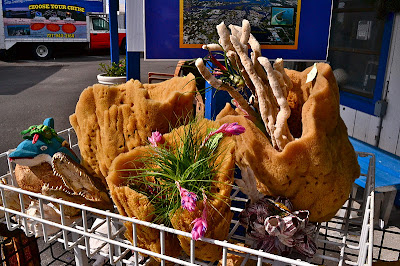 We enjoyed our visit to Tarpon Springs today, but we didn't see Sponge Bob!
Posted by Jeannie and Eldy at 11:40 PM