And Eldo's glad! Because he's hungry for a home cooked meal! The neighbors, Ritchie and Nick had him over for a spaghetti dinner one night, (Thanks, guys!) he cooked hamburgers for himself one night on the grill and egg sandwiches in the mornings a couple of times--I'm proud of you, hon! And the rest of the time, he "batched it" with fast food.....And probably the bucket of popcorn with a stick and half of butter on it in between! Now that the diet police are back, he'll be on quarantine for awhile, lol! Just kidding!

Sparky had a wonderful time....from flying from the Orlando airport to the recently renovated Detroit Metro Airport back and forth.......There's a really nice tram that takes you from one end of McNamara Terminal at DTW to the other and it's as quiet as quiet can be...nice touch! Moving escalator flat "sidewalks" are available for tired travelers with heavy loads....Airports are GREAT for watching people. 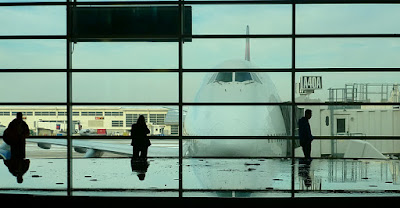 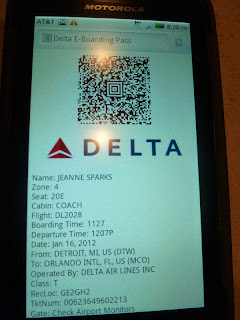 Sparky is trying to stay savvy with technology, so she checked in online the day before she was scheduled to fly, and had her boarding pass sent to her mobile phone, WITH a paper boarding pass printed out just in case the mobile phone app didn't register. Up she stepped to the boarding gate scanner, and breezily held the phone and its scan code over the reader and she was in the clear. You should have seen the looks on some bystanders' faces....WHAT?! THIS IS NOT A KID BUT AN OLD WHITE HAIRED GRANDMA USING TECHNOLOGY? What's this world coming to? She tries to stay up with the technology, but it's rapidly escaping her....Apple TV? What? We need another TV to stream movies? What's an Apple TV? About a 37" monitor and expensive as all get out? Naw, Apple TV is just a little box that you can use to download movies from Netflix or other sources straight to your TV if you don't have a Wii or an Xbox or other source or don't want to watch movies on your computer.

Sparky had a wonderful time people watching and baby watching, ESPECIALLY baby watching since she's going to be a grandma in June. 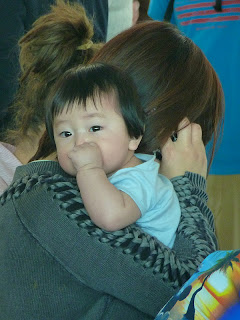 My brother, Charlie and his wife, Kris, flew in for the party and it was great to see them again... We really hang onto our family memories as we get older and love to talk about the good family times when we get together, so we did a LOT of that....Here we are together for a brief moment at the party.... 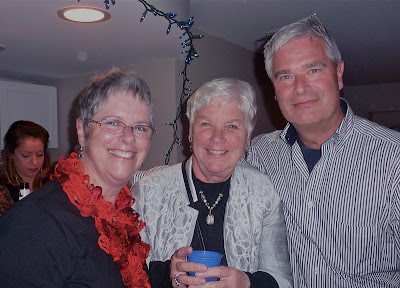 Lyle was very happy at the number of people who responded that they were coming, since she wanted her birthday to be more about the Ferndale Medical Clinic that provides medical care for those with no insurance than about reaching the age of 70. But our family is always up for a celebration, so we celebrated both! Her 70th is pretty special because she's conquered breast cancer twice! The party raised over 1,000.00 for the clinic---awesome! She gave a warm, heartfelt speech which caused a few tears to shed, I was in that bunch! 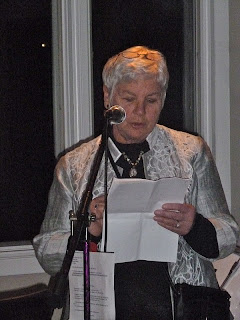 Lyle's sons--Ron, Jim and John and their friend, Paul who have played together in a band, practiced a set for the party goers for later in the evening. They did a great job, and we rock and rolled a bit! 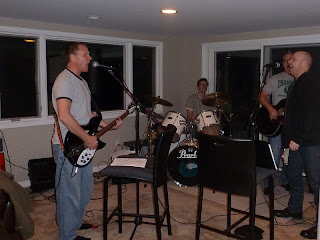 There was TONS of food, and great snacks...Sparky's favorite was the personalized M & M's with Lyle's picture on them along with a couple of birthday messages! She did her best to make a dent in the pile! 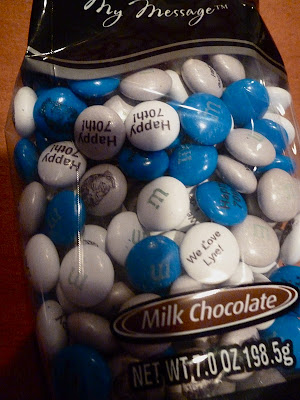 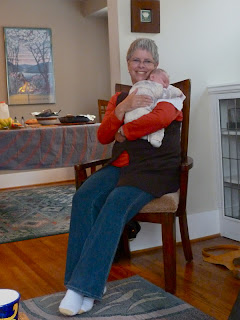 Sparky got to hold her niece and nephew's new baby for a LONG time so the parents could mingle and sit with each other for awhile....That's hard to do with a month old baby and little sister who's three....Sparky is READY to be a grandma! Bring it on, Kerry! (That's her daughter who's going to have a little boy in June, explains E.)  He was VERY cuddly!
Lyle's granddaughter, Paige, made a montage of photos and music of Lyle's life. She used a Ken Burns app they said, to make it. Sparky is going to have to check that out...It was a awesome video! 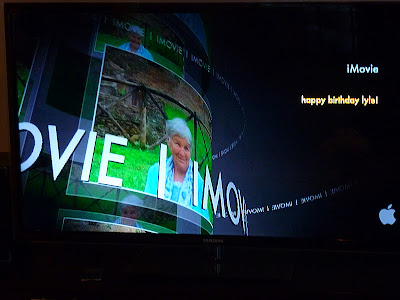 A wonderfully exhausting emotion filled weekend but I'm glad to be back home again.....
Posted by Jeannie and Eldy at 11:30 PM