Thanks for everybody that understood and made appropriate sympathetic comments about my dental trauma--I needed them! I told that story because I wanted to share a little of my personal self in my blog so my kids remember a little more about their mom than just travel stuff.

After being initially encouraged by the activities calendar for January, it's uncertain now just how many activities are actually going to take place! (Hold on, Sparky! It's a little early to be saying that!) True, I shouldn't say that, it's only the first week of January. Went to the knitting class this morning, only to find I was the only one who showed up! I guess I didn't get the memo that went around...seriously, there was a memo! The gal was sick...we'll try again next week! 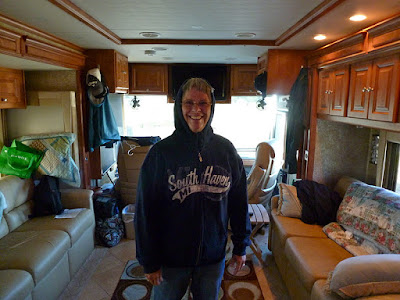 Decided to ride my bike around the park for about 2.5 miles...in 46 degree temperatures..Here I am ready to ride, no gloves or mittens, I don't have any idea where those things are! It was funny to see everyone digging for their winter coats, hats and gloves out of their tow car this morning! That's where we keep our bulky jackets instead of in the coach taking up valuable YARN space, ha ha! Sparky's got her priorities straight, that's for sure! (E. laughs....You DO?????? hahaha....) Well, I think I do! Heck, all that yarn is INSULATION behind the sofas for this cold weather we've been having here in Webster.

After finishing knitting a sock for my daughter, and watching old C.S.I. shows on Direct TV down in the hobby room, I decided to go ask at the office if they needed any help, ANYTHING at all I could do to assist? Boredom is setting in already! She handed me a package of toilet tissue and said, "Well, this is not very nice but it would REALLY help me out if you could refill the bathroom toilet paper holders...." I said SURE! So I did! That took all of three minutes, so back I went to the office. Somehow we got into a discussion about how fast the toilet paper disappears, and part of that is because people walk off with the rolls, thinking that it's ok to take them. And they think it's ok to take off with anything else left out after parties and get-togethers, even the salt and pepper shakers are free game! Can't believe some people think they are entitled to anything that's not nailed down....But that's the same principal applying to people taking home office supplies, I suppose.....

Met some really nice people next door on the next site to us...Their names are Ritchie and Nick...Ritchie is Scottish, which has to do with her unusual name...They are fun to talk to and we are really enjoying getting to know them.

Eldy took a nap, I baked some cookies--from a prepackaged mix--Betty Crocker I am not! Although I got the Betty Crocker Homemaker of the Year award in my senior year of high school...(HAHAHAHAHA!) Hush, Eldy! I have to admit it WAS sort of a goody two shoes award for being such a NICE, teacher-pleasing student and the home ec. teacher really liked me. It didn't have anything to do with cooking but I was a HELL of a sewer! (Now I can believe that! says E.) Then I signed up to be a volunteer for the local elementary school. But you have to have a background check, maybe fingerprints filed and by the time all that gets approved, I MIGHT get to go help one day in the school before we leave at the end of the month. Frustrating that I have to go through all that to just go volunteer in a school....It takes so much time that I won't get to make a difference and work with kids. Maybe I'll just apply in every state we visit and on the next go around, I'll be able to start helping right away!

So that was our day today......tonight temperatures going down into the TWENTIES....We'll be toasty in our Tiffin..bays are heated, no worries, mate! And no wind....last night the wind kept the awning toppers a flappin' and Eldy doesn't sleep well when that happens! Until tomorrow......
Posted by Jeannie and Eldy at 11:35 PM

Email ThisBlogThis!Share to TwitterShare to FacebookShare to Pinterest
Labels: Temperatures in Webster FL