This is all about the Cummins Engine/Generator RV chat that both Eldy and Sparky attended today....Geesh! LOTS of part numbers, specs, types of engines....BORING! But not to guys, judging by the number of questions about specific engine models on older coaches. 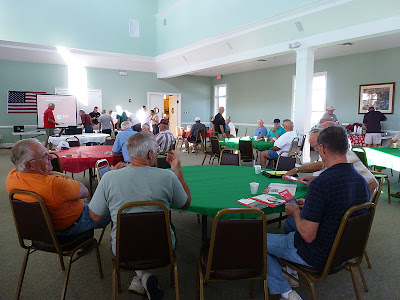 There was a big turnout for this discussion, around sixty people from Florida Grande showed up, all guys and one female besides that activity director. That would be Sparky! Eldo says he takes terrible notes so Sparky had to back him up. Three guys came into the RV park from Cummins, Ocala and Orlando service centers. They were Todd Whetzell, Bill Miller and Mike Martin. They gave an excellent  presentation first, complete with ticket drawings for free prizes interspersed throughout the lecture, then conducted a question and answer period after. There must have been a former teacher in the group! He had all the tricks for keeping everybody's attention. Sparky and Eldo did learn some stuff and thought we'd better share....Here are some things we agreed on and understood:

1.) Adding additives to your OIL is a NO-NO in the service people's handbook.

2.) Adding an extension tubing or spout to your generator tailpipe to vent it upward and to the top is a very bad idea and no extensions should be the rule. They told a very sad story of two coaches in a tight park where somebody on one coach had pipe venting the generator exhaust upward and the next door neighbor's AC sucked in the gases. The grandparents and their visiting grandchild died because the carbon monoxide detectors failed to register the amount of gases that came into the coach from the neighbor next door.

3.) Algae starts to grow in your fuel tank after about 28 days of sitting. Putting an additive in the FUEL tank IS recommended. Lucas Bio-Medic I believe is the name of the product they recommend. Adding an injector cleaner to the fuel tank is also ok, again, a Lucas product was recommended.

4.) They talked about using Cummins fuel and oil filters as preferable to using inexpensive ones and they had plenty of scientific and testing data to back that up. So much, that Sparky and Eldo are convinced that with an engine costing thousands and thousands of dollars powering your coach, why would you want to use a cheap filter to save a few bucks? They also mentioned that if a Cummins filter fails, it is 100% warranteed, so any engine damage is completely covered. No prorated losing of dollars, either!

5.) There is a Cummins club that you can sign up for online--it gives you a 10% discount on everything is our understanding...20.00 a year? We have to check that out, but there are some benefits to having this club membership that might be worth checking out. It's called the Power Club. (?)

6.) In 14 locations in Florida, Georgia and Chattanooga, TN, there are Cummins facilities that offer "Coach Care"...these service facilities have full hookups including water for motorcoaches to come in and stay comfortably while waiting for a service appointment or getting work done. Pet friendly, they said!

7.) Be careful of "Will fit Cummins engine, generator, etc." parts. They said something about you are out of luck if using these parts and it causes engine or generator damage.

8.) If you are a numbers guy, you should be concerned about torque not horsepower. Torque ratings are your pulling power. Whatever the heck that means, Sparky has no idea, although she sorta gets it. You better have great torque numbers to go over mountains! That's the ticket!

9.) There is a program called Quick Serve online, which is a web based program. There are different components to this program and different costs and options to signing up for different levels of service, at least that's what we understood from the presentation. Some of it was very confusing. Some part of this online service allows you to get a FREE 30 minute inspection of your engine if you sign up for the "Guardian" portion of it. This program is what the distributors refer to as well for parts, service, specs and everything Cummins sells. You need a service guide for fuel specifications? It's 47 pages online and you can get it there.

10.) You should keep your fuel tank FULL when sitting for long periods of time to reduce the amount of condensation that can develop in the tank. Use service stations that have a high turnover of fuel like Flying J, Pilot, etc. to avoid getting bad fuel and allowing algae spores to spread from their bad gas to your tank.

Sparky hung in there to the end, because she just HAD to find out how much we should be running the generator to keep it in tip top condition. She keeps telling Eldy that the generator needs to be exercised just like people do! (I know, I know. Sigh!) But he doesn't like to run it because you use diesel fuel when you do. Hey, folks, you people with diesel pushers, you need to be running your generators ONCE or TWICE a week for about an hour or two, at the minimum, according to the service guys! Do we do that? Heck, no! But Sparky is going to be on Eldo like a fly on flypaper after today's discussion group so we avoid problems later on with the generator. Why, the generator is running this very moment as we speak! Way to go, Eldo!

Time for a break from all this manly stuff....gotta go to jewelry class this afternoon and learn how to make earrings. Back to you gals tomorrow! Gotta mix this blog up a little now and then....
Posted by Jeannie and Eldy at 11:20 PM