I was ready...I was REALLY ready...I had the glam and the glitter and the candy out on the table. In come the gals, one by one...oohing and ah-h-h-ing over the cute little bags with the hand knitted key rings tied to the handles. I really had them in my pocket with the chocolate candies...If all else failed, I had M & M candy (my favorite!)  for myself to bolster my confidence. The first table was a rowdy bunch and one of the gals gave me a warning, "You're going to have trouble with this bunch! We all know each other!" I replied, "Ladies, I taught special ed. for 34 years, I can work with anybody!" They laughed.  Time to start, ladies!

I breezed into my yarn spiel---what kind to buy, what the yarns looked like, prices....I had their rapt attention. I wowed them with my reference sheet giving all kinds of resources, names, prices, help sites and where to get the yarn. Time to get down to the knitty gritty....tee hee hee......I found out later by word of mouth after all the gals had signed up that there were two ladies that did not know how to knit. The teacher in me says, I can handle that. I'll get the other gals going and work with the two who didn't know how to knit. I thought it was possible we could be able to work through that and get them going on a scarf. BUT--just to be on the safe side, I thought I'd better ask....

"How many of you do NOT know how to knit?" I knew there were two. This, despite the first notice that went out for the class that stated you needed to know how to do the basic knit stitch. The second reminder notice failed to mention that, so TWO MORE SLIPPED THROUGH THE CRACKS, and I had FOUR NON-KNITTERS on my hands....I took a deep breath and plunged in with the first gal. 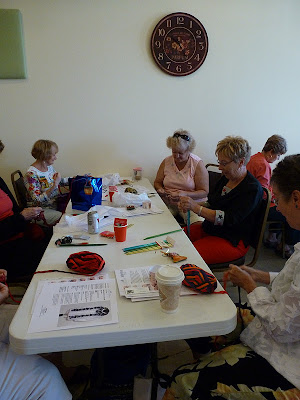 I was giving her my best memory strategies for learning the very basic knit stitch..."Make a teepee with your needles. Now go under the fence, catch the sheep, back we come, off we leap...." She's looking at me blankly, doing everything what appeared to be backwards and then she says, "But I'm a lefty"..The stunned look on my face must have been quite the look because at that moment, the entire table broke out laughing! To make matters worse, I said, "Oh, CRAP! " And everybody laughed again. To add to my difficulties, out of the four non-knitters, there was a second lefty in the bunch! And now, I panicked. I tried switching my hands and showing them how to do it left handed, but I couldn't figure out how that would look! And I always thought I was ambidextrous! (I used to practice writing with my left hand all the time when I was in grade school in case I broke my right arm.)

New strategy....get the gals started who DID know how to knit......They got going...The ladies came to my rescue. Good group dynamics today, they started helping each other while I was working with individuals...One of them kindly took one non-knitter aside and got her some basic yarn and needles and taught her the basic knit stitch. I worked with three of the other non-knitters...With encouragement from me and their tablemates on each side of them, two of them managed to learn the knit stitch AND get a scarf going. The third one gave up, but she was really really nice about it while I was apologized profusely. I felt very badly that she gave up.  But I told the class at the beginning, if there was anybody who couldn't figure it out today, I would finish the scarf for them....I've got two scarves to do....No problem...I'm on it!

It was fun despite a little nerve wracking...I learned a few things today. First, the communication between myself and the front office should have been a little better on my part....I neglected to put the the reminder on the signup sheet that you needed to know how to do the knit stitch. It did say "KNITTED Ruffle Scarf Class" but I had been talking it up as "It's EASY!" so I convinced a lot of people! Gee, I should sell cars! Second, people really enjoyed the class even if it was hard for some of them. Third, it was great to hear people say as they walked out, "That was really fun! This was the best class I have taken at Florida Grande." (From a non-knitter, natch!) But even one of the non-knitters really enjoyed herself today, she told me she really loved her scarf and was so happy to learn how to do it, so I was glad I worked hard to make it a fun environment. They got something to take home with them even if they didn't finish their scarf, (a free gift bag and a cute key ring for themselves or a grandchild), and there was leftover chocolate for me to take home! My stress level wasn't too bad if there was leftover candy! (Did you say leftover chocolate???  Where is it? Did you save some for me? ) Guess who that was!?

I'd teach a class again in a heartbeat! (Folks, this is coming from Sparky, who was a nervous wreck, wound up higher than a kite, and whose stress level was through the ceiling getting ready for the class for the past two days! explains E.) Naw, that's part of a teacher's makeup...nervous excitement for a new class and wanting everybody to get something out of it, no matter what their learning level is....I loved it!
Posted by Jeannie and Eldy at 11:30 PM