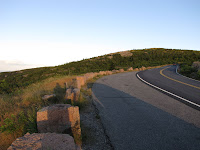 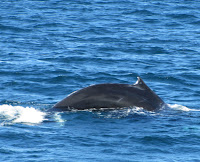 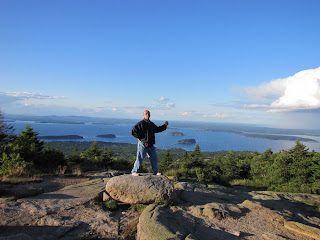 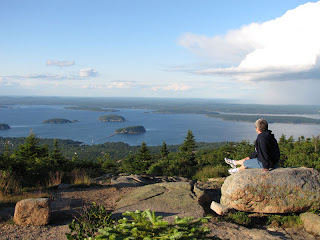 We are settled in our site at Smuggler's Den...no mishaps there! Yesterday, we went to a wonderful little restaurant on the bay, called Grumpy's. Fantastic food, reasonably priced, and no, the waitress wasn't grumpy. Then we explored downtown Bar Harbor(on foot, ha ha!) and the stores are so cool! Bought myself a good pair of hiking shoes, and took some photos. There is a restaurant there called "Jeannie's" so I told Eldy we HAVE to go eat there some day this week. We stopped by the whale watching cruise ticket booth, and on a whim, decided to go whale watching at 1:00 PM. They told us temperatures would be in the high 40's while out on the ocean, so we headed back to the campsite to dig out our heavier coats and out we went! For awhile, it looked like we weren't going to see anything, when Eldy called out, "I see one!" at the same time the guide did. We got lucky! TWO humpback whales, one they were able to identity as "Triton". (Don't you just love the names they come up with for these whopper mammals!) Triton and his friend were teasing us with close flipper/tale showings, but nothing spectacular, like in a National Geographic shot. well, just when I was fiddling with focusing my camera, up comes the companion whale and breeched right in front of me and Eldy!A breech is when they come up out of the water and show the bulk of their body, then slam back down for anybody wondering about what that is!) But I was so busy trying to get the perfect whale shot, I missed the breech! Eldy saw it, though, and it was spectacular and up close! I got pictures of spouting and a few of the humpback arching, but I missed the big one! Darn it! When we got back, we ate at a wonderful outdoor restaurant called Runioni's or something like that. What surprises me is the number of restaurants that have open walls to the street. You wouldn't expect that in a colder climate in the summer time, but there are MANY restaurants in Bar Harbor with outdoor seating, and walls totally open to the air and street. We're looking forward to trying a few of these this coming week. For the finale of our day, we drove to the top of Cadillac Mountain in Acadia National Park..the granite slabs everywhere were amazing. All the roads in and around the park have pink granite slabs that were placed to keep carriages, walkers, and cars from going off the side of the road. Amazing!


Thanks to everybody who is reading our blog. I have simplified how to make comments, and hope it will be easier to hear back from you....Jeannie
Posted by Jeannie and Eldy at 8:41 AM