In search of the elusive moose 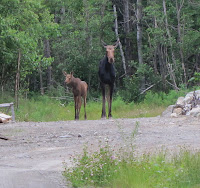 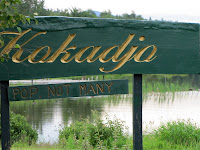 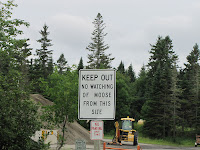 Well, you wouldn't think it would be so hard to see one. After all, according to the locals, moose outnumber the residents in Greenville and the Moosehead Lake area 3:1. So today we decided to go looking for one. No problem seeing them on signs everywhere..the locals tell you to go to several places along highway 15 to the south and north of Greenville and we did. South of town, no luck...we and about six other vehicles parked along a roadside bog and woods at dusk today hoping to catch sight of one, but all for naught. North of town, about 18 miles was reported to be another hot spot for spotting the moose. We drove past Lily Pond State Park and continued north thru a small dying town called Kokadjo. Finally, the road appeared to end into sportsmen camps and possibly Baxter State Park. Eldy decided to keep going down a gravel road that branched off the main road..we saw signs for various sporting/hunting camps and the road was rather rough. Just when I thought we should turn around (worrier that I am, we're going to puncture a tire, we'll be stranded in the middle of nowhere, some gun crazed hunting hermit is going to be accusing us of trespassing) when Eldy turns his head in the direction of a side road that looked to be the entrance to a logging operation, now defunct. The sign said, "No trespassing", but that didn't deter a female moose with her calf! When I first saw them after Eldy did, I thought that looks like one of those cardboard or wood cutouts that you see posted at the local souvenir stands in northern Michigan. I looked again, and HOLY COW! Moose are HUGE! Their legs are TALL! I swear it looked like you could walk under them and not have to stoop! We saw them at about 50 yds. from us. I actually was dumb enough to get out of the car. After all, they are only supposed to be able to see about 25 yds., their eyesight is terrible, they say. I got a good photo in, I was looking at them, they were both looking at me, and it was if the mother said, "Oh, you want a photo? You have to pay for those, c'mon, kiddo, time to go"...and off they trotted. It was a thrill to say the least. Tomorrow morning we are getting up at 4:30 AM to go on a canoe trip for a couple of hours into more moose country. Eldy is used to getting up at 2:00 AM to go to work for 43 yrs., but now that he is retired, he has to set an alarm to get up that early!Me, too! Hope the bugs and flies don't eat us up! PS. if you click on the photo, it will enlarge
Posted by Jeannie and Eldy at 8:51 PM