A "Gorge-ous" Walk to Remember 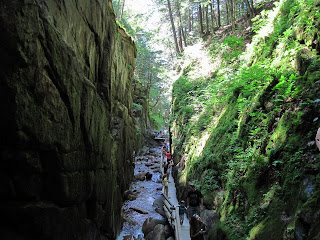 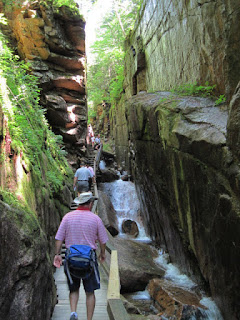 We are drawn back to the White Mountains today, which are 45 min. away from the Sugar Ridge Campground in Vermont. We decided to explore Franconia Notch State Park. It is a spectacular mountain pass with a parkway winding between two mountain ranges. The Flume Gorge and Cannon Mountain (approx. 4180 ft. high) are the star attractions here. Eldy decided he wanted to ride the tram to the top of the mountain. Guess it wasn't too scary the time we rode the ski lift without the bar down as he wanted to ascend the mountain in this tram. Enclosed car, brand new brake system and completely overhauled this year, I can go for that...24.00 a person gets you a tram ride to the top of the mountain and the observatory up at the summit, AND a paid ticket to traverse the walkway along the Flume Gorge, about 5 miles further down the highway. There are several trails around the mountain's summit if you feel adventuresome. (We weren't quite up to it today) Some sad news to report today---the Old Man in the Mountain's craggy granite face (Great Stone Face) is no longer there, he "died" in 2003, when erosion and water forces chemically eroded the five ledges naturally arranged to form a man's profile. I remember seeing something about this when I was younger, but it's a really big deal here in Vermont. There's a whole museum devoted to the "passing" of the historic site. On to the Flume Gorge...AMAZING!!! The Flume Gorge was discovered in 1808 by a 93 year old woman who went fishing and look what she found! It is a natural gorge with beautiful waterfalls, vistas and covered bridges. We are starting to feel like New Hampshire is one of our country's most beautiful states and we've only been to MA, ME, VT, and NH so far! ou could take a photo one right after another as you drive through the countryside. We went back to the old time general store in West Danville to mail some things and pick up a couple of things. Joe's Pond General Store--that's where the post office boxes are more than 100 years old and they have combination locks on them. It was a great day with great temperatures, about 83 degrees and very little humidity. It's going to be hotter tomorrow,(high of 89) wonder what we'll do? I'm sure Eldo will think of something! 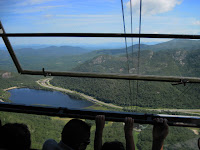 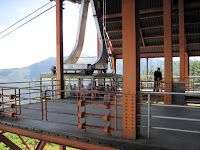 Posted by Jeannie and Eldy at 7:41 PM