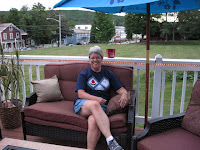 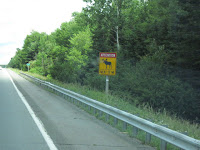 We arrived in Bar Harbor, Maine late today around 4:30. Using our app on my iphone, I had typed the address of Smuggler's Den Campground as 20 Main St., Bar Harbor. Unfortunately, the actual campground is in SOUTHWEST HARBOR. As we came into Bar Harbor, the GPS system on the phone told us to take a left into downtown Bar Harbor. The street was VERY narrow...cars on both sides, and we are driving a 38 ft. RV with my Honda CRV towing behind. Eldy kept saying, "This isn't right, this isn't right, this can't be the way to the campground."Me, having to be right 99% of the time, said, "Well, that's what the phone says...we'll be there soon..hang in there, people will get out of our way." He had his hands clenched tightly on the wheel. If you can picture a small harbor town, with cutesy stores every which way, bars and restaurants and outdoor cafes and little narrow streets with people and cars spilling out everywhere and looking at us like we were NUTS, then you get the picture. Eldy was going crazy trying to navigate the streets or I would have taken the photo to show how we were inches away from sideswiping cars on either side of the RV. BUT, I was doing my job as navigator (HA!) and insisting we were going the right way to the campground. A few minutes later, we managed to get ourselves extricated from the downtown area and back in a relatively quiet part of town while I called for directions..."Oh....you are in Southwest Harbor? We need to turn around and go back through Bar Harbor? only this time not the downtown?...ok...we can do that.." I had to promise Eldy a couple of beers and proof that the manager of the campground gave me the right directions and twenty min. later, we arrived at Smuggler's Den...whew! So-o-o-o-o-o, if anybody tries to tell you you can't navigate a 38 ft. motor home through the downtown streets of Bar Harbor, Maine, THEY ARE WRONG! and we have no scratches, either! photos coming tomorrow of various things...we are going to Acadia National Park tomorrow to get a special pass that gets senior citizens into parks for a great discount. (that's Eldy, not me, lol) PS. that's a "watch out for moose" sign..I saw as many of these as we did deer signs!
Posted by Jeannie and Eldy at 8:42 PM