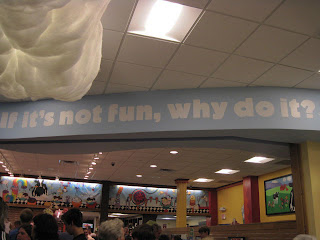 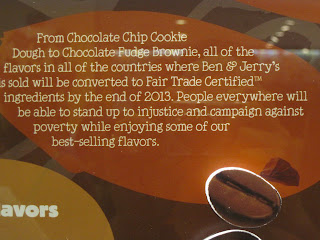 ICE CREAM!!!! If I can have my cheese, then Eldy deserves to have his ice cream. Off we went today to the Ben and Jerry's factory in Waterbury, VT, about one hour from our campground. I had an ulterior motive..if I got Eldy to sample some ice cream, then he would be willing to stop by and see 1)five covered bridges in two small towns within about a 2 mile radius (Lyndon, VT) AND a really cool museum in St. Johnsbury, VT (7 miles from our campground). Today, I will share the ice cream photos, tomorrow the museum in St. Johnsbury and the covered bridges in Lyndon. The museum deserves an entire blog devoted all to itself, because it was so AMAZING!!! But, we are on the move again tomorrow to Lake Champlain, so I better get everything covered today and tomorrow! Whew! OK, the ice cream tour...not very expensive, 2.00 each for seniors, tour lasts about 30 min., which is stretching it. Basically, you watch a movie about two guys, Ben and Jerry, classmates and friends since 7th grade, who started the company. After being rejected by college after college, they took a $5.00 correspondence course in how to make ice cream, and started from there. They were of the 60's hippie era. (All the employees wore psychedelic T shirts colored with "Peace, love, and ice cream"). You see one room in the plant, (no photos allowed because you might be a Hagen Daz spy, haha) where ice cream cartons are rolling off the assembly line and down a belt. They talk about different tubes and containers doing different things in the large room. It was very modern and very efficient, but very little to see due to the nature of the manufacturing process. You receive one small taste at the end of the tour, the choice for the day is a company choice. We did have a great guide--Bob, 6ft 10" tall, size 17 shoes, which added some interest to the tour, and a group of very energetic young boys from a summer camp who must have asked him ten times how tall he was. Bob was funny and had lots of enthusiasm, so that added to the tour. It is also a fun place to visit for kids..the tours are very well planned as far as timing, the waiting room is painted in bright, fun colors, and you can see the mood of the company is a fun one. Although Ben and Jerry are no longer with the company, they have passed along their desire to make the company and the world they worked in a better place. (see the photo on free trade marketing policy. The staff was energetic and their attitudes showed that they really enjoyed working there. There is a graveyard out back, made in fun, to show the flavors of ice cream that just didn't make it. After we left the ice cream factory, we headed for the museum in St. Johnsbury, closer to home. It was called the Fairbanks Museum, and the Romanesque architecture both inside and out was incredible. Then we covered the covered bridges...they were old, some in very poor shape, and would be much more picturesque in the fall! I'll show you the best bridge tomorrow...Stay tuned for the museum blog! Honey, how about a "Vermonster"? Ben and Jerry's recipe for an ice cream sundae (for real): 20 scoops of ice cream, 1 fudge brownie (aw, c'mon fellas, only ONE?) 4 bananas, 3 cookies, 4 toppings (your choice), 4 ladles of hot fudge, whipped cream and marshmallows...only 14,000 calories and 5000 grams of fat. (price? didn't see it, sorry!)
Posted by Jeannie and Eldy at 4:28 PM