A museum worth seeing 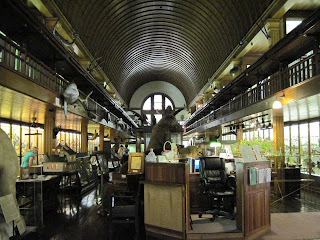 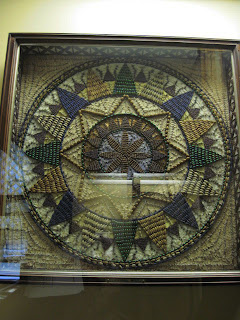 Picture this...A Romanesque building with massive stonework, towers, rounded arches, eyebrow windows, and carvings --gargoyles, lions, etc. On the inside, a barrel vault ceiling made of solid oak running the entire length of the building, cherry display cases, and the most interesting displays of odd and unusual animals, birds, and insects initially from one man's private natural history collection, Franklin Fairbanks. The Fairbanks Museum, is a fun Victorian era throwback of stuffed dead animals and of labeled things in jars and glass cases. One of the coolest exhibits was one by artist John Hampson. Using pins and glue, he painstakingly arranged dead bugs and bug body parts -- butterflies, moths, beetles -- into patterns and pictures that could be hung on a wall. Each of his works used between 6,000 and 13,000 bugs and took 3-4 years to complete. His designs ranged from a radiant star to a rippling American flag. That photo that looks like a quilt design is one of the examples of the bug art he did. It's a shame you can't see the detail--you get up close and you see little tiny pieces of butterfly wings, beetle parts, and the beautiful metallic colors that are present in the insect world. He also did portraits of Abraham Lincoln and George Washington! When he died, his daughter searched for a museum that would take his "bug art", and the Fairbanks Museum was the only taker.

On to the covered bridges! Lyndon, VT, bills itself as the "covered bridge capital of Vermont"...and with five bridges within two miles or so of each other, I'd say they have the right to claim that. We got a little map from the visitor's center to find these little bridges and they were very easy to locate. One thing I've noticed about Vermont besides the gorgeous hills, mountains and valleys, is that most towns have a visitor's center, unlike many other states, where the visitor's center is located at the interstate markers at the borders. Sometimes the visitor's centers are like little kiosks, not much bigger than that, but it's wonderful that the little towns have them! Another really cool thing about Vermont is of course, the antiques. We have not been antique shopping, but if that was an interest of yours, there are so many little places that are tucked in the corners of ramshackle old buildings that advertise antiques, I'll bet there's an Antique Roadshow find waiting to be discovered! We have no room in the RV, or I'd be out looking for the next find! A couple more neat things we saw yesterday out on our country drive---a true blacksmith shop at the side of the road, and then a welder working out of his home's garage, who had welded zoo animals and had them out on display in the yard. It seems like many Vermonters are crafters. OK, back to the bridges..average age 1865...some original, many had tin roofs added because of the winters, and some redone, but they were still cool! Watch for Eldo in Lake Champlain these next few days! 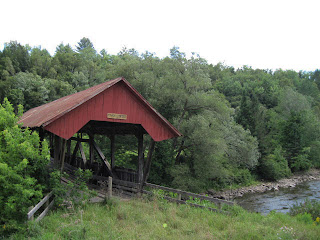 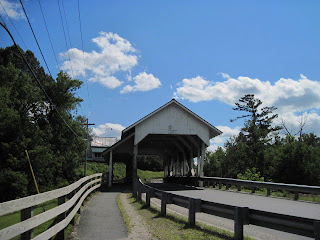 Posted by Jeannie and Eldy at 8:39 AM