Turner River Should Be Called Turn Around River!

IF you are paddling an inflatable kayak!  Let me explain....Sparky did a little research about kayaking Turner River which is about 15 miles west from the Midway Campground. The put-in is on highway 41 and well marked. There is a little park with a cement boat launch there. Sparky asked a ranger and two different veteran kayaking volunteers about venturing out on the Turner River today 1) as a solo kayaker, 2) and as a paddler in an inflatable kayak....She asked LOTS of questions...especially after seeing alligator after alligator after alligator sunning themselves in the canal next to highway 41 on the way to Turner River.

Is the river deep enough to get a good paddling stroke? "Well, yes, but it's rapidly getting shallower and drying up. It's about two feet deep in most place. Today is the last day for guided canoe trips."

Are there any problems with alligators bothering i.e. "attacking" kayakers? "No, there's never been a problem." Ok, lady, if you say so....more about that later.....

With those reassurances, Sparky decided to take the shorter, narrower kayak, the Sea Eagle 330 out on the river today for its maiden voyage. Now, the Sea Eagle 330 is considered about a hundred dollar boat for the internet special-buy one Sea Eagle 385 and get a 330 hull FREE so you get what you pay for, which will be explained later.. Sparky and Eldo agreed that Sparky would paddle for about two and a half hours, Eldo was to return after that time to pick her up. With Eldo taking pictures of Sparky embarking, she set out on the river.....So far, so good. Yeah, yeah, I know, I'm not even in the water yet. 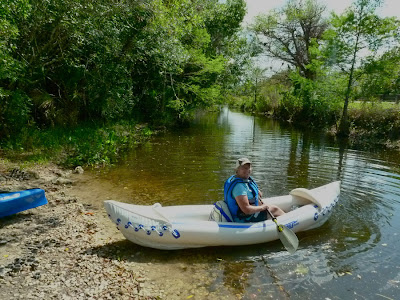 Paddle a little bit, turn the corner under the bridge, and here comes the river.......It's beautiful! 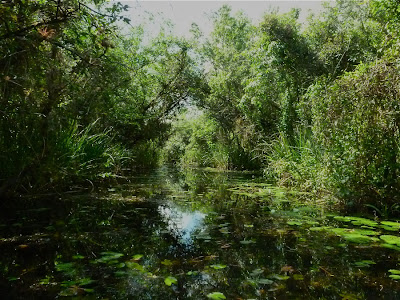 The boat has a lot of movement to it, it seems very tippy and doesn't track well....Sparky is not feeling really great about how the boat is handling so far. She has kayaked for over six years on rivers and lakes and in a variety of kayaks. The slightest bit of wind pushes the boat back and forth and spins it a little if she just coasts. There are two tiny little plastic skegs on the bottom, and they aren't doing diddly squat. This might be a fun boat to bounce around some little rapids, but so far, it's not quite the steady experience she was expecting....Let's continue on, she decides.....

Sparky looks to the left of her kayak and spots the first alligator swimming alongside her kayak....not too close, but it's unnerving....She fumbles with her new Aqua-Pac waterproof camera protector and nervously pops the buttons off it so it's no longer usable at the moment. As soon as she stops paddling, the slight breeze gets a hold of the kayak and spins it, drifting it a little closer towards the alligator. Sparky gets a little more nervous....she drops the camera in the bottom of the boat and quickly gets back on track. She looks back to the left just as alligator #1, with just his head and open eyeballs watching her, slowly submerges himself into the murky waters and disappears. Sparky wonders where he's swimming......She says a little prayer..... 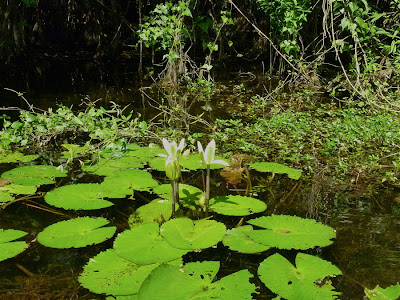 She looks to the right, and spots alligator #2. He's a decent distance away and eyeballs are half-way open.....and he's out onto a bank, sort of......He definitely looking disinterested, so Sparky tries to do a little deep breathing and relax and "feel" the boat.....It's very comfortable, but she still doesn't like the "yawing" it's doing.....She decides to check her cell phone signal and reassess the amount of time she wants to be out on the river today....She texts Eldo..."Make it ONE and a half hours"....The cell phone signal doesn't go, Sparky is losing signal strength the further she goes down the river. That's not good.. But, it's an easy float, very little current, maybe she can last a little longer....The river is BEAUTIFUL! Even if there are alligators on it....But it's a different feeling being in a WHITE kayak, that might look like a WHITE EGRET that might look INTERESTING to an alligator. They do eat birds on occasion, you know..... 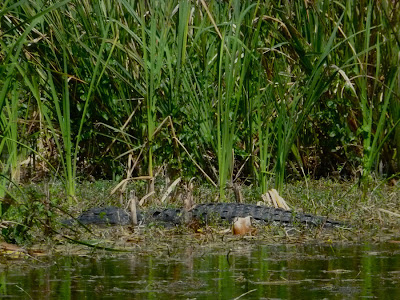 Sparky spots a blue heron....He seems to be used to kayakers. She gets really, really close! He still doesn't move. 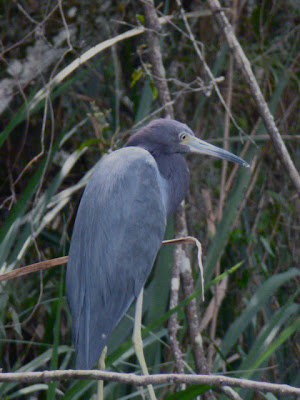 Sparky fiddles with her camera for a few minutes, checking for alligators on the radar, branches for snakes, and tries to get the camera back inside the Aqua Pac and use the zoom. The bird gets an attitude.
The river starts to narrow, and the mangroves and the tree branches start to hang over the river the farther Sparky gets...This was where it was still pretty open..... 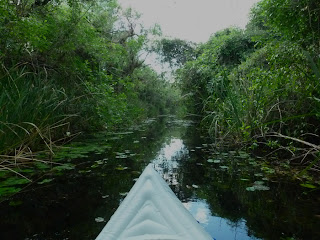 Sparky flashes back to the time when she was kayaking with a friend, and they had to maneuver over a log jam. Sparky is grabbing overhead tree branches and pulling herself over the branch jams, (she had a super tough, durable polyurethane "Tupperware" kayak) when her kayaking buddy shouts, "SNAKE! SNAKE!" Sparky yells, "Where?  Where?"  And she looks up to see a big black river snake coiled around the very same tree branch she has grabbed a hold of. She lets go like it was a hot poker, and the snake slithers across the tree branch into the banks and brush.  She was so rattled and shaken, she almost cried. Sparky now looks up at the tree branches closing in on her and back down to the river banks. Back and forth, back and forth she looks...She wonders what kind of snakes are here in this river. The likelihood of spotting a poisonous snake here in the Everglades is a LOT more certain than spotting a non-venomous river snake on a Michigan river! She's sure Florida snakes are poisonous--ALL of them!.....Sparky spots alligator #3. 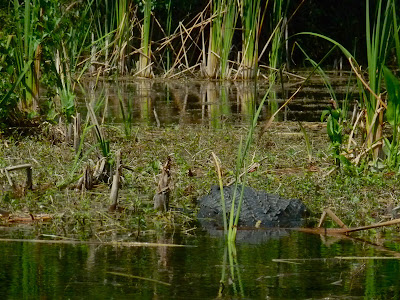 His backside is to her, but as she glides by his head turns sideways....THAT'S IT! She's done....Turn around and head back...she's had enough thrills for the day. It's a WHOLE DIFFERENT STORY when you are on the alligator's viewing level, well, almost the same level. They look a whole lot more menacing on the river than they do up on a boardwalk!  But really, it's the snake thing that spooked Sparky today. Say that ten times fast!

Eldo just thought he had better hang around the park landing for awhile, he was a little nervous about Sparky going out by herself today, so he was there at the landing when Sparky returned.....And he's disappointed to see how poorly the Sea Eagle 330 tracked on her maiden voyage watching Sparky head out. But we'll look for better waters to try it out again and give the 330 another chance.....Sparky is just glad to be back on land again! Whew! That was a little scary! (A LITTLE? wonders E.) OK, it was a whole LOT scary! Sparky will not do THAT again...different boat, maybe. With a group, definitely.  By herself? NOT! (Thank the Lord, says E.)

Before leaving Turner River landing today, Sparky saw an outfitter, a young guy with a bunch of kayaks. She decided to clarify her decision today to see if she had made the right one to go in the first place. Is this an OK river to kayak on by yourself if you have experience? Yeah, sure.
Ok to go solo kayaking? Yeah, it should be ok....SHOULD be ok? Well, yeah, but it's good to go with  someone who can "read" alligators, read their body language, sometimes they can be a little problematic. It might take a guide to know when to REALLY give them some room. But I'm not saying you have to go on a guided trip...  Uh, okay....thanks for the info. How much do you charge to go out on the river?  His fee for two and a half hours was 89.00, which might be well worth it, if you are nervous about going out on the rivers in the Everglades. You can now put Sparky in that category........

Tomorrow, we leave for Port St. Lucie, on the eastern coast of Florida....It's on the road again for Sparky and Eldo...Bye bye!
Posted by Jeannie and Eldy at 11:08 PM