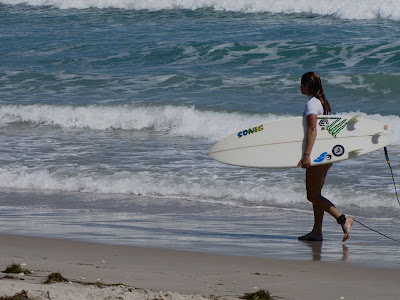 Eldo was ready for some BEACH today...We chose Fort Pierce Inlet State Park to get our beach fix today. It's located four miles east of Fort Pierce, via the North Causeway. It's the historic beach of today's U.S. Navy Seals...the half-mile beach is great for swimming, snorkeling, surfing and probably scuba diving--there's a reef 100 yards from shore, although picnicking on the sands sounded good enough for us! You can canoe or kayak on the Indian River Lagoon or go fishing. There is a walking trail called the Oak Hammock Trail, about a 30 minute walk through gumbo limbo trees-don't you just love that name? There are red bays and lots of oaks.  There's also a terrific bike trail that runs through the park to the picnic areas and a really nice playground.

There are two separate sections to the park. The smaller part is the state park, and the other part is the Jack Island Preserve, which is 1.5 miles north of the park. So lots of exploring can be done in this area, either on foot or by canoe or kayak. We didn't get to much today other than the beach, we were fascinated with the surfers, the surf, and Eldo loves the beach. Could it be because it's spring break and there were LOTS of bikini clad young girls out today? I thought so! You'll notice Eldo is not using binoculars, heh, heh..He doesn't need 'em...the girls were all over the place. What's funny was, some of the girls out on their boards were spending more time adjusting their tops and pulling up their bottoms, than surfing. Eldo kept watching for a wardrobe malfunction, but it didn't happen! 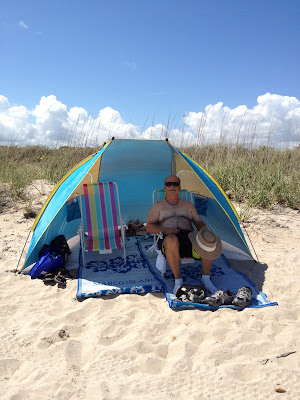 There are FOUR boardwalks over the dunes to access the beach...we picked the surfers side of the beach. The surf was definitely up today...BIG waves, LOTS of people surfing--with boards and with their bodies....Even the little ones were learning how to read the surf and get up on their boards! 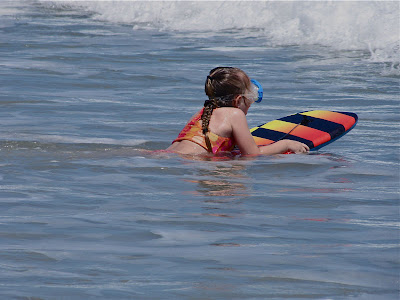 We saw a jellyfish washed up on the beach...it looked like it had exploded...later in the day, at another beach we passed, we saw the yellow flag up for the surf, and then a purple flag. The purple flag means "stinging animals" at the beach. We wondered if there were a lot more jellyfish coming up in the surf today....Swim at your own risk! 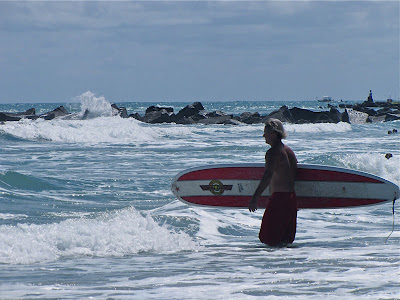 This dude looked like he was a California surfer dude...he was pretty good on his board...we saw lots of good surfers out there...They were fun to watch....and easy on the eyes, too!  :-)
Even if the waves weren't all that big, the kids still managed to get a lot of action on their boards of all sizes and lengths.... 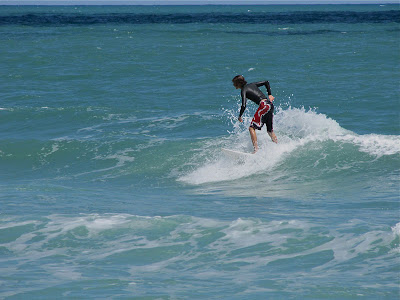 Sparky had fun looking at all the people, especially the little kids having one at the beach. These little guys were really having a ball in amongst the rocks that lined the inlet on one side of the beach...She missed a photo op when the little towheaded blond had to pee....She could have shot a photo without revealing anything but a fountain stream coming out of a little bathing suit! But the moment passed. As well as it probably should have..... 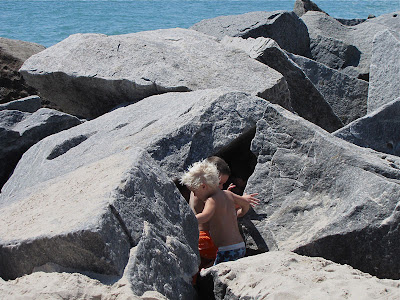 We had a wonderful, lazy day at the beach today with our little cabana, our picnic lunch, and all the time in the world to watch the clouds roll by, the college kids struttin' their stuff on spring break, the little ones making sand castles, dads and moms showing their kids the surf, jumping the waves and the beautiful weather.
Posted by Jeannie and Eldy at 11:13 PM