....you would have to enlist..." is the title of the National Navy UDT-Seal Museum brochure. Because Fort Pierce is fairly close to us, and the site of the first training center for underwater demolition experts, it is the home of the museum to honor the Navy SEALS. We wanted to visit it today, the perfect thing to do on a very rainy day. 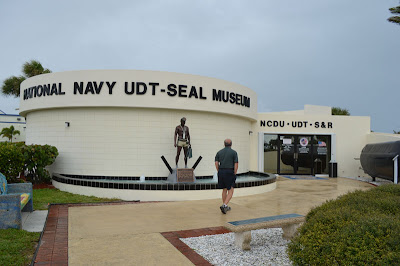 This is the closest you will ever get to seeing what the Navy SEALS do and how they do it and that's why the title....Anything really current about them is highly classified--this is a trip into the past to see how the underwater demolition teams (UDT) came to be, how they developed and honed their skills through the years to become the elite, secretive team they are today.

The museum is right on highway A1A, 3300 N. Highway A1A to be exact.  The UDT refers to the Underwater Demolition Teams, the precursor to the current navy SEALS team today, that were so critical to WWII.

The teams of Scouts and Raiders as they were first called, were critically important in the history of WWII, and the concept for this type of team was formulated in 1944 after many marines were lost because of natural obstacles. The call went out for a team to be developed. 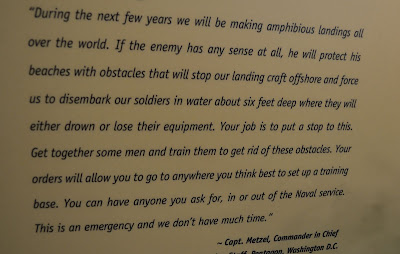 It was very interesting to read the first hand accounts of the men who fought for our country and cleared the foreign waters of obstacles and bomb hazards for the landing troops in Japan, Korea, and the beaches in Europe and to see the actual obstacles that were placed to keep our troops from landing on foreign soil. This is something we'd never seen in all the stories about WWII and the movies.

There were at least five different kinds of obstacles placed in the waters and on the beaches--all designed to impede or stop our troops and vehicles from landing...."hedgehogs"--teepee looking structures, a "horned scully"--placed in 6-8 feet of water, tetrahedrons--pyramid shaped concrete, and more.. 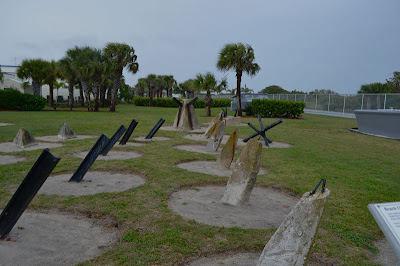 You see these as you walk up the front path to the museum..You also see a Huey helicopter, a captured Iranian gun boat, and mini submarines.

Fort Pierce is the "birthplace of the underwater warrior"....The story of how the underwater demolition teams got started, the history of the Scouts and Raiders as they were called, the importance of these "frogmen" in previous wars, their equipment, are all laid out in exhibit hallways and well organized. 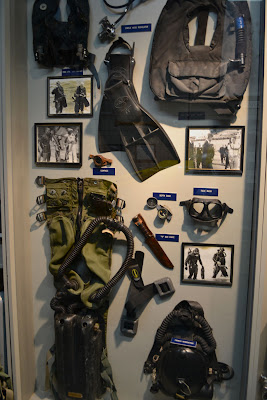 In the north gallery, the evolution of over 60 years of naval special warfare is displayed with firearms, photos, knives, diving and marine equipment. There are mini audio tours of stories that are declassified and now can be told. 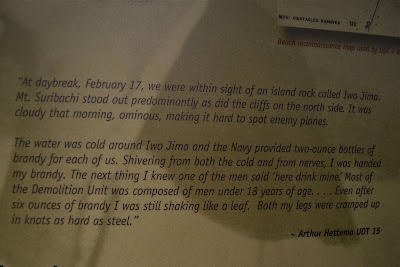 In the newest section, awaiting funds to expand and engage visitors, you can see the actual lifeboat and story of the SEALS 2009 rescue of a ship's captain that was held hostage by Somalian pirates along with some of the other vehicles that the SEALS use...including a HUMVEE manufactured in Sparky's former teaching hometown of Mishawaka, IN....

We heard a veteran taking a couple of guys around. He must have been one of the Underwater Demolition Team guys...He was wearing a tee shirt with the SEALS logo on it and was telling lots of stories to two gentlemen were were listening with rapt attention...stories all about the equipment, a bomb going down the smokestack on one of the ships--what war he didn't say...We didn't want to eavesdrop as it appeared to be a special private tour, so we moved on...But we would have loved to have heard some more of the first hand stories!

There is another section to the museum that is practically empty....there is an architectural plan and dream to finish it some day, but they need another million dollars to complete it. It will be an amazing completion to an interesting museum, with much more excitement--video murals, interactive portions to enhance what is already there and to add to the visitor's enjoyment and knowledge. It appears they are struggling to raise funds to complete the museum, as so many special interest places are...We hope that it will get completed some day...This is a tribute to an amazing, elite, highly trained group of men who protect our freedoms. Because everything current is highly classified and top secret, you can only get a hint of how tough the training and missions are today.....

The last thing we did was visit the museum store...there we saw a tee shirt with the following inscription:
"The last thing going through Bin Laden's brain was a Navy SEAL bullet."

On the way out, there were blocks with engraved names of contributors to the museum's efforts to raise funds to complete their project. My favorite was this one...... 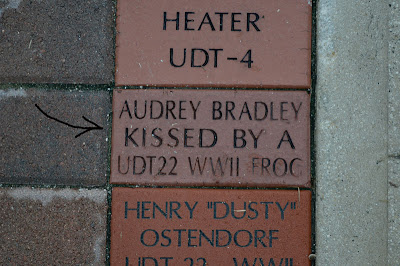 We enjoyed our self-guided tour today....8.00 for adults, children 6-12--4.00....and we recommend it to anyone passing through the area....It makes you very appreciative of what the Navy does to protect our citizens and preserve our freedoms. 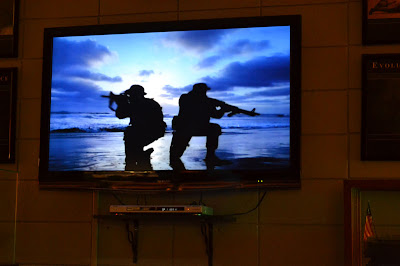