Sparky and Eldo Buy a Boogie Board!

After seeing all the surf yesterday, and the terrific waves, Sparky revisited some wonderful childhood memories of body surfing the big waves on Lake Michigan....Now granted, Lake Michigan waves are NOTHING compared to the BIG KAHUNA waves of the Atlantic Ocean, but when you were a kid, they sure seemed darned big at the time. She remembers being pummeled by the waves, slamming against the bottom sand floor, then coming up for air, laughing and riding the waves again and again, pretending to be a dolphin and diving in the waves. Sometimes she would even lose her breath and swallow some lake water, come up sputtering, and STILL go back for more.

Sparky was DYING to get in the water and ride the waves again...With two sets of adult children coming a week apart and soon, Sparky and Eldo decided to go visit a surf shop in the area, to shop for some BOOGIE boards...the boards that are sort of about the size of a half surfboard. You use them to ride the waves....Sparky AND Eldo are going to have some fun with the boogie board tomorrow, if the weather is good. These guys are having just too much fun! 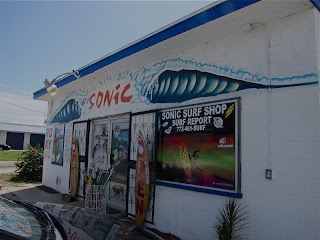 We stopped at the Sonic Surf Shop in Fort Pierce on Dixie Highway. It was just a little store, but we found what we were looking for....a boogie board or two.... Eldo was checking out the surfboards, SERIOUSLY checking them out. Sparky became alarmed and immediately put the kibosh on THAT idea. She gently said, "ARE YOU NUTS!?" and asked how come Eldo wanted a SURFBOARD instead of a boogie board. He says, "Well, if I get out there, I might try and stand up on it, but actually, I just want something big enough to put my whole body on to ride the waves." STAND UP ON IT????  Eldo's balance is not much better than Sparky's and there is NO WAY either one of us is going to be able to stand up on a surfboard....No way, no how!  Sparky is visualizing all kinds of injuries at this point....surfboard smacking her in her front teeth (see previous post on dental trauma), a surfboard whacking Eldo in the head, knocking him out....She took a deep breath... "OK.....But honey, a boogie board is big enough. A boogie board will work for us."...So we got one! We got two actually, one adult size and one kid size. Cool! Now we gotta hope for some serious waves when we get back over to the gulf side when the kids come.....

We headed over to a beach on the Barrier Island/Vero Beach area right beside the Disney Vero Beach Hotel. We think it was called Wabasso Beach, but we're not sure. It's a FREE city beach, no charge, tiny parking lot and lifeguarded. Once we get the boogie board to the beach, Sparky wants a LIFEGUARDED beach and lots of people around in case we get into trouble.  Sparky wants a lifeguard in serious, buff shape in case SHE gets into trouble. This one will do!
This guard was working out constantly while we were there, BUT WATCHING THE BEACH, while lifting weights, and he even has stretch bands for additional exercises besides using free weights. There was another guy on duty behind him and the other one was just as buff! (AHEM! I thought you were taking photos of the people at the beach! says E.) Oh! Yeah! The surfers....here they are...one of quite a few surfers.... 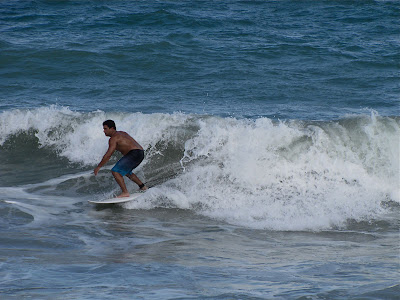 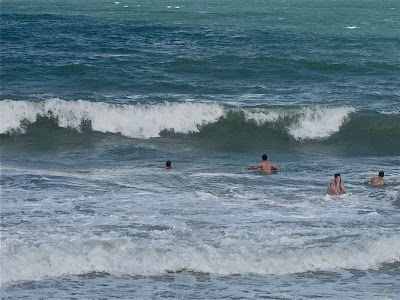 A group of kids bringing jelly fish/Man-O-War animals on their "jai alai" sticks to the guards' attention....It appeared like villagers bringing an offering to their native chief by the way it went down. He's standing up on his platform (see above photo of buff lifeguard). He smiled with approval, and gave them the flag for the flagpole. 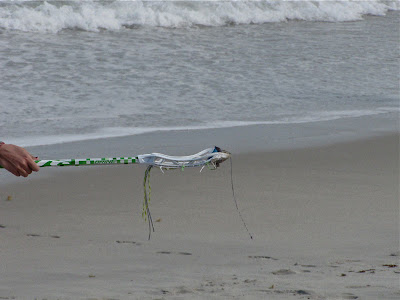 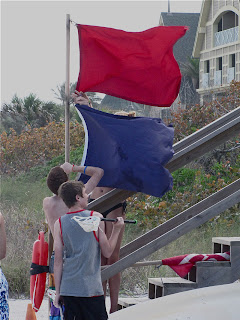 The purple flag immediately went up with a whistle blow to announce an additional flag was added to the staff. Purple means dangerous marine life....Coulda meant sharks for all we know! There were two shark attacks at Cimarron Beach north of Daytona this week.  Hmmm-mmm, Sparky is now a little worried.....Reports of stinging marine life are on the TV as well the last two days. I asked the guard, how do you decide when to put the purple up? Do you have to have a certain number to put up the purple flag? Nope, they just walk the beach in the morning, and if they see jellyfish or the other type of stinging animal on the beach,  or someone gets stung, they go ahead and put the purple flag up.

Sparky got stung by a jellyfish/Man-O-War back in high school and she STILL remembers how painful it was!


It was another beautiful day at the beach on the Atlantic Ocean side! 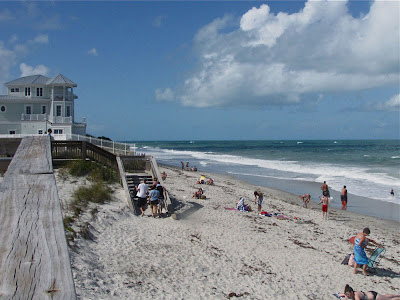 The weather is sort of weird, though...Lots of intermittent rainshowers off and on ever since we've gotten here to Vero Beach/Sebastian, FL., for the last eight days... Every day, you can count on a rain shower or a drizzle lasting moments or longer, usually occurring in a very small area...Drive a little further, the sun is out, and the rain clouds are elsewhere....It keeps things interesting as far as planning outdoor activities, that's for sure! Locals say that's common, and it's very unusual to have rain last a half day or all day....We've had that, too!  Maybe we'll see you on the beach tomorrow!
Posted by Jeannie and Eldy at 11:11 PM