After having inflated her Sea Eagle one time, but not being able to get it out on the water because of wind and bad weather since then, it's been two weeks since the weather has cooperated and we've been near water for her to try it out. Today was the day!

Here's how it went....The Sea Eagle 385 Fasttrack was to be put in at Wembrow Park in Sebastian, a nice picnicking park with a boat dock and launching ramp, off highway 512. With great confidence, Sparky unloaded the kayak bundle from the car with Eldy's help. She unwrapped it, got all the gear out--the life vest, the paddles, the repair kit (just in case), the air pump and hose, and the nozzle--nozzle? What nozzle? You mean, the special nozzle that inflates all the valves? Oh, crap! It's back home in the zip loc bag labeled "kayak parts" in the overhead cupboard...All Eldy says is, "JEANNIE......." and heaves a big sigh, gets in the car, and starts back to the RV park and rig to get the nozzle so Sparky can inflate the boat, he has to drive a distance of about 5 miles. Meanwhile, back at the park and the boating ramp, Sparky all of sudden remembers, that maybe she DID have the correct valve inserter. She checked in the little orange canister of stuff that is the boat repair kit, and by golly, it was there!

She calls Eldy immediately..."Uh, honey...I've got it! I wasn't such an idiot after all! I put it in the repair kit canister, it's right here with the boat!" Silence at the other end for a moment, then Eldy says, "OK, I'm coming back." He had almost gotten all the way back to the rig. He gets back, says absolutely NOTHING about what an idiot she is, we get the boat to the water, and Sparky gets in the boat...

No photos of her setting out in the boat, no camera phone handy, and Sparky's point and shoot camera has gone to the Best Buy repair center, so we're without a camera for the moment. Sparky forgot that we had brought the SPARE Apple non-working iphone 3G for a camera for the kayak paddle today, it was in her pocket, but more about that later. We COULD have taken a photo of the maiden voyage and Sparky paddling off into the wild blue yonder in her Sea Eagle Fasttrack 385, but we forgot we had the spare phone. Off she goes on the Sebastian River! 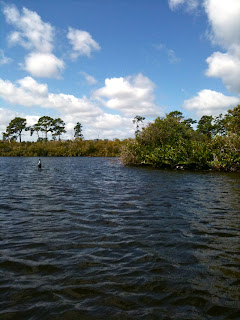 The Sea Eagle 385 is TERRIFIC! It tracks really straight! No pitching, no yawing, it paddles as well as a hard shell kayak, and Sparky should know, she's had several different hard shells over the years. She just had one slight itty-bitty problem, the seat. It's a boat cushion style seat with two inflatable parts and for some reason, the back part went flat almost immediately out on the water. There are a number of reasons this could happen, so Sparky tried to figure out what it might be. It was a sight to behold, for sure....Ever try to fix a seat in an inflatable boat which has just a teensy bit more wiggle to it? Scoot forward off the seat, reach back, unhook the seat, blow it back up, hook it back up, and scootch back onto the seat again without losing your paddle overboard in the process. It would have made a funny home video to see Sparky's contortions trying to fix the seat, for sure!

Off she went again....this time the bottom half of the seat went flat. Sparky thinks that the seat cover material may have gotten caught in between the valve stems on both parts of the seat but she's not sure. She decided to just keep paddling. Actually, the bottom of the boat is a nice fit to the butt, and it was very comfortable sitting on the deflated bottom half of the cushion. So comfortable, that she continued her paddle for a couple of hours more, enjoying how great this boat handles as compared to the Sea Eagle 330 which pitches and yaws and blows all around in the littlest bit of wind. Sparky is VERY happy with the 385...Now if she can just get the seat to work right. When you are wearing a life vest, it pushes your butt forward on the bottom cushion, so it's not as comfortable on a longer paddle. Sparky is thinking about substituting a different style, more traditional foam paddling seat for her boat... 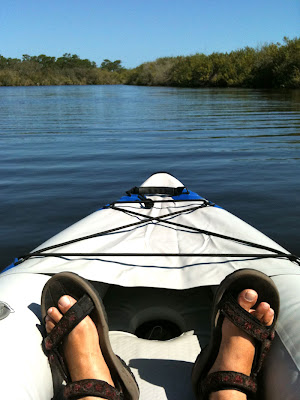 Sparky managed to get a couple of photos with Eldy's old iphone, the 3G....She decided to take it instead of Eldy's wonderful iphone 4S with the terrific camera, even if she did have an Aqua Pac to keep Eldy's camera in. It's just better to take an older camera phone just in case, and who wants to mess with a plastic encased, enclosed camera in a plastic pouch anyway?....Eldy's old phone to the rescue! She managed to catch on camera phone this osprey who happened to have a fish he was working on, but he didn't like having his picture taken. He took off with the fish shortly after. 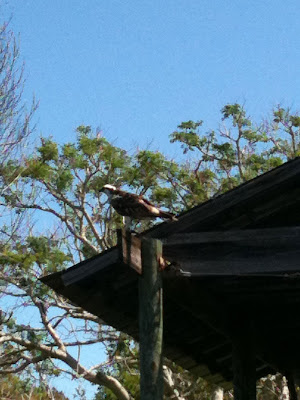 Time for a little rest break, Eldy's old 3G phone captures the moment! Not a bad closeup for an aging camera phone, longer distances are hard to get a clear photo. 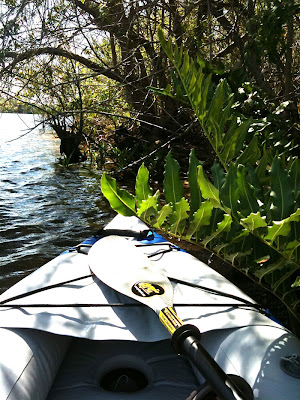 Awhile later, after viewing tons of shore birds, pelicans dive bombing for fish, it's time to get back to the dock. It's windy, and Sparky is getting tired.....Sparky pulls up to the dock, climbs out of the boat, leans over to get her paddle out of the boat, and PLOP! The camera phone fell into the water! OH, NO! Sparky grabbed it quickly, and Eldy's old phone was rescued from a waterlogged demise with just moments to spare. IT STILL WORKED! The camera still works! Woo-hoo! and WHEW! Glad it wasn't Sparky's Motorola Atrix, or Eldy's iphone 4S.

Whatever she decides about the boat seat, the boat itself is a KEEPER!  It was a VERY enjoyable paddle today....Sparky LOVES her boat, the 385 Fasttrack, and highly recommends it!
Posted by Jeannie and Eldy at 11:11 PM