Karen of RV Travels with Karen and Al, has been graciously sharing places to go kayaking around Sebastian and Fort Pierce, FL since they've been here before. She suggested heading out to the Wabasso Park area, which is a little park right at the Wabasso Causeway bridge. That's where they saw dolphins, and some other interesting things you don't normally see on a kayak outing when they went last year in September.

Eldo stayed home today to watch some of the "March Madness" basketball. He was hoping to see some little unknown college team whomp a BIG NAME college team, just to mix things up a little. A couple of teams did and I can't even remember the name of the little college that beat Missouri, but that's ok, you guys and gals who know basketball do! So Sparky went off to do some serious kayaking, and LOOK FOR DOLPHINS.

Sparky got to the park which is an easy drive from Sunshine Travel RV park. Head down 512 to the Publix grocery store center at the corner of 510 and 512, hang a right, drive straight to the causeway bridge and the park is in two sections, one before the bridge, and one after. Those are Sparky's kind of directions...lots of landmarks or a straight shot so she can't get lost. Pick a park! Sparky picked the second little park. Out comes the Sea Eagle, inflate it, and try out a DIFFERENT seat this time, a traditional kayak seat. Sparky discovered that it's pretty difficult to keep your fanny on the inflatable seat cushion that comes with the kayak IF you wear your lifejacket. It skootches you forward and you feel like you are falling off the seat.

Success! The other kayak seat works great, and Sparky was off in search of dolphins...Never mind the beautiful houses along the waterfront, some with the mangroves cut down in front of them...Hmmmm, I think that's illegal if I remember what Karen said in her blog, illegal to cut down the mangroves, which happen to be one of nature's best defenses against hurricanes.

OK, hug the bend and shoreline, keep track of BIG landmarks so I don't get lost. This is a good landmark! I think I'll be able to find my way back with no problem at all...(Well, I should hope so! says E.) Easy for him to say, he has a built in GPS in his brain...the man NEVER gets lost! 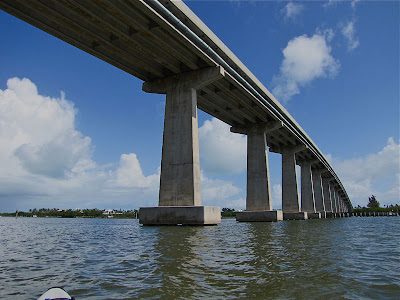 Time to check out some FINS! I saw LOTS of fins today...LOTS of dolphins! Unfortunately, I had the SL-O-O-W camera today...the old Canon 20IS...that shutter is so slow, by the time I saw the dolphin body, got the camera focused, pushed the shutter button, the dolphin was DOWN again. RATS! But I got evidence that there were dolphins in the area.... 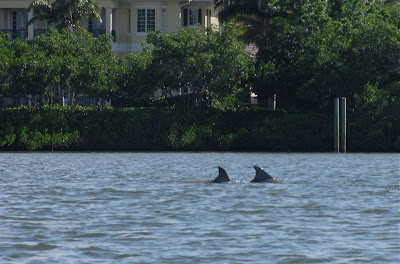 I also got LOTS of exercise and hard paddling in. I would see multiple fins and dolphins spouting a little ways off, track the kayak towards the forward direction they were heading, and paddle like hell to get there, only to miss THE great shot. Time and time again, I would watch for them to surface, grab my camera, look in the viewfinder to compose the shot, and---TOO LATE! I missed them coming up again. Or I'd race to the spot where I thought they were going to come up, and no dolphins. At one point, my daughter called and I answered the phone, as I was just sitting nearby the shore. I can't help myself, I never can stop scanning the water for dolphins. After chatting a few minutes with her, I spotted a dolphin nearby. This one was CLOSE.  "GOTTA GO, KERRY! Sorry! There's a dolphin coming straight for the boat! Gotta get a photo!" "OKMomBye." She knows her mom and how she's gotta get the photo.

At one point the dolphins surfaced BEHIND the boat. I heard the "FOOPH!" of air, looked behind me, and a pair were surfacing just a few feet away. Spectacular sightings today, some very very close, but not so spectacular camera shots. That's the way it is LOTS of the time with Sparky and dolphins. (Which reminds me of the time Sparky missed not one, but TWO whale breeches, because she was fiddling with her camera, says E.) SH-h-h-h! We know, we know! A lesson to be learned in appreciating nature and remembering it with God's gift He gave you---your memory! Ah, yes...but Sparky's memory is not so hot, so photos are always good if you can get them! And she'll keep trying for that great dolphin photo! 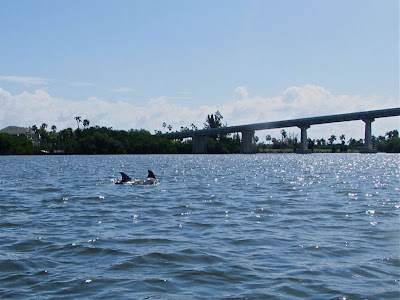 LOVE the Sea Eagle 385 Fasttrack, it tracked really great today...just as great as the old hard shell kayaks I used to have, AND it handled big boat waves really really well....(Uh, Sparky, you didn't have any big yachts bearing down on you in the middle of the channel, did you? Like the OTHER time? wonders E.) Uh, nope! I was careful this time to watch the channel and boat traffic, but that's where you usually find the dolphins, ya know?
It was a GREAT paddle today....saw shore birds, the pelicans, an osprey... 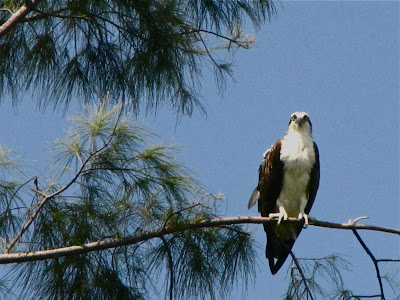 But the best viewing of all was the dolphins...Never get tired of seeing them, watching them chase fish just under the surface of the water, saw that today, too, watch them play and lazily swim around in circles for awhile, and then move on....Time to move on....Maybe we'll see you tomorrow? 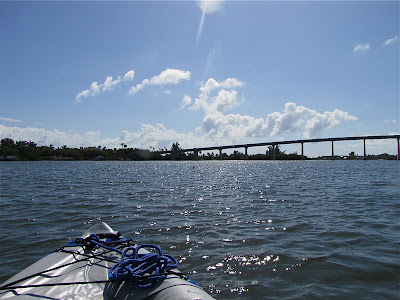