Our second day in the Everglades, our second trip out to Shark Valley...Not sure why they name it Shark Valley, it oughta be "Alligator Alley"!  When we were here in December, there were at least 15 alligators sunning themselves on the 15 mile bike/hike trail. You had to ride around their tails to get around them. Most of them were comatose on the boardwalk, so it was no worries, mate!

Today, most of them were in the water....but we saw PLENTY of them! At least as many as last time. There was a couple riding the trail on their bikes, wondering about all the different birds they were seeing. So Sparky, being the ever helpful teacher, starting mentioning the egrets, the anhingas, the herons, and the couple were very friendly and appreciative back. Their names were Marilyn and Denny (?), hope that's right, and they were from Minne-SO-ta. Denny had that delightful Minnesota accent that almost sounded Canadian. We talked along the whole way to the observation tower and really enjoyed their company. They were both teachers as well, Marilyn was a remedial/special reading teacher so she and Sparky traded work stories. Marilyn and Denny are not both retired yet, but wishing they were!

We saw TONS of turtles today, and TONS of great herons standing on the asphalt trailside, one after another. We saw wood storks today, which we had not seen last time. These ibis and egrets were following this "grandpa" woodstork around like little chicks following their mama hen. 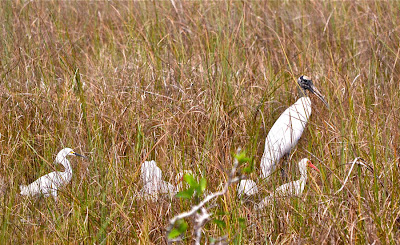 Lots of anhingas were sunning and swimming, and we saw lots of baby alligators out and about. 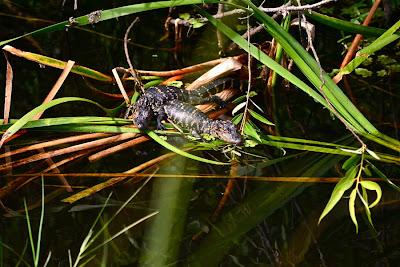 Of course every time we saw the babies, everybody cautioned each other, "Watch out for the mama, she's gotta be here somewhere."

Denny had a scary story to relate as he was in the back of us, taking photos and caught up at one point. He said there was a big alligator hanging out by a culvert, sticking its nose into the culvert. It was on the left side of the road and Denny was coming up on the right side of the bike path. As the gator entered the culvert, he belched or burped "or whatever sound they make" as Denny put it. The sound reverberated through the culvert, amplified, and came out the other end just as Denny passed the culvert on the right side. Denny about sh** his shorts and about fell off his bike the sound was so loud and so close!

The observation tower marks about halfway through the trail. There is NO water at the observation tower, so once you start on the 15 mile trail, you need to have a ton of water, especially if it's very hot like it was today. We get to the tower, and we parked our bikes. You cross a little bridge to walk the rest of the way to the tower. There's a canal and pond on each side of the bridge. We noticed an alligator swimming towards the bridge just as we were crossing. He was swimming quickly and we turned around and looked behind us to see if our new friends were following. By this time, the alligator had started climbing the rocks and we could see that he intended to come across the bridge. 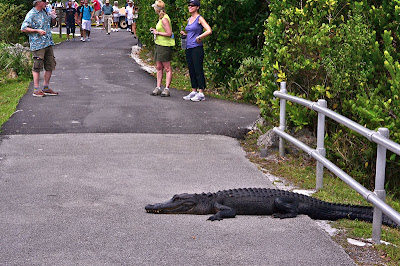 Denny and Marilyn were a little farther behind us. They had to stop along with a large group of people who had just gotten off the tram ride that the park runs on the trail. The alligator ambled across the path and plunked himself down right in the middle of the path, eyes open, and mouth just a little open.

The group behind us froze, and we heard the driver of the tram say, "Goodness gracious!" (He really did say that! E. verifies.) He got out of the tram with a big long pole. He proceeded to give directions to the group, wanting them to cross directly in front of the alligator! We couldn't believe it! 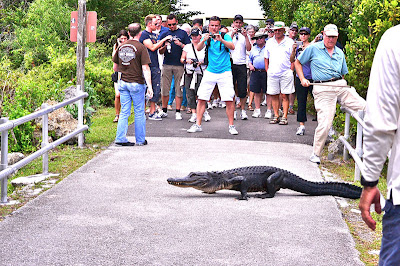 He said, "I want you to walk directly and firmly right next to the rail...Whatever you do, DON'T STOP IN FRONT OF HIM TO TAKE A PHOTO, just keep walking. (What idiot would in his right mind stop to take a photo?? asks Eldo.  Wait a minute, I can think of one!)  Uh, I don't think I would have stopped, says Sparky, but then again, I had already crossed the bridge BEFORE the alligator climbed up on the bank and onto the path.

"Whatever you do, just don't stop to take a photo, KEEP WALKING!" repeated the guide. Yeah, right! Everybody in the group just looked at each other, and were looking to see who was going to be alligator food first! Nobody moved. Our new friends were figuring, well, it was nice knowing you, guess we will be parting ways right here and now, and guess the gator is going to keep everybody from going to the observation tower. Looks like we will be turning around right here... 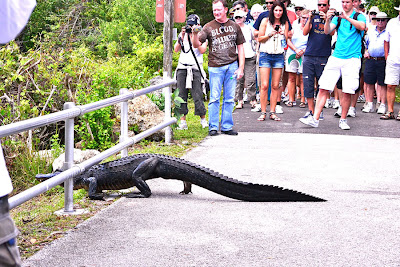 But then, a courageous and bold tourist took the first step, trusted the guide, and he walked right in front of the alligator, who opened his mouth and HISSED! That scared the shit out of the next tourist, a lady who walked briskly in front of the gator....Pretty soon the rest of the crowd followed one by one, quickly. At the very end, the tour guy from the tram gave the gator a slight poke in the tail, and the gator got back up on his hind legs and rambled across the rest of the path and slithered into the water on the other side.

Wonder how many people had to go to the bathroom after THAT encounter? (E. says, nobody wants to know, Sparky!) It was a COOL encounter with a gator! Despite what people think, gators do NOT go after humans. They have coexisted side by side in the canals in Shark Valley with the visitors for years and years. They don't associate humans as a food source because humans in the park don't try to feed them.  We look tall and intimidating to them, they are more interested in short little things on the ground. They may hiss but it's what they do to when they aren't sure what their next move is themselves. Now, they WILL go after a little dog....and apparently, a little dog in the midway campground almost got taken  the other day as he was chasing a frisbee near the pond.

People walk and ride the paths daily at Shark Valley, crossing in front of the gators day after day after day....and there's never been a problem. At least that's what Eldo keeps telling himself when he's just a few feet in front of them....Of course, when one rises up on his hind legs and starts to move, EVERYBODY still has a temporary cardiac arrest for a heartbeat! We're heard a couple of different things...when the gator's eyelids are closed, no worries. When they are open, be on alert. When the gator gets up on his hind legs, BE PREPARED! For what, we don't know!  They wouldn't let people walk the paths if alligators attacked humans, so really, it's not a worry.....

We biked 14 miles today in Shark Valley....a terrific trip! We highly recommend it. Oh, I almost forgot! We saw a solitary roseate spoonbill feeding in the marsh, very close by. Woo-hoo! 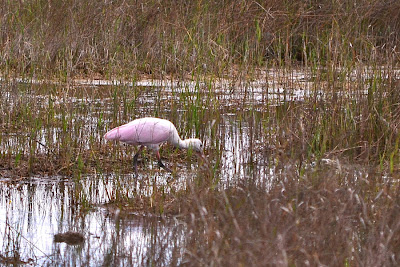 Here's another view...very cool to see them sweep their spoonbills from side to side to get their food.... 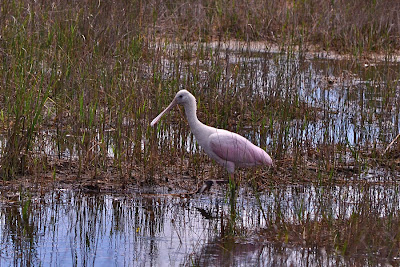 If you REALLY don't want to see gators up close and personal, take the tram! Nineteen dollars a person....More fun and exciting and CHEAP to ride a bike if you ask Sparky. Up close and personal, that's the way she likes it!   :-) (Yep, that she does! That woman is shortening my life, she's such a risk taker! sighs E.)  See you tomorrow!
Posted by Jeannie and Eldy at 11:45 PM

Email ThisBlogThis!Share to TwitterShare to FacebookShare to Pinterest
Labels: alligators, Shark Valley in the Everglades, spoonbills