Sparky has a new kayak, a Sea Eagle 385 Fasttrack...highly recommended by Karen and Al of RV Travels with Karen and Al, and Nick Russell of Gypsy Journal fame, and many others. Actually, Sparky and Eldo have TWO new kayaks, because for the internet special, buy one, get a second hull FREE until Feb. 29th!  You buy the 385 Fasttrack, you get the Sea Eagle 330 hull only along with it! Sparky has been trying to save for a long time, and finally, the time came with a little help from Uncle Sam....She ordered it from Inflatable Boats 4 Less and it arrived within five days time....She kept track of the tracking number day by day, anxiously awaiting its arrival....Today was the day!
Step 1--Watch the Youtube movie on how to set it up. This is gonna be EASY!    Check!

Step 2--Unpack the boxes without slicing the kayak fabric when opening the heavily taped box. Check! 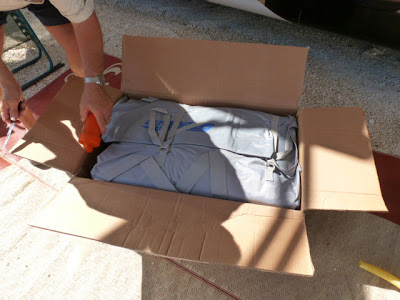 Step 3--Try to figure out what nozzles go with what hose contraption which goes into what hole...
Call Inflatable Kayaks 4 Less.    Check!
Most of the nozzles are for an array of OTHER foot pumps, not the ones you need for the boat.

Step 4--Open the air intake nozzles by doing a little twist turn with your fingers. Check!

Step 5--Stick the air hose into the inlets and pump away. 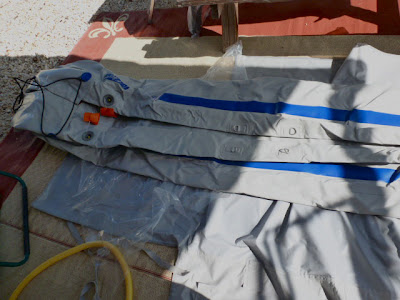 Dissassemble the air hose because you put the hose into the OUT hole, not the IN hole. AHEM!  Inflate the four air chambers in the boat.  That took less than a minute per valve.   Check! 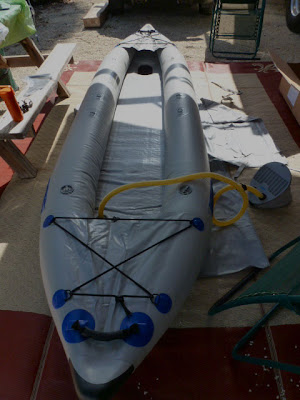 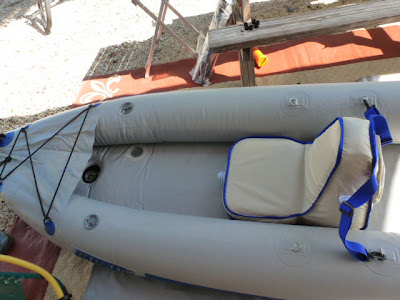 Step 7--Try to deflate the foot pump bellows. Not working.  Call Inflatable Boats and by the way, put them on speed dial. Check! Forget anything? Yup! The skeg! It won't go in the slot with the bottom inflated. Deflate the bottom of the boat, insert the skeg and inflate the bottom again...check!

TADA! Piece of cake....Well, sort of......Once you figure out that half the little doo-hickies that are in your package are not needed for the boat assembly and inflation, it's a piece of cake! First impressions? the seat doesn't look like it goes with the boat, but that's ok, they are VERY comfortable. We'll see after Sparky takes it out for a maiden voyage. Hmmmmmm...Sparky's gonna need a bottle of wine to christen the boat...heh, heh, heh! (Sigh......) That was Eldo who affirms that 1) Sparky will NOT be drinking before she goes out in the boat, and 2) she's not dumb enough to smash a glass bottle over the bow of an inflatable boat! Well, actually, I hadn't thought of that! But good point!

Step 8---Try the boat out on the water.....Nope....it's too windy today....16-20 knots...Not gonna happen! Rats! Sparky was anxious to get out on the water, but with the wind a-blowin' today, she could just see having to call the marina and somebody come out and tow her in, not being able to beat the wind to get back to shore. It didn't help when some guy down at the marina when asked for advice about going out today said, "SURE! Why not? Be the explorer! There's lots of islands around here. The wind will just blow you into one!" And he wasn't kidding, he really was suggesting it would be ok. But Sparky is not stupid..She's gonna wait for a better day....Especially after a second opinion said, "Well, don't go out with the marina's phone number in case you need to be towed back in!"

Really, it was a breeze setting up the kayak....Now Sparky just needs: a pull cart, some special waterproof gear to hold her camera and her phone, a whistle, some flares, a new life jacket.....(Uh-oh! I can see where this is going, but guess it's better than craft supplies! says E.)

Inflatable Boats--great company, great technical support-in Sparky's case, great general support, nothing technical about it...(Especially if she would read the directions that came with the darn thing, but NO-O-O-O........explains Eldo.) Heck no, ever try to read a general set of instructions that isn't written in plain English, and doesn't contain a million different references to other makes and models of a similar thing that isn't the same one in front of you as it is in the diagram? Sparky rests her case!

See you out on the water tomorrow---MAYBE! It's supposed to be windy tomorrow, too! (Well, the boat is going to be there from now on, so patience, Sparky, patience! says E.)   Sigh................It turns out that Sparky is going to have to wait for another destination to take the boat out on the water...sigh! No time left to take it out on the water. We have to get ready to leave soon....We'll definitely show you the boat again soon.....stay tuned!
Posted by Jeannie and Eldy at 11:26 PM