How Much Can a Honda CRV Hold?

Would you believe.....two sets of golf clubs, multiple tubs, one full crate of stuff, one full laundry basket, two sets of walking poles, one set of kayak paddles, three bags of clothing, one Brake Buddy, USPS mailing boxes, bubble wrap, two pairs of golf shoes, two coolers, one tote bag with 6 discs for frisbee golf, two bike helmets, one bathroom scale (I didn't know you had that! says a surprised E. You mean we can find out how much weight we've gained this year?) YOU can, I'm gonna conveniently forget we have it in the car! Actually, I think we've lost a little weight this year, or at least we're maintaining. Nobody has gone up a pants size--Yay! Let's keep going here, I'm on a roll......a portable file cabinet box, 2 jugs of distilled water, two tire covers for our previous motorhome (anybody want to buy two boxed sets of paired tire covers, ADCO size #1 (for 33"-35" tires) Ultra Tyre Guard polar white in color with the bungee ball securing system?) No? Guess we'll carry them along for awhile longer. Somebody with a gasser could probably use this size.

To continue,  three tote boxes full of yarn, a fanny pack, a backpack, a carryon piece of luggage, a tote box full of ball caps and other various styles of hats AND two portable camp chairs. Whew! I think that's it! I think the neighbors thought we were having a yard sale--but no, just cleaning out the cargo area. (Hm-m-m-m, I think I should have put a yard sale sign out while she was gone to the car wash place, says E.) Well, we need this stuff. It all stays in the back with the two rear seats folded up to the front ones. We're like a lot of full timers, we don't have room to take anybody with us in the car because of all this STUFF! You want to go somewhere with a full timer, you'll have to drive yourself there to meet them because they don't have any room in the car for you! (But WE'D make room for YOU, we'd just dump everything back at the site under the rig, says E.) Yep, that's right, we would! 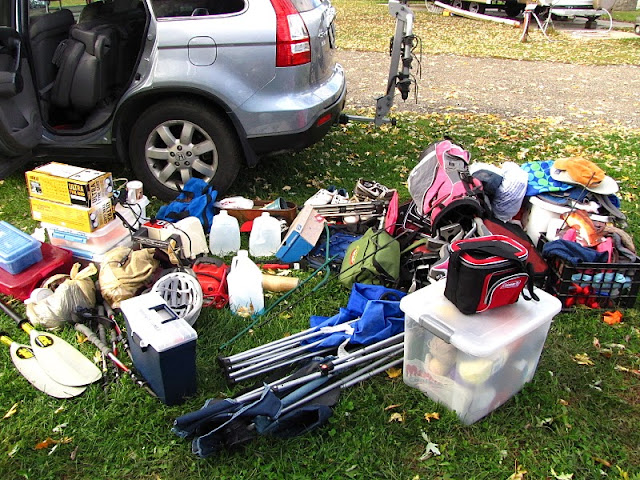 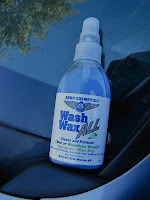 What got me started was Eldy cleaning the outside of the car. He tried his new stuff, the Wash Wax All.  He got some free samples along with his kit he bought at the rally...He just sprayed it on with a damp micro fiber cloth, then wipe if off right away with a dry micro fiber cloth. That stuff was amazing! The car looks so beautiful on the outside, I thought it was time to do the inside. So I dumped everything in the yard, went and vacuumed the interior and then repacked the car when I got back. And this is the Honda all cleaned up.....She looks like new! And the finish is slick! 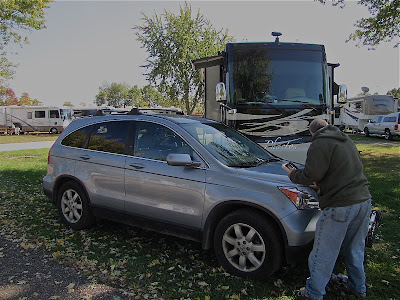 Thank you for the GREAT job on the car, sweetie! It sure beats rubbing the old wax on, letting it dry and then polishing it off by rubbing so hard with the cheesecloth that your arms ached for days afterward. This is how we did it when we were kids, waxing my dad's cars in the fifties and sixties. Only he had us put car cleaner on first, rubbing in overlapping circles to get the "oxidation" off the car, then rub the cleaner off, then repeat the whole process again with the Simoniz car wax. He would buy yards and yards of cheesecloth, then cut them up into polishing cloths. That whole carwash and wax thing--what a chore! 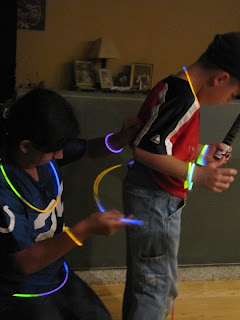 We had a great time at Eldy's son's house last night--We saw Eldy's kids-- Kristi and Brian and their spouses,  Ted and Lori.  Eldy's brother Gary and his wife Michelle came to see us, too. We saw the grandkids, played with the grandkids, watched a little football (Eldy watched a LOT of football with his brother, son and friends) and we ate a lot of great snacks that Lori fixed. The kids had a GREAT time with some neon toys. They decorated themselves and had a great time amusing themselves for more than an hour with these neon tubes that could be extended and connected and made into necklaces and bracelets. The boys were just as interested as Cate was. We've seen those at fairs and festivals--great idea, whoever thought of those things!  It kept the kids busy for a LONG time!


The fellas watched the game out in the garage with a heater going, while some of us gals braved the chilly setting as well. It didn't seem to bother the "baldies!"
It was a great game and Eldy was happy-- Notre Dame WON!--Sparky says WHEW! We'll see you tomorrow....it's DENTIST DAY for Sparky, wish her luck for no fillings needing to be repaired, and no loose crowns! Sparky will see you tomorrow in Angola, IN.....Eldy is going to stay in Elkhart and work on the coach with his new wash system.
Posted by Jeannie and Eldy at 11:30 PM

Email ThisBlogThis!Share to TwitterShare to FacebookShare to Pinterest
Labels: cargo capacity of a Honda CR-V