That's not news to my girls, Kelly and Kerry...They don't have children yet, but they know I'm a step-grandma to Cate, Connor, and Trevor. Today was Grandparents Day at Trevor and Connor's elementary schools. Luckily one celebration was in the morning, and one was in the afternoon, so we made it to both. 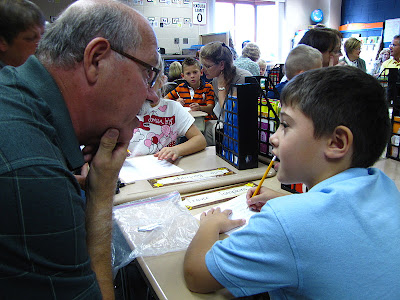 Eldo has been "Papa" ever since they have born. I'm  a new addition to the family and the kids haven't quite decided what to call me. I answer to just about anything. They just call me "Jeannie", and I think that's great! (Eldy's wife passed away five years ago.) The kids have welcomed me with open arms and I'm really glad to be in their lives. They are all delightful kids and well behaved. Anything that gets me back into an elementary school where I spent so many years of my career is a treat for me, so when Eldy mentioned Grandparents Day, he knew I'd be right there with him. There wasn't any way I'd miss that! 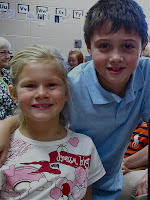 First, Trevor's class.....play a little word game, get introduced to Trevor's "girlfriends"....hit the book fair with Trevor, pick out a book that will help Trevor learn to read more but seemed to disappoint him because it wasn't the thick unreadable book he wanted. Sparky had to get back into his favor by promising him a trip to a MAJOR bookstore to get a Lego sticker book.

I think Eldy had almost as much fun as Trevor did at school today..... 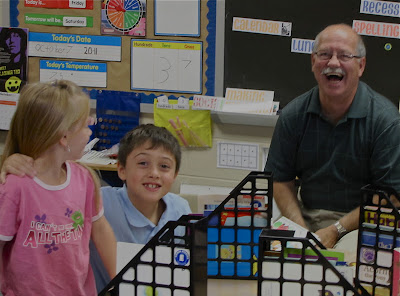 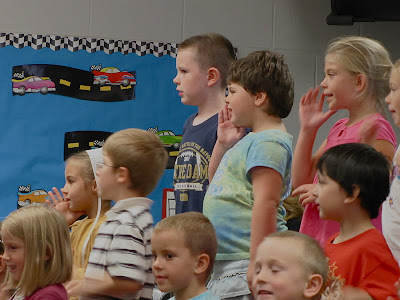 On to Connor's school....Connor was outside at recess when we arrived at the parking lot. He saw us coming up the sidewalk and was jumping up and down at the kindergarten fence, yelling, "HI, PAPA! Hi, Jeannie!" We were later entertained by a great display of singing and nursery rhyme mastery and Sparky's favorite part of the school day--snacks! It was hilarious to see how much energy some of the little boys had and their antics while performing had the grandparents in stitches. This little guy was to the far right of the group, and he just carried on without a clue what the other kids were doing. They were all facing towards the teacher on the opposite side of the room, but not him! But you had to give him credit for trying....He had lots of enthusiasm! 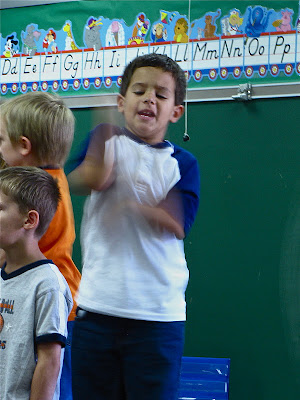 Connor's teacher explained the latest teaching techniques that she uses in her kindergarten curriculum and it was great to hear the variety of methods being used to teach the class. Here's "Papa" and Connor....
We had lots of fun at school today...Well, Sparky did anyway...That's her element--a room full of squiggly, wiggly cute little kids with funny things to say and expressive faces that are so honest and endearing, it makes her want to get back into the classroom! (Too soon! Too soon! We've just begun our travels! laments E.) Don't worry, honey....It was a fleeting feeling...But I would like to sub some time, or volunteer or tutor...and I'm sure some day I will be able to do that. For now, there's too much we still need to see and do......Until tomorrow......Sparky and Eldo
Posted by Jeannie and Eldy at 10:30 PM