As we drove towards Elkhart, yesterday, I started watching for the Amish buggies. Eldy was watching too..Because you share the road with a large Amish population once you get to Elkhart County and LaGrange Counties, you've really got to pay attention. Shipshewanna, Middlebury, Bristol...some of my favorite stomping grounds...Not only do you have to watch for buggies, but also wagons, and the Amish and Mennonites on bicycles. And here come the buggies... 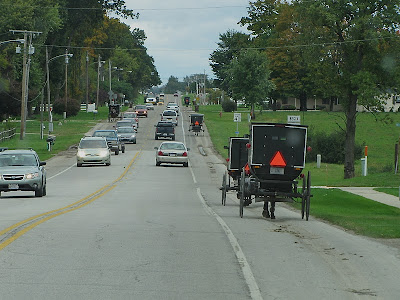 Eldy said there was a terrible accident last week where two Amish wagons carrying children pulled out of a private drive in front of an SUV. Young Amish children or teens often drive a pony powered wagon around the farms and county roads. Two children were killed and four were injured. The car driver was not at fault and was not cited. You have to be extra vigilant driving in these counties. Many of the roads are really not very big for buggies AND cars or other large vehicles...You need to drive even SLOWER when there's a lot of Amish activity going on--Saturdays are a big shopping day for them.
There was a HUGE fall craft fair going on in Shipshewanna as we passed through town.  Sparky really wanted to stop, and Eldy tried to accomodate, but we weren't able to find any parking for the MH and tow, so we continued on our way. We are going to come back through town after Cate's soccer game to visit some great places in Shipshewanna--The Blue Gate Restaurant and their bakery, the flea market, Yoder's Department Store, Lolly's Quilting shop and my personal favorite--Jojo's Pretzels.

It's off to see the grandkids' soccer games today...Eldy's oldest grandchild, Cate, plays a mean game of soccer. She's one of the youngest on her team, as the player levels range from grades 6-9, but she holds her own, that's for sure! Sparky used to coach her own girls' soccer teams, and she played adult soccer in her thirties, so she really enjoys watching the kids play. (It's all she can do to keep from yelling out instructions!) What can I say? Old teaching/coaching habits die hard! Cate did a great job today and her determination and grit showed! 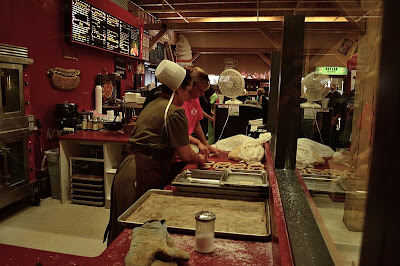 On the way home from the soccer game, we stopped in Shipshewanna. Sparky went exploring with NO money-- (She forgot her purse, awww, that's too bad! says E.)  W-A-A-N-N-H!  But I saw some great stuff and some cute stores I hadn't known were there. One was a yarn shop with the coolest handspun fibers. (Uh-oh!) We also managed to stop at the pretzel place--Jojo's for a homemade pretzel, best in the midwest! My favorite is the sour cream and onion one....before we leave, I'm gonna buy a bunch and freeze 'em! And I scoped out the fabric and yarn shops. They have some GREAT ones in Shipshewanna!

Tonight we head over to Eldy's son's house for a FOOTBALL/WELCOME HOME party......Rah-rah! Go Notre Dame! Hope Notre Dame wins--Eldy is a RABID Notre Dame fan--that means when they play, he doesn't sit down and just watch if the game is exciting...He's up jumping around and hollerin', "GO "D"! C'MON, D!!" (For you ladies, that's "D" as in Defense)...If they lose, he's not fit to live with for about an hour.....Sparky is not the only pouter in the family! Even if you're not a Notre Dame fan, cross your fingers! Sparky thanks you!  See you tomorrow.....
Posted by Jeannie and Eldy at 10:30 PM