Heart Attack on a Plate 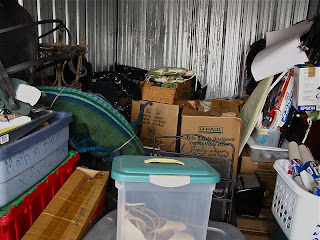 We'll get to that in a moment...off to visit the storage shed from Hell, AGAIN! About a fifty minute drive on the toll road over and back, that's the quickest way to get to Angola/Fremont, where our messy storage unit is...We've pared down some, sold some stuff, and now we think by the end of the month, we can cram what's left into a DIFFERENT storage shed and a much smaller space for less money...$348.00 a year for a 5 X 10 ft. unit in a location very close to the Elkhart Campground. Lots less than what we are paying now come a rate increase in January..(I don't know, I don't know, I don't know...) That's Eldy muttering to himself, wondering how in the WORLD we are going to get all of Sparky's crafts and some of her mother's furniture into a smaller space....CRAM, honey, CRAM! We can do it! We can do it! See, we've cleared so much stuff already, you can see the walls now! (Then there's the truck rental, mileage, how many trips will it take to move everything...hmmmmm...mutters E.) 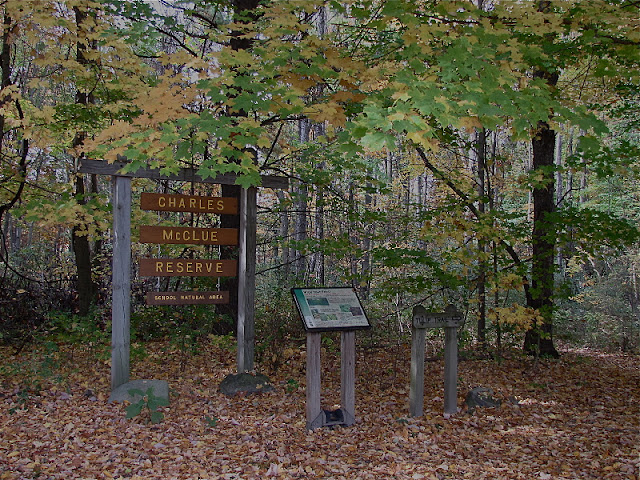 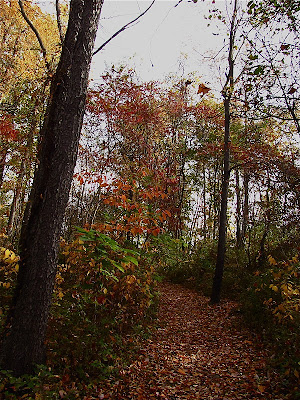 While in Fremont, Sparky wanted to visit two other nature preserves in town, to see how they were holding up after some severe wind storms in the past few weeks....The Fremont/Angola area is a GREAT place to hike...there are at least THREE Acres properties--preserves that are for the enjoyment of anybody who wants to come for a walk in the woods. Then there is a gorgeous state park, Pokagon State Park, on the shores of Lake James in Angola, which is right next door to Fremont...There's also McClue Preserve, off county road 400, near the main drag of Angola, which I visited for a short time today. It has been heavily damaged in the wind storms. Notice the little shoe scrubber at the bottom of the sign below on the right that says, "Wipe your feet!" They are worried about invasive species taking over the forest! We've seen that everywhere we go, WE'RE BEING INVADED!!!! By the plant zombies!!!!  (Sparky is getting a little silly in her old age, don't you think? asks E.) Aw, I'm just getting in the Halloween spirit, honey! (Wait till you see how she's decorating the site for the grandkids this weekend!) SHHH! It's a surprise!

But--the trails are still open.....and then there's Beechwood, over by the outlet mall in Fremont, an absolutely beautiful, hilly nature preserve that meanders through cricks (creeks to some) and apple orchards....The fall colors are awesome! 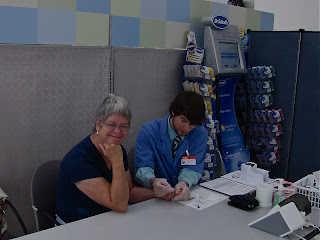 On to get some blood work done...Sparky wanted some basic levels checked before applying for life insurance, so she decided to take advantage of relatively cheap tests run by the Meijer pharmacy. Seventy-five dollars for a liver function test, 2 tests for blood sugar levels, and cholesterol. Never mind that the kid doing the test looked young enough to still be in high school! He was a very personable guy and seemed to know his business. Sparky gave it her best "Ooooooh, I hate the sight of blood" look, not realizing it was all done with pin pricks to the finger and not tubes and tubes of blood...Forty-five minutes later, she found out she had improved cholesterol scores from last year by quite a bit, due to all the hiking and biking, and less eating out bad breakfasts on the way to work daily....AND overall blood sugar was excellent! AND--Eldy had an excellent A-OK blood workup last week...SO-OOOOOOOOOO......This is where the heart attack on a plate comes into the picture--- 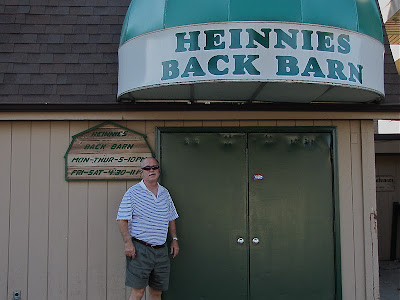 We went to Heinnies Back Barn restaurant in Elkhart, IN for supper tonight.....Now Heinnies (pronounced Hiney's like your rear end) has the most fantastic steaks and mushrooms which are very reasonably priced. We're talking 17.99 for a 6 oz. filet, BUT THAT IS NOT WHAT WE ORDERED. And Eldo is always looking for a food bargain when we eat out...Sparky, on the other hand, is always looking for just food! (I swear, that woman of mine is ALWAYS hungry!) Eldo sees the 30.00 steak dinner for two, and decides that's a HECKUVA bargain.....Sounds good to Sparky, but she didn't see the 36 ounce steak description underneath the special or she would have put her foot down!  (But not far enough to get me to change my mind, says a determined E.) The hardest part? I like my steak EXTRA RARE, PITTSBURGH RARE, still MOOVING rare, and Eldy likes it medium rare...So what are we gonna do? We compromise, he says he will accept rare, I say I will accept rare, and it's a done deal. (Who does it sound like got the raw end of the deal here?! E. wants to know!) 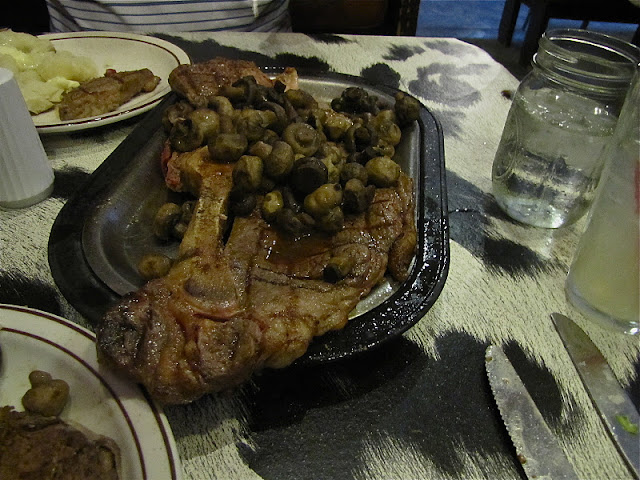 And out comes this humongous, obscene steak...I mean, it was EMBARRASSING! But we dug in anyway....That steak special came with a wonderful baked potato and a huge salad with lots of stuff in it and the best blue cheese dressing ever!  Boy, was it good, and NO, we didn't finish it off,  I think we brought half of it home.....But hey--what a deal! Right? We'll get a second meal off it! Great food, Heinnie's, fantastic tasting steaks, they actually have FLAVOR, and one of Elkharts most popular restaurants. I think I need a nap now.....We'll see you tomorrow...Sparky is off to South Bend for car recall repairs and who knows what else!? Eldo will hold down the fort in Elkhart, maybe do laundry? (Hint, hint! suggests Sparky)  Bye-bye.......
Posted by Jeannie and Eldy at 11:00 PM

Email ThisBlogThis!Share to TwitterShare to FacebookShare to Pinterest
Labels: storing our stuff