Holey moley! That's a lot of stuff in one day! Yep....Eldy went to the Notre Dame game with his son, Brian who had never really seen the campus in depth before. They went to the Grotto, the practice field, saw the band, and both teams coming onto the field. A Stealth bomber flew over the field right after the National Anthem! (That was really awesome! E. says.) He said it was really quiet as it flew over, not like the thunder jets make. Sparky will refrain from saying, duh! That's why they call it the Stealth bomber, because Eldy said immediately upon relating the story that he could see why it's hard to detect it and that's why it is called the Stealth bomber. Is there an echo in here?

While Eldy was yelling himself hoarse at the fabulous fall football game today where Notre Dame shellacked Air Force 59 to thirty something--(You can tell who is not particularly a football fan here because she forgot the score), Sparky was out exploring Shipshewanna. GASP! Before Eldo has a heart attack, I better qualify that... I AM a Notre Dame fan, however.....Hey, the score doesnt matter, what does is, THEY WON!

I never get tired of wandering around Shipshe (Shipsee), the nickname the locals give it. I really enjoy watching the Amish buggies come into town for their Saturday shopping. I try to figure out the differences between the Amish and the Mennonites (time to do some research, Sparky!) and today, not having to worry about keeping Eldy waiting, I could spend all the time I wanted in individual stores. (And THAT is NOT a good thing, E. wants you to know. Sparky gets in trouble when I'm not along for the ride. She can have as much time as she wants, but she doesn't come out with as many bags nor as big as when I'm there waiting in the car.) And he'd be correct! I hate to keep him waiting even though he says he doesn't mind so I tend to rush my window shopping and purchases when we're both out and about.  But I was pretty good today....(That's because she's already been to Shipshewanna twice while we've been here! clarifies E.) I bought some small notions for  Christmas ornaments, and that's about it! (Are you SURE?) AHEM! Maybe one skein of yarn, too.  I was mainly looking for "story" photos--you know, a photo that has more to say than just a pretty picture.....Like this one..... 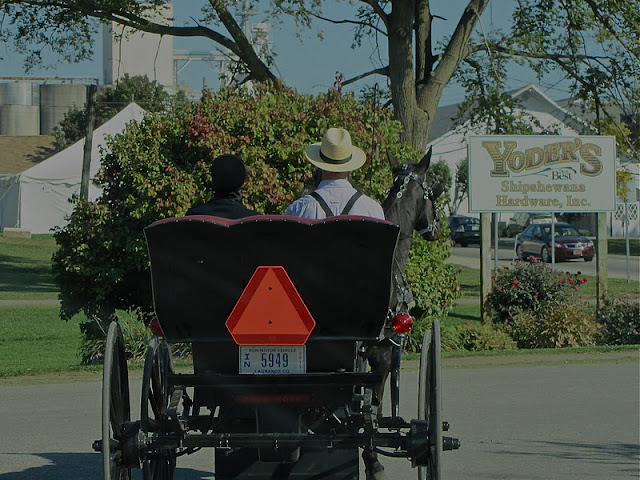 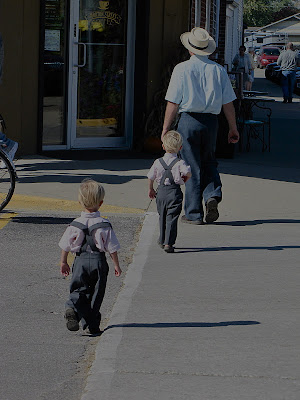 I first saw these little guys (right photo) peering out the back window of their enclosed buggy when I was pulling out from a shopping center. Now THAT would have been really cute photo...but you are not supposed to photograph the Amish. They appeared to be twins. They ended up parking their buggy in the same lot as my car and off they went following their dad to the next shop. Their clothes are all handmade, shirts and overalls, and these two little guys had the same identical "bowl" haircut.

Some day I'd really like to have the opportunity to spend time on an Amish farm for a day. I'd just like to learn more about their lifestyle. It's a little confusing to me what they are allowed to have and not have. Different sects allow different amounts of the "material" world in. Like some are allowed phones, but the phones are in a little building out by the side of the road. The little white buildings almost look like outhouses. I thought I had a photo of one, but apparently don't. I always thought those little white buildings were shelters for the kids to wait for the school bus, not realizing that many of them go to their own school and DUH! They wouldn't be riding a school bus to get there! (Sparky can be a little slow processing information all the way through sometimes! explains E.) Yep! There's a reason I managed to stay a special ed. teacher for 34 years! I understood those kids! I had some of the same problems and still do! Back to the phone booth building. You can see a phone line box coming out of the side of the little building if you look carefully. 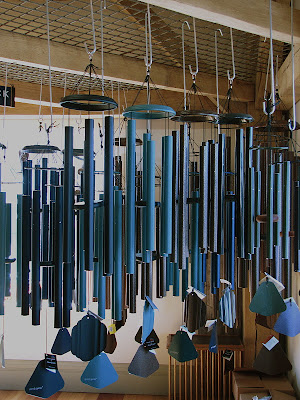 And back to exploring Shipshewanna....I visited a store I have always wanted to check out. It was called Simple Sounds. It had wonderful wind chimes--one played the first few notes of "Amazing Grace". It was ONLY 126.00! Too big for the motorhome.....(Whew! That was a close one! E. wipes his brow) But it had really cool instruments you could tap on and play on that made the neatest sounds!  All kinds of music books--"Teach Yourself the Pan Flute"...which I've always wanted to learn how to play, but first gotta get a flute! Eldo is worrying about my next purchase, I can tell....It's just a dream I have at the moment...probably one I'm not going to pursue for some time.....When you are retired, you just think a lot about all kinds of things that might be interesting to pick up and learn, ya know? At least I do...Like maybe a tongue drum, which they had several of. I have no idea why it's called a tongue drum unless the originals were made out of them?  Here's a link so you can hear the cool sounds of it...tongue drum This burgundy one had some really deep tones to it, it was cool! 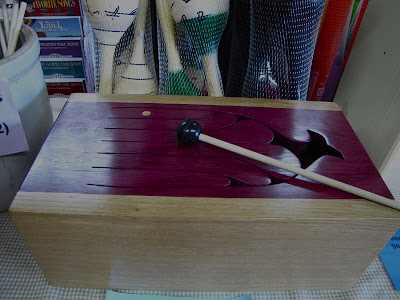 I visited a little taco stand for lunch on a boardwalk between streets and the chicken tacos were the best ever! The owner said it was hard competing with all the big established stores surrounding her stand, but she was hanging in there. She was not allowed to hang signs where they could easily be seen to help customers find her taco stand--which was unfortunate, because her food fare was outstanding! 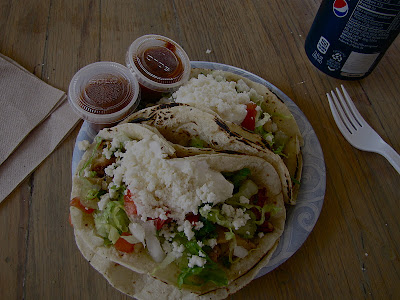 On to Fort Wayne to see friends celebrating a big 6-0 birthday.....Darryl is the birthday boy.....Sixty years old....I told him he's officially now an "Old Fart"! He sure doesn't look sixty! 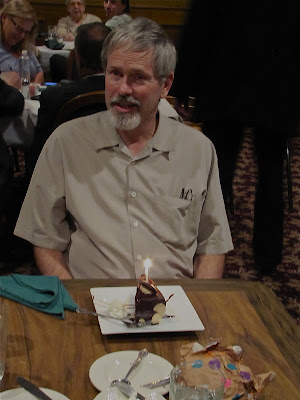 We had a nice meal at Don Hall's Restaurant in Fort Wayne, IN...It was great to see old friends that I used to hang out with and hadn't seen in over a year, some even longer than that. Quite a few people there had lots of questions about full time RVing which were fun and sometimes challenging to answer...Like, "What's your favorite place you've been so far?" Um-m-m-m...Oregon and Washington coast, Bar Harbor, Maine and Acadia National Park....Yellowstone, heck, there are MANY!   "What's the coolest thing you've seen?" Hiking a trail that looks like it's going nowhere and all of a sudden you come out and see SIX waterfalls cascading down mountainsides into a lake. That was the Avalanche Lake hike at Glacier National Park....Again, there are many, many cool things, too hard to pick just one!
We are really blessed to be able to travel and keep good friends in our life, AND make new ones!...Even if we don't see our friends for awhile, we know they care about us, and can't wait to catch up when we see them again, even if it's not for a long time!
Posted by Jeannie and Eldy at 11:43 PM