Back Home Again in Indiana

Actually, I've been back for a few days, but wanted to share my trip to D.C. first...What have we been doing since I got back? Eye doctor appointments, seeing friends, getting things done on the motorhome like washing and waxing, and babysitting Eldy's grandson. Here we are below, eating at a really cute restaurant called the Down Under in Syracuse, IN. The restaurant entrance is just a little gazebo at street level, down a flight of stairs and then the entire restaurant is under ground!

It's been a LO-O-O-N-G time since we've babysat the grandkids....Eldy's daughter needed help with a school fall recess day so Connor, Eldy's youngest grandson, came to visit for the day...It was fun and exhausting at the same time. Sparky always feels like some sort of entertainment is in order since the kids are visiting in a motorhome and don't have all their "stuff" with them, so the day started like this:

8:00 AM--Sparky and Connor went off to McDonald's for breakfast...Connor picked OATMEAL for his breakfast--a surprise to Sparky. What, no donuts? No pancakes with lots of sticky syrup? Nope, healthy oatmeal...(He takes after his Papa, says E. proudly. That's one of my favorite breakfasts.) Play at the McDonald's Playland a bit, then off to Walmart to buy a pumpkin. You learn the most interesting things in a car ride with a young person. That's the best time to talk and the darndest things come out while you are driving and listening to your kids or your grandkids. Connor said that his mom likes country music and his dad likes rock and roll. He said he likes Toby Keith and proceeded to talk about "you know that song that Toby Keith sings about "a kick in the butt?" "No...." "Well, he sings some stuff and then he says you need a kick in the butt, but he doesn't say butt, he says that word I can't say." "Oh, yes, I know what song you mean, Connor. I like that song, too!"  "Hey, Connor, are you going to want popcorn at the movie?"  "No, I'm not really into popcorn right now." "Oh, what are you into?" "I'm into the movie." "Oh! That's good!" And we were off and running.....

9:00 AM--work the Sparky step grandma angle at Walmart..."Jeannie, will you buy me a Hot Wheels?" "How about just one? They don't cost very much."  "Can I have a "yummy" at the checkout?"  Sparky held her ground on the Hot Wheels, but succumbed to Connor's charm at the checkout. How can you not resist this sweet little face? (I can! emphasizes Eldo.) 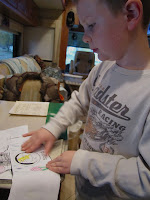 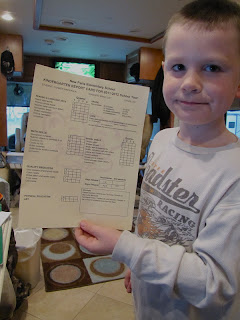 10:00 AM--Connor played with Papa's ipad and Sparky baked some chocolate chip cookies..before you guys all think I'm awesome because I baked homemade cookies for Eldy's grandson, I have to confess they were those little premade squares Nestle Toll House chocolate chip cookies you just pop in the oven. They still taste great, though! Eldy and Connor can attest to that! After eating several cookies, Connor whipped out his kindergarten reading books and read all of them to Eldy and I. Then he made sure we saw his excellent report card. He's a smart cookie, that one! 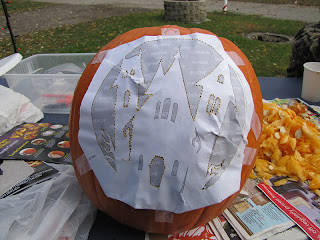 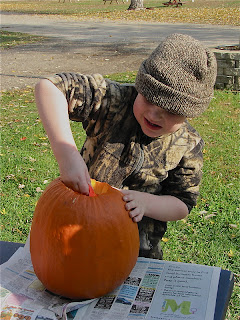 11:00 AM--time to carve pumpkins with the awesome PumpkinMaster Carving Kits--lots of designs in one booklet and about 6 carving tools for 3.87 at Walmart. You tape the paper design to the pumpkin, poke holes all along the design lines, pull off the paper and start carving through the hole sections.  Connor insisted on picking a too tough design for him (the Grim Reaper) so Papa and Sparky helped a bit... 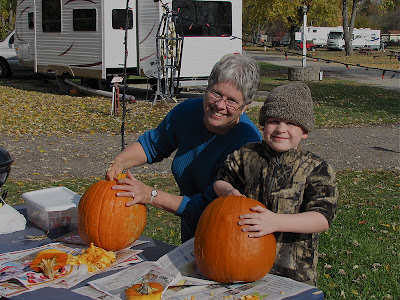 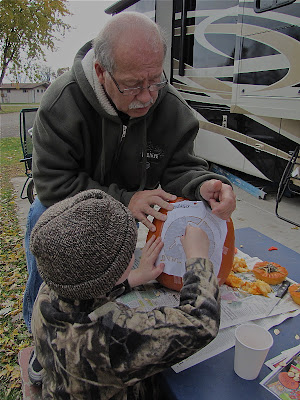 1:00 PM--Time for a movie! (see previous discussion Sparky had with Connor first thing this morning)....Sparky thought a Dolphin Tale would be a great movie to take a youngster to see...(SPARKY really wanted to see that movie, says E.) Connor wasn't quite as interested in the movie as Sparky thought he would be...Even after a bag of popcorn sprinkled with ranch seasoning which he absolutely loved, a BIG Icy frozen drink which he slurped loudly till it was bone dry and great viewing seats, Connor lasted about half an hour as far as paying attention. Then he was VERY antsy the rest of the movie, but he made it through with Sparky threatening to sit on him if he kept getting out of his seat. (You really threatened to SIT on him????? asks E.) No, just kidding...just had to grab his collar several times to keep him from wandering off to try and get refills on his icy drink! 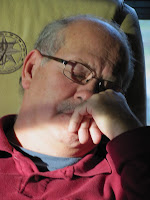 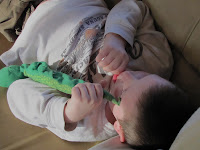 3:30 PM---back to the campground and the RV--time to play with Legos, monster trucks, pipe cleaners, and anything else he could get his hands on...."Jeannie, what's this?"  "Can I see that?"   "What's that thing for?"   "Can I have some more pipe cleaners?"  Finally, (whew! says a relieved Papa, a.k.a. Eldo), Connor started to wind down, and so did Papa......Sparky was still going strong!  She did three loads of laundry with Connor's loading at the laundromat while Papa held down the fort at the RV. Later, everybody just chilled......

4:30 PM--Mom came to get Connor, and things settled down for the evening here at the Elkhart Campground....Tomorrow is Notre Dame football HOME GAME weekend...we'll see what the day brings!
Posted by Jeannie and Eldy at 10:58 PM

Email ThisBlogThis!Share to TwitterShare to FacebookShare to Pinterest
Labels: a visit from Connor