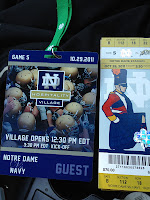 There's lots of different kinds of fun, right everybody? For guys, it's fishing, hunting, computers, messing with tools, woodworking, working on cars, watching sports or attending sports, girl watching,  etc. etc. (Hey, just because you are on a diet, doesn't mean you can't look at the menu, right? ) You KNOW that's Eldo talking!?  OK, you guys can make the rest of the list..movin' on here.....For Eldy, fun time today was attending the Notre Dame home game against Navy. Eldy got FREE tickets to the game and a hospitality pass which entitles you to all kinds of goodies! Like free food and drinks of all sorts....No wonder it took him so long to get home from the game! Just kidding...he actually left the game before it was over to avoid the traffic, as Notre Dame clobbered Navy....
Then, there's OTHER kinds of fun that women like to have! (Oh, boy, NOW you are really going to get the comments, woman!) I know....Just don't send 'em to me...hahahaha...What I mean is, woman like to do different stuff for what they call "me" time---crafts, shop, (lucky Sparky didn't have the car today! says a relieved E.) read, chat on the phone, reorganize stuff, go through craft magazines and figure out what to make next, think about Christmas presents, on the other hand, I think I'll think about that one another day. Back to reading, sorting through recipes (HAHAHAHHAHA) That's Eldy laughing, because I don't like to cook, but at least I THINK about it! Maybe I'll surprise him some day and brush up on my cooking. (hahahahahha)  Sigh! And this is a guy who admits he can't boil an egg! There's a story behind that, but I'm not telling it today....(Thank you!)

So, while Eldy headed out to South Bend today this morning, Sparky readied herself for some serious "me" time--yakked on the phone to sister, friends, and my kids. (All that probably took awhile!) Yep! ..Next, clean house....Next, read magazines...Then surf the web, watch knitting videos,  exercise in the RV a little, watch the storm come in, watch the weather clear up, hop on my bike and ride for 45 min. all around town, oil my bike lock, and then put a BUNCH of stuff on Ebay to sell. That really takes time. I used to ebay all the time. I went to garage sales to find some cute or useful stuff and then posted it on ebay and waited for stuff to sell--or NOT. Like the "Friends" Trivia board game that I thought would be a collector's item. WRONG!
Having done Ebay for about seven years, I've gotten over 1300 in perfect positive feedback, so I really enjoyed it in the years that I did it and worked hard to have positive transactions.  Did I make any serious money at it? Nope! Did I make more than what I spent on buying the stuff? Yes, but not much. Basically, pizza, movie money, craft supplies money or "fun" money.

Recently, I decided to go through the storage shed and pull out some stuff to sell and put it up for sale today on ebay--a couple of shirts, some household items and a Bose remote missing the Bose radio (which got stolen a couple of years ago from our first rig) among other things. Then, back to sewing, blog a little, catch up on reading friend's blogs, and where the time went, I have no idea! But here it is, going on into the evening, sun has set, and the day is gone......It was a great day for both of us and we both had fun!  See you tomorrow!
Posted by Jeannie and Eldy at 10:30 PM

Email ThisBlogThis!Share to TwitterShare to FacebookShare to Pinterest
Labels: Two kinds of fun